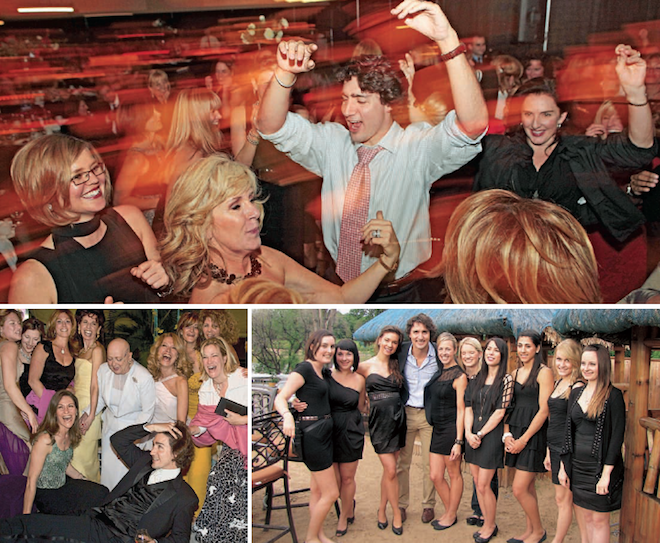 Those early Conservative attack ads against Justin Trudeau are being widely interpreted as not-so-subtly casting doubt on the new Liberal leader’s manliness. Among other telltale elements, they end with Trudeau’s name unscrolling across TV screens—with a fairy-tale spray of animated sparkles—in a rather feminine, cursive script. As well, the ads were aired heavily during sports shows, suggesting the target viewer was the hockey-loving male.

But how susceptible is he to being portrayed as not man enough? To make that case, Conservative strategists must overcome the image of Trudeau pummelling then-Tory Sen. Patrick Brazeau (since kicked out of the party’s caucus after being charged with assault and sexual assault) in a charity boxing brawl last year. And then there’s the factor documented by the photos here. The throngs of women Trudeau often attracts, despite his being a married man with two young children, do not appear to be pressing close to him in order to demand that he flesh out his economic policy.

Might male voters be impressed, or will they resent his effect on their wives and girlfriends? The sexes do seem to perceive him differently. An EKOS poll found that 20 per cent of men who’d seen one of the Tory attack ads found it fair, compared to just 10 per cent of women. (Most of both sexes, however, about 70 per cent, thought the ad was unfair, with the rest not sure.)

It’s possible the ads, particularly in light of their tactical placement in sports programs, represent a bid to counter a threat Trudeau already poses to the Conservative edge among male voters in recent elections. A Harris/Decima poll, conducted April 18-21, found that Stephen Harper was seen favourably by 44 per cent of men and 37 per cent of women. Trudeau beat him among women, perhaps unsurprisingly, with a 61 per cent favourable score—but was also rated favourably by 53 per cent of men.