Garth Drabinsky’s sentencing hearing began today. But the show could be far from over. 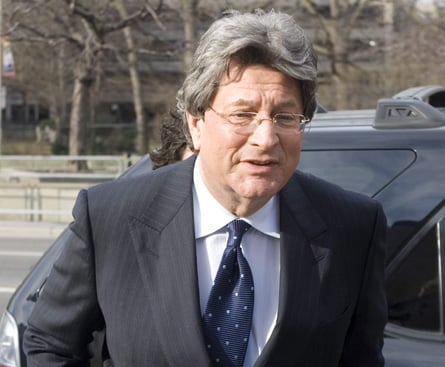 If there’s a lesson to be learned from the legal travails of Garth Drabinsky and Myron Gottlieb, which have turned into a longer running production than any of the spectacles they staged while at their theatrical company Livent, it’s that if you’re going to commit white-collar crime and preserve your liberty, Canada is the place to do it.

In 1999, the long-time business partners were indicted by a U.S. federal grand jury on 16 counts of securities fraud and conspiracy in New York, where they’d face up to 140 years in prison and fines of up to US$16 million if convicted. The two remained safely ensconced in Canada where they were charged criminally in 2002 after a four-year RCMP investigation. The case wasn’t heard for nearly another six years: their 13-month trial ended on March 25 of this year when Ontario Superior Court Justice Madam Justice Mary Lou Benotto rendered a guilty verdict, convicting the two men each of one count of forgery and two counts of fraud between 1993 and 1998, the period during which Livent was publicly traded and raised more than $500 million from investors.

Each of the fraud counts carries a maximum jail term of 10 years while the maximum sentence for forgery is 14 years. The sentencing schedule too has stretched out. Originally scheduled for early June, sentencing arguments commenced today due to a conflict in the judge’s calendar. This morning, Crown Attorney Alex Hrybinksy asked the court for eight to 10 years in jail for both men, arguing that Drabinsky and Gottlieb deserve significant penitentiary stays due to the “enormous” size of the fraud and the fact neither had shown any remorse during the trial. Crown prosecutors also produced examples of sentencing in similar fraud cases in Canada with jail terms ranging from six to 15 years.

In a nice bit of irony, Greenspan even alluded to the fact the Canadian legal system is not as severe as that in the U.S., where his former client Conrad Black was charged, tried, sentenced, and has served more than a year of a six-year term in jail since Drabinsky and Gotlieb were charged: “In the Canadian system we recognize that sentencing is a human process. There is nothing wrong with compassion,” Greenspan told the court. Gottlieb’s lawyer Brian Greenspan will address the court tomorrow. And Judge Benotto is expected to reserve her decision on sentencing until later this summer.

If Gottlieb and Drabinsky receive jail time, which many legal observers believe is likely, they’ll be taken directly into custody where they’ll await “judicial interim release,” the modern term for bail, pending their appeal before the Ontario Court of Appeals. How long they’d stay in custody could vary between as little as a few hours but more likely a few days.

Such a release is likely, says Toronto criminal lawyer Scott Hutchison, who observes that Canada has a more generous approach to bail than the U.S. The Court of Appeal judge requires at least one arguable ground for appeal in the form of proof that mistakes were made during trial or in sentencing. The court must also be convinced that serving any jail time would constitute a form of “prejudice”—in other words that it would be unfair to have to sit in jail if there are grounds for appeal. The court would also need to be convinced the best interests of the administration of justice are being served—meaning that Drabinsky or Gottlieb won’t commit crimes if released and will surrender into custody for the appeal. (The one wrinkle, says Hutchison, would be a scenario in which the two were sentenced to 10 years and a judge concluded that they couldn’t reasonably expect less than five years of incarceration, in which case serving time in prison before the appeal would not occasion prejudice.)

Any appeal would likely take at least a year to be heard, says Hutchison, due to clogged courts and the time required to generate transcripts. In the U.S., it tends to happen more quickly, he says. The Crown usually agrees to bail in such cases, he says: “Sure, they could argue that it’s a serious offense and that it looks bad for the administration of justice but that has to be met with ‘Yes, maybe it looks bad but the public doesn’t know how sentencing works. And what benefit would it serve for them to be incarcerated awaiting appeal?’ ” Fortunately for Drabinsky and Gottlieb, the desires of a public stoked on dramatic, cathartic finales have no place amid the slow grinding wheels of Canadian justice.