The British invented the tank: an armoured vehicle that could roll over both wire and trenches. The problems, however, were many. 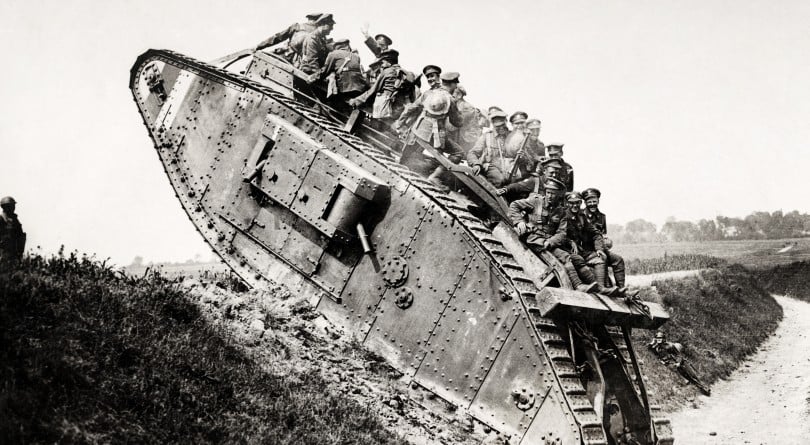 Canadian soldiers climbing the side of a sunken road in a tank during the First World War, circa 1915. (Popperfoto/Getty Images)

“The machine gun,” British Field Marshal Sir John French supposedly said, “has no stopping power against the horse.” With their equine mobility, with their swords and lances, and with the power of a massed charge, the cavalry could continue to rule the battlefields of the Great War as it had for Napoleon. Certainly, generals and cavalrymen believed this in 1914, and the early battles of the war saw cavalry squadrons play a role. But the machine guns did kill horses and their riders, with heavy losses.

Once the war became a battle fought against well-fortified trenches, the role of the cavalry became very limited. The horsed men could be employed to exploit a breakthrough, of course, but there were none. The regiments waited behind the line, eating up resources and tying up tens of thousands of soldiers. Very soon, most of the cavalrymen were converted to infantry and sent to hold the line. But a few generals continued to believe in the horse and kept regiments ready to ride.

RELATED: How Canada fought its last battle in the First World War

In the meantime, deeper thinkers were searching for a way to break through the Great War’s battlefield, where barbed wire protected the trenches and the machine gun and artillery ruled. The British conceived the tank: a tracked, armoured vehicle that could roll over both wire and trenches and be invulnerable to small-arms fire. The problems, however, were many. The tanks broke down with alarming regularity, and the heat and fumes inside choked the crews. Enemy artillery—and soon specialized anti-tank guns—could knock out the tank. But the effect on morale of watching a tank come close, firing its machine guns and crushing everything in its path, was huge. Even brave soldiers fled, and the British troops moving forward behind the armoured beasts felt that nothing could stop them. At Cambrai in 1917, the use of large numbers of tanks almost created a breakthrough. Almost, but not quite.

By the summer of 1918, the tanks had improved. Some could carry a section of troops or supplies inside; others could put soldiers on top and move them forward. Their weaponry was better, their reliability somewhat improved. But the fumes were still noxious, the enemy anti-tank guns more skilful. At Amiens on Aug. 8, 1918, 342 new Mark V tanks helped the Canadian Corps stage one of the biggest advances of the war. “Machine guns were everywhere,” Lance Corporal Ken Foster in the 2nd Battalion wrote, “but fortunately for us the tanks soon put them out of action . . . Without the tanks, I’m afraid it would have been a hopeless task.” By the fourth day of battle, only 38 Mark Vs were still operable, the rest knocked out or broken down. In the next weeks, in the Canadians’ struggle to crack the Drocourt-Quéant Line or cross the Canal du Nord, very few tanks were available, and soon the cavalry came back.

With the Germans fleeing eastward after their supply centre of Cambrai was liberated, the cavalry could range ahead of the plodding infantry and keep contact. But the Canadians also had two brigades of armoured cars armed with machine guns that did the same task and had more effective weapons. It was also easier to get gasoline forward than forage and oats for the horses.

The Great War demonstrated that the age of the cavalry was over. The horse still could pull a wagon or a gun—the German Army in the Second World War continued to rely heavily on horse power—but cavalry had ceased to be a major offensive factor.