An at-a-glance survey of some of today's top stories 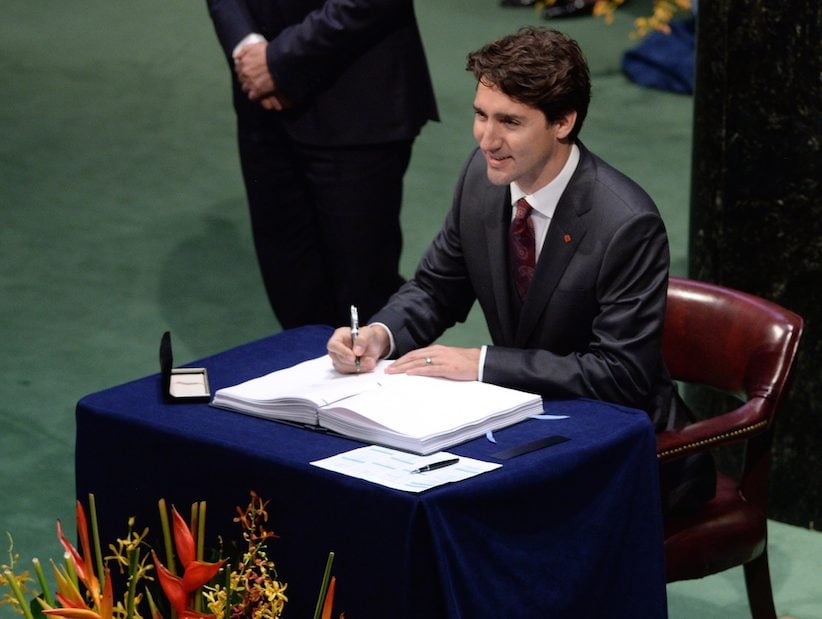 Highlights from the news file for Friday, April 21:

Prime Minister Justin Trudeau joined world leaders to help formally ratify a global treaty on climate change. Putting his signature to the Paris accord was the easy part. The hard part comes next: reducing Canada’s greenhouse-gas emissions by 30 per cent over the coming decades. Canada is nowhere near that target. The prime minister promised he’d remain committed to it. “Today, with my signature, I give you our word that Canada’s efforts will not cease,” Trudeau told the UN’s General Assembly hall. Read more here.

Taxpayers forked out almost $150,000 for Prime Minister Justin Trudeau and his 30 cabinet ministers to hole up for several days at a swanky, seaside New Brunswick resort where they pondered weighty matters of state. And now they’re poised to do it again, this time at a mountain resort in Kananaskis Country, 85 km west of Calgary. Officials argue the retreat is an important exercise in regional outreach and bonding for Trudeau’s still relatively new ministers. Read more here.

There were no apologies from Conservatives on Friday following a scathing court judgment that exonerated Sen. Mike Duffy of 31 expense-related criminal charges while indicting his former political masters in the Prime Minister’s Office of Stephen Harper. Only Conservative MP Candice Bergen was willing to speak with reporters, offering up a stout defence of Harper’s leadership while avoiding the specifics of the Duffy verdict. Read more here.

More than 500 doctors billed Ontario’s health insurance plan over $1 million each last year, with one ophthalmologist charging what the province’s health minister called “a staggering” $6.6 million.Of the top five billers, two are ophthalmologists, two are radiologists and one is an anaesthesiologist, but their names and where they work are not being released.

Fresh economic data showed sturdier-than-expected retail sales and underlying inflation, providing further evidence the economy has started to show some life. A new Statistics Canada report found that inflation remained cool last month at 1.3 per cent as cheaper energy prices — compared to a year ago — continued to weigh down the annual rate.

A police officer who advocates for the legalization of drugs while off duty has been awarded $20,000 in a human rights case that pitted the officer against his employer, the Victoria Police Department. The B.C. Human Rights Tribunal sided with Const. David Bratzer, saying his employer interfered with his rights as a citizen to freely express his views and ordered the award for injury to dignity, feelings and self-respect.

Police are accusing an 18-year-old man of plotting murder after officers found a bag of guns this month near a Halifax-area high school. Jonathan Murray of Halifax was charged Friday with conspiracy to commit murder. He was originally charged with uttering threats, but police say they continued to investigate what happened near Millwood High School in Middle Sackville. “Based on the investigation, police allege Murray had access to firearms and was planning to commit a violent act at the school,” RCMP said in a statement.

A defence lawyer has asked a judge to sentence a pedophile to time served after the man pleaded guilty to charges involving making child pornography. Mark Thompson has told B.C. Supreme Court that Christopher Neil should receive a lesser sentence after admitted to five offences that occurred in Southeast Asia and British Columbia.

President Barack Obama plunged into a whirlwind of royal socializing Friday that began over a birthday lunch with the Queen and ended at a dinner hosted by the trio of young royals who represent the future of the British monarchy.Obama, accompanied by his wife, Michelle, arrived by helicopter on the verdant grounds of Windsor Castle, the sprawling, centuries-old royal residence and tourist lure located just west of London where the Queen celebrated her 90th birthday a day earlier. Read more here.

Eight people were found dead Friday at four crime scenes in rural Ohio, and at least most of them were shot to death, authorities said. Seven of the victims, including two children, were slain in “execution-style killings” at three homes along a rural road, authorities said.