The Games get more political 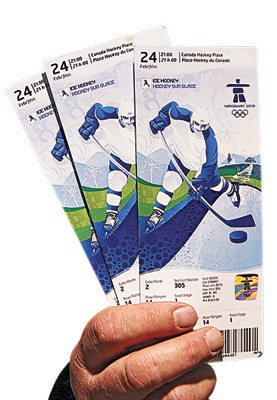 During the Vancouver Olympics, Canadians basked in the collective glory of patriotism; even party politics gave way to communal revelry. But now questions have emerged about whether government officials, many of whom enjoyed free tickets or priority access to Olympic tickets, deserved VIP status at the party.

In Ottawa, Conservative senators and MPs bought 211 tickets (including 76 for hockey—and four for the men’s gold medal final) from the block reserved by Canadian Heritage, while opposition representatives steered clear of the benefit, arguing that politicians shouldn’t get to jump the line. The Tories have since accused the Liberals, who were in power when the multi-party agreement regarding tickets to the Vancouver Games was struck, of being hypocritical for not purchasing from the block. Joyce Murray, Liberal critic for the Olympics, dismissed the charge as “petty politics.”

Meanwhile, in Vancouver, a report indicates that the city spent $36,155 on tickets for city councillors and park board trustees—over $10,000 more than it spent on seats for local athletes and Olympians. Ellen Woodsworth, one of three city councillors who declined free tickets, has ripped the program as a waste of resources. But Nelson Wiseman, a Canadian politics expert at the University of Toronto, says “it’s not wholly unreasonable” for local politicians to receive free tickets because they are heavily invested in the event. And he doesn’t have a problem with MPs getting priority access either. “They are VIPs,” he says. “As long as they paid for their tickets, it’s kosher.”

An Olympic presence has long been important to government—whether or not Canada plays host. Sheila Copps, the heritage minister under Jean Chrétien, says that at the time, the Liberals offered free Olympic tickets to a delegation that included the minister of state for sport, opposition critics and parliamentary assistants. “What better way to build support for sport investment,” she says, “than to have parliamentarians see how the investment is spent?”