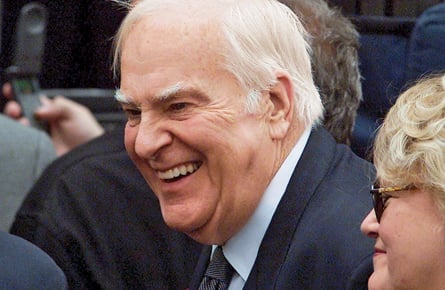 If Canada’s natural governing party in its heyday had a godfather, it was Keith Davey, the former Toronto advertising executive who died this week at 84, after an extended battle with Alzheimer’s.

The ultimate backroom functionary whose strategic advice and organizational skills fuelled the reigns of two prime ministers—Lester Pearson and Pierre Trudeau—Davey virtually invented the modern Liberal party. He pioneered the creative applications of polling and the uses of electronic techniques to reinforce his intuitive wisdom that perception had become reality—a shift that signalled a fundamental reworking of the rules of engagement.

A big, hunched Eagle Scout in politics, Davey was the most widely liked presence in the cold capital city of Ottawa and bounced his enthusiasms off its icicled back. As the long-time national director of the Liberal party, he supplied the Rotarian energy that kept the political machine functioning at its best, under Trudeau, and its most useful, under Pearson. Pearson’s legislative achievements were unparallelled, but his hesitant electoral approach barely managed to eke out two slim minorities from the barely coherent John Diefenbaker.

In the spring of 1961, Walter Gordon, the Toronto accountant who was then Mike Pearson’s campaign manager, hired Davey, following the Kingston Conference that had replenished the Grits’ bare policy cupboard and recruited a dozen star candidates. Davey set about rebuilding the rusty party machine across the country, cog by cog, instilling its indolent ethic with rah-rah enthusiasm and something resembling the New Frontier spirit of John Kennedy, whom he so admired. (Davey recruited Lou Harris, the American president’s private pollster, after the 1962 election, though he was carried on the Liberal payroll under an assumed name.) The genius of the Davey/Pearson approach was to open the party up to new ideas and dedicated outsiders.

Watching the Liberals in action for half a century, I concluded that their operational code was to govern Canada by striking the most marketable balance between elitism and egalitarianism—staying a smidgeon left of centre by doing as little as possible, but as much as necessary. Under Davey, Ottawa became a company town and the Grits owned the franchise. They acted as if they alone knew what was good for Canadians, and that it was plain dumb to vote for any other party, except as occasional comic relief.

Several times a month when I was reporting on Ottawa, Keith and I would lunch at the Granada Café, a greasy spoon around the corner from the Liberal party’s headquarters on Cooper Street, sharing soggy sandwiches while he would give me the inside dope on what was going on. He carried a button pinned inside his wallet that warned him, “stifle yourself!”—but he seldom did. Unlike most politicos, Keith never allowed his family life to suffer from the stresses of his position. His second marriage to Dorothy Petrie was a daily love story, disrupted only by his last illness.

Ironically, Keith Davey’s ultimate legacy turned out to be Michael Ignatieff’s leadership of the Liberal party. His son Ian, who later became Iggy’s chief of staff, was unhappy with the crop of candidates eager to succeed Paul Martin. When he mentioned this to Rocco Rossi, then a successful Toronto management consultant, and asked for advice, Ian was told, “Look, I only have one idea and it came from your dad. When I went to the Keith Davey lecture at Victoria College in the second year the series was held, Michael Ignatieff was the guest speaker. Your dad walked up beside me as we were leaving and said, ‘That guy should be prime minister.’ ”

“I’m not the brightest guy in the world,” says Ian, “but I liked [Ignatieff] too, so when I got back to the office, I dialled Alf Apps’s number, because as one of the party’s leading lights he had also been searching for alternatives.

“As only Alfred would do, he picks up the phone and calls him, gets through, we arrange to meet, and the rest is history.”