The government must bring refugees to Canada. And so must we.

Privately sponsored? Government-assisted? It doesn't really matter how refugees get to Canada. It just matters that more of them do. 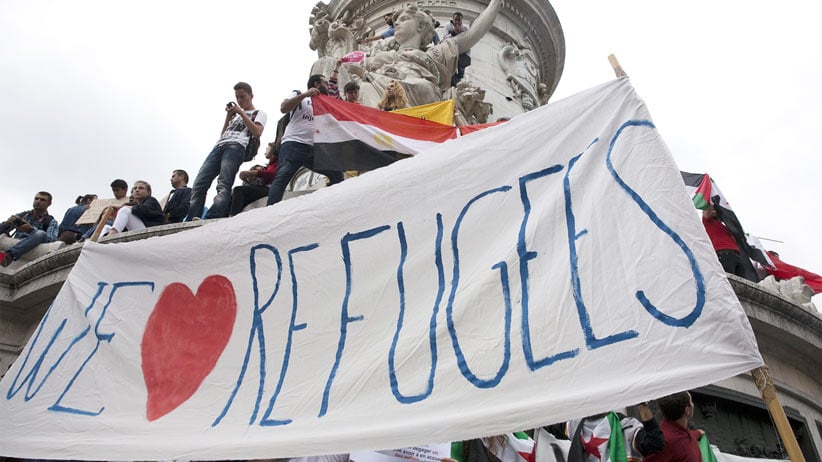 People hold a banner that says “We love refugees” as they take part in a demonstration asking for a change in the refugee policy in Europe on the Republique square in Paris, France, September 5, 2015. (Philippe Wojazer/Reuters)

Everyone can do more to resolve the Syrian refugee crisis. As we grapple with the greatest mass-migration catastrophe since the end of the Second World War, all nations with the means to help have a clear obligation to do whatever they can. And, as one of the luckiest and most privileged countries in the world, Canada should be front and centre in this effort.

Since 2011, an estimated four million Syrians—more than half the country—have been displaced from their country due to a bloody civil war, plus invasion by Islamic State. Another three million people have been uprooted from Iraq for similar reasons. This flood of humanity has forced its way into transit nations such as Turkey, Greece and Hungary; and now, all of Europe is under pressure. A permanent solution will require massive amounts of humanitarian aid, resettlement offers for the most vulnerable, and continued military/political efforts to stabilize the region.

Some European countries, notably Germany and Sweden, have responded promptly and generously to the immediate refugee crisis. Germany has already accepted more than 35,000 refugees this year, and is ready for much more. The country’s vice-chancellor said his country could take up to half a million annually for the next several years. France and Britain have also dramatically upped their pledges. Yet many more countries continue to avoid commitments due to anti-immigrant sentiments and/or a lack of political will. Gulf states Qatar, the United Arab Emirates, Saudi Arabia, Kuwait and Bahrain have all kept their doors closed. The same goes for Japan, Singapore, South Korea and Russia. And while the United States has accepted a small number of Syrians—and is leading the air campaign against Islamic State—it’s so distracted by its presidential race that the crisis is almost completely absent from American discourse. So what should Canada do?

Related: With this plan and political will, Canada can bring in 200,000 refugees in the next 12 months

Nativist opposition to refugees is, thankfully, rare in Canada. As a nation of immigrants, and given our (mostly) proud record of welcoming the dispossessed in times of conflict, the Canadian public has clearly been awakened by the scale of the European crisis—and, in particular, by the powerful image of three-year-old Alan Kurdi dead at the water’s edge in Turkey.

Obviously, we can accommodate more than what Prime Minister Stephen Harper has pledged to accept over the next four years (10,000 Syrian refugees in a January 2015 pledge; an additional 10,000 Syrian and Iraqi refugees promised on the campaign trail). NDP Leader Thomas Mulcair wants to resettle 46,000 Syrian refugees over five years. Liberal Leader Justin Trudeau vows to immediately bring in 25,000. In Maclean’s this week, Scott Gilmore provocatively calls on Canada to take 200,000 refugees—perhaps the upper bound of our capabilities, although Gilmore makes a compelling case for boldness.

More significant than any single number, however, is the degree of public participation in this country’s response. Much has been made of the fact that the Harper government relies heavily on private sponsorship of refugees, rather than direct government assistance. Of the more than 2,300 Syrian refugees resettled here to date, political opponents say it’s embarrassing that only one-quarter are supported by government programs, with the rest financially assisted for the requisite one year by charities, churches, family members or other groups of concerned individuals. 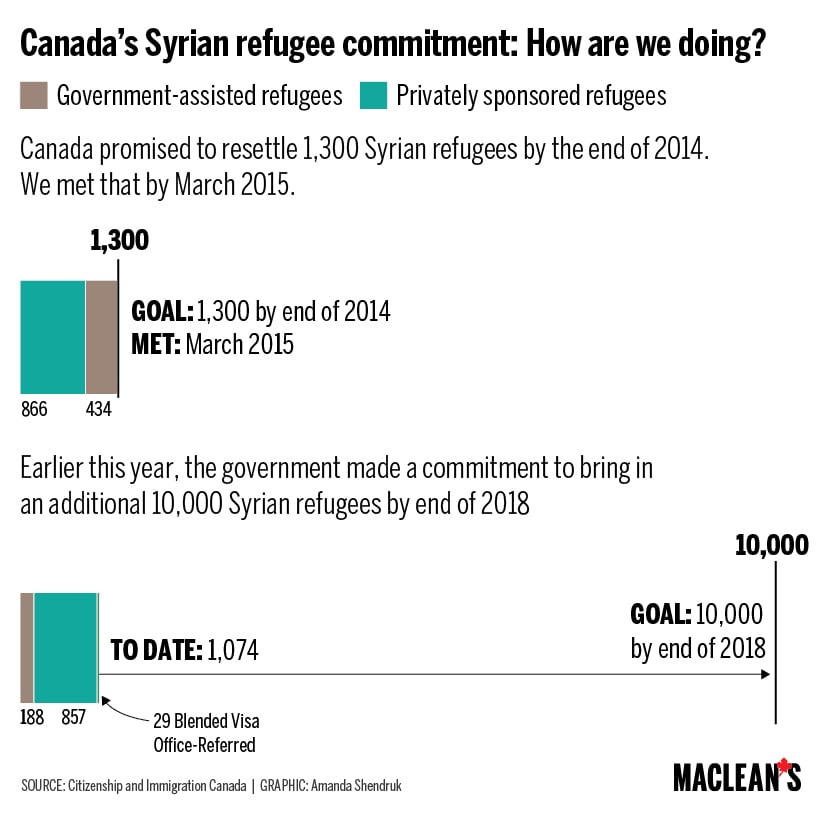 Rather than complain about an apparent imbalance between government and private effort, we ought to be encouraging more of both. There is no particular benefit from government sponsorship. In fact, privately sponsored refugees are quicker to become self-supporting and more likely to find employment in their own areas of expertise. This is likely because they benefit from the contacts, local knowledge and personal attention of their sponsors, who have a real stake in their refugees’ successful integration into society.

Canadians have been frequently reminded of the parallels between the current Syrian crisis and the 1979-80 armada of boat people from Vietnam, when Canada welcomed more than 60,000 refugees. Recall that the private-sponsorship program rose to prominence in direct response to the Vietnam crisis; nearly 60 per cent of the boat people who arrived in Canada were privately sponsored.

There’s no question Canada has the ability to welcome many more refugees from Syria than have been pledged to date. But, as was the case in 1979-80, we should encourage not just government, but Canadians themselves to propel such an initiative forward.

So let’s propose Ottawa commit to matching private refugee sponsorships on a one-for-one basis. If private sponsorship alone can fulfill Canada’s remaining commitment of Syrian refugees, the government ought to double that through its own programs. Previous offers to match private donations in response to the devastating Indian Ocean tsunami in 2004, the 2013 typhoon in the Philippines, and this year’s earthquake in Nepal, provide ample precedent for such a move. Ottawa can also do more to streamline, promote and facilitate private sponsorships. And if Canadians thus decide they wish to sponsor 100,000 refugees, a matching pledge from Ottawa would allow 200,000 vulnerable and desperate refugees a fresh start and a new life in this country. It’s not impossible. It’s a Canadian tradition.