The Halifax explosion: How newspapers covered the tragedy in 1917

In the aftermath of a disaster that killed thousands and injured thousands more, newspapers from Toronto to Hawaii and France to Australia scrambled to update readers 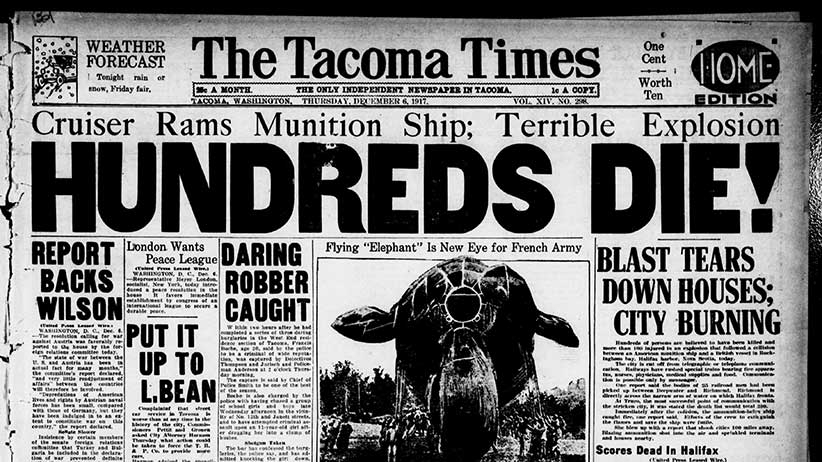 Katie Ingram is a freelance journalist based in Halifax. She is also the author of Breaking Disaster: Newspaper Stories of the Halifax Explosion from Pottersfield Press.

On Dec. 6, 1917 the Imo, a Belgian Relief ship, collided with the French ship, the Mont Blanc. Shortly after 9:00 a.m., the Mont Blanc, which was carrying a large cargo of explosives, blew up. It destroyed much of the city’s north end and damaged neighbouring communities like Tuft’s Cove and Dartmouth. The effect was catastrophic.

Almost immediately, aid was rushed to Halifax as survivors and workers dug through rubble and ruins for friends and family. Over 2,000 people died and 9,000 were injured, while countless others were rendered homeless. As news broke about the explosion, newspapers from Toronto to Hawaii and France to Australia scrambled to provide readers with updated information.

Here are a few of the ways the newspapers of the world told the story of that day and its aftermath. 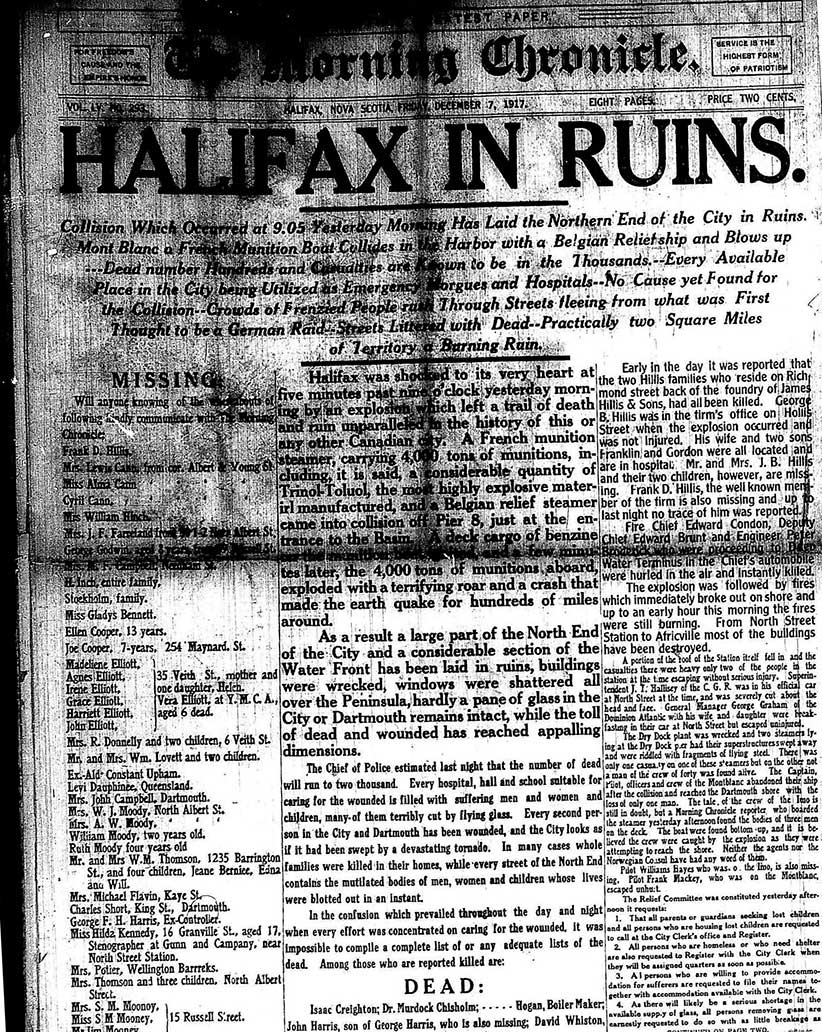 Following Dec. 6, Halifax’s five local papers seemed to focus less on what had happened during the explosion and more how people were faring—although the cause of the blast was still important. One of these papers, The Morning Chronicle, led its first day of coverage with the headline “Halifax in Ruins.” One article described the explosion as an event that  “left a trail of death and ruin unparalleled in this or any Canadian city.” Most buildings, from North Street to Africville, were said to be destroyed, while the initial toll of dead or injured had already reached “appalling dimensions.”

Among the missing were Mrs. A.W Moody and two of her children, Ruth and William—all of who would never be found. Among the listed dead was Dr. Murdoch Chisolm, who only a day later would be reported alive. Chisolm would read about his own death at the Victoria General Hospital as he recovered from his wounds. 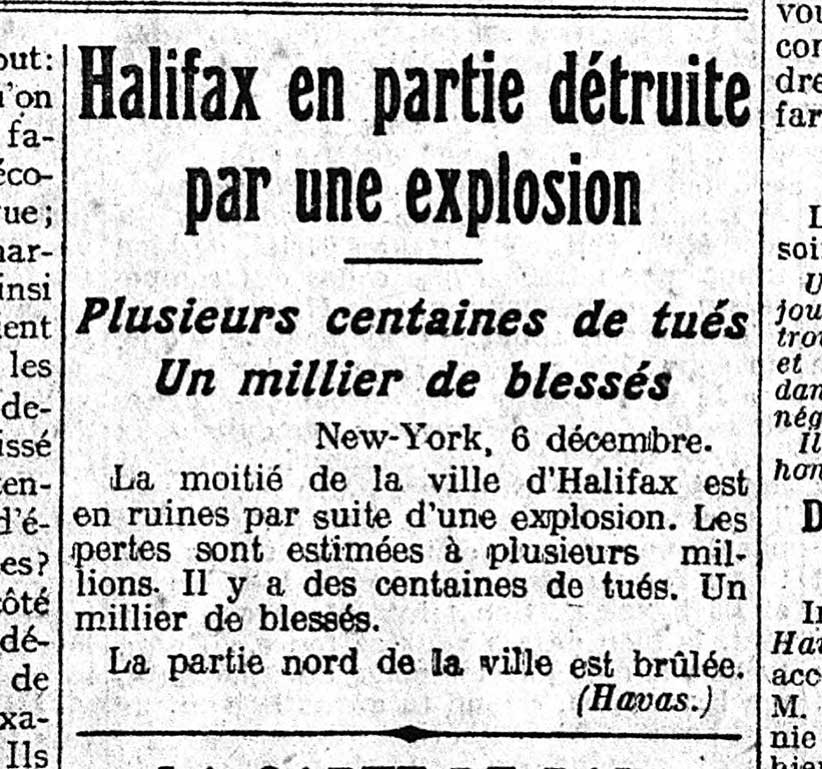 Many papers outside of Canada reprinted wire reports from organizations like The Associated Press, The Canadian Press and Reuters. Even with the invention of the telegraph and the installation of the Transatlantic Cable in 1866, news was still a bit slow. In France, L’Écho de Paris printed a day-old report about the explosion on Dec. 7. Although brief, it gave readers some of the key details about the event as they were known. Financial losses were said to be in the millions, hundreds were dead, about a thousand were injured and the northern part of the city was “burned.” 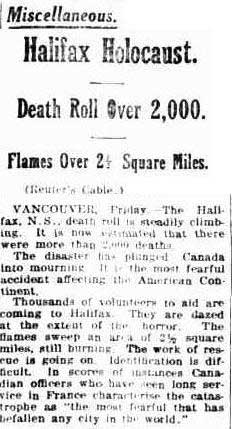 Like L’Écho de Paris, The Northern Times in Australia used brief wire reports to keep readers updated. Many of these reports didn’t come from Halifax, but other places in Canada. On Dec. 8, the Times used a Dec. 7 report from Vancouver. The piece, titled “Halifax Holocaust,” told readers 2,000 deaths were caused by a 2.5-square-mile  blast. The disaster had “plunged Canada into mourning,” the article stated, while noting that soldiers who had served in France had never seen anything like it.

However, help was on its way, as aid workers were said to be flocking to the city. Identification of the dead had already began, despite being a difficult task in some cases. 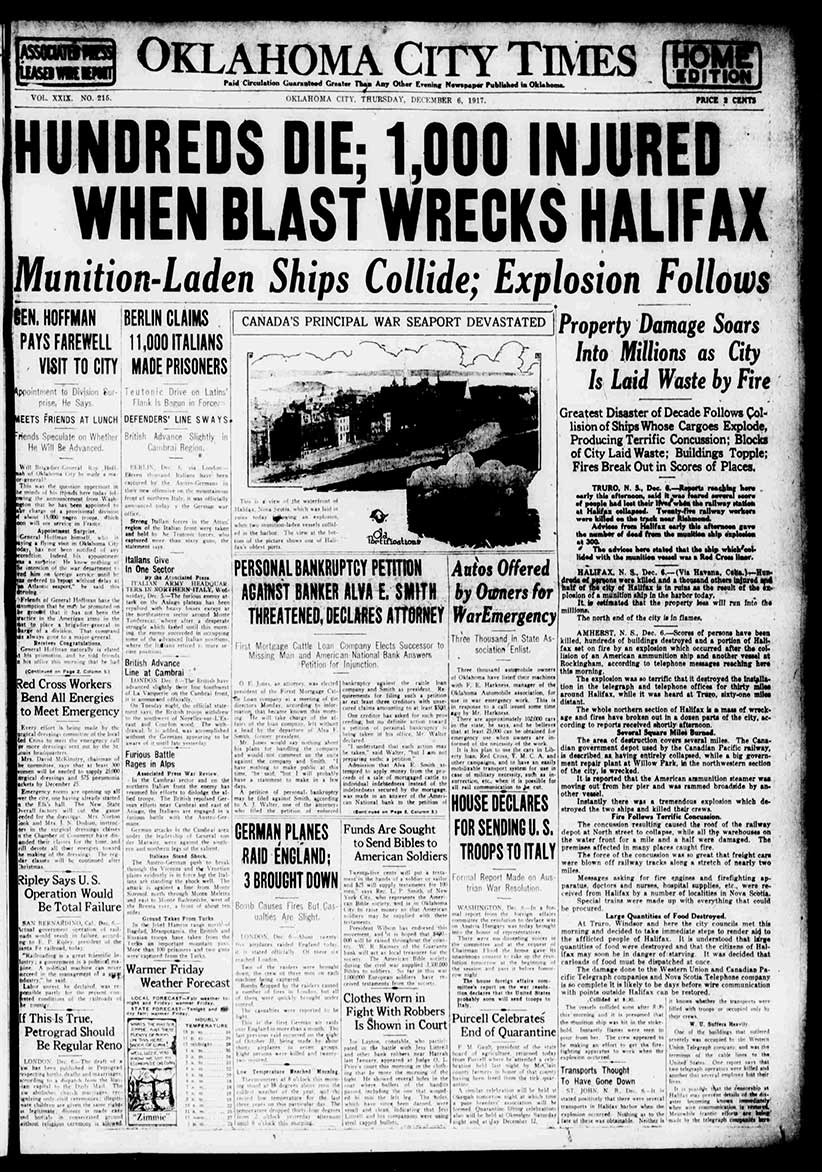 War was a common theme on the Oklahoma City Times front page on Dec 6. This included articles about troops sent to Italy and a report from Berlin that claimed 11,000 Italians had been taken prisoner. However, the focal point of the day’s coverage was that Canada’s “principal war seaport [was] devastated.”

Like a lot of papers in these early hours and days, the City Times stated that the explosion was caused by an American ship and another, unnamed vessel near Rockingham. Neither of the ships involved were American, nor was the collision at Rockingham. Rockingham is near Bedford, which is close to where the collision occurred, but the location is still incorrect. The disaster did destroy a community that started with a letter R though: Richmond. 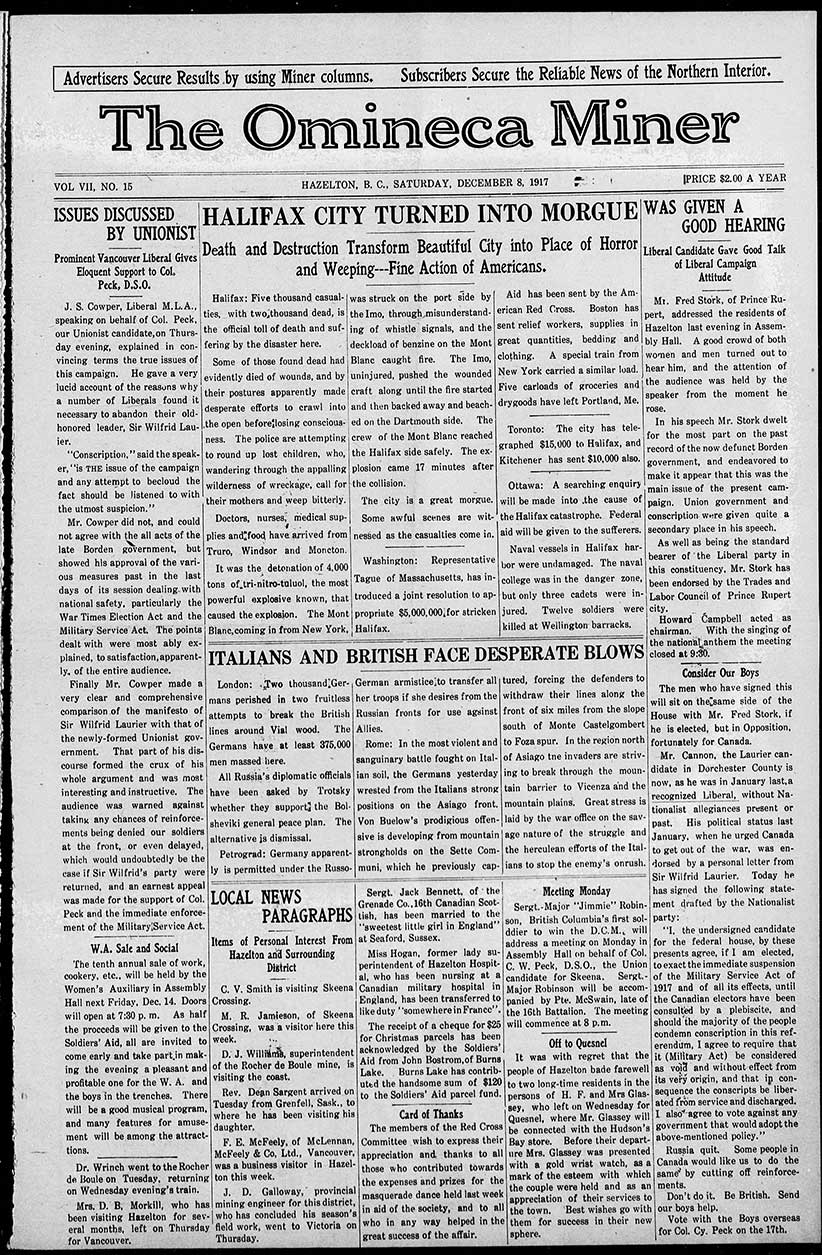 As relief started to flood into Halifax, more and more papers turned their attention to these efforts. On Dec. 8 The Omenica Miner from British Columbia reported that a group from Massachusetts was sending US$5 million, Toronto had sent $15,000 and Kitchener sent $10,000, while other communities, like Boston, Truro, Moncton, Windsor and New York had or would be sending aid workers or supplies.

For Omenica readers, the day’s newspaper brought more than just a slew of facts and numbers. The paper covered, in detail, the horrors of the disaster. One story described how the dead were found in twisted positions, as if they had attempted to crawl to safety before succumbing to their injuries. Referring to the city as a “great morgue” it reported that children were wandering among the wreckage, calling out for their mothers, not knowing what to do or who to turn to. Police were trying to round up the children to the best of their ability.

Death notice from the Morning Chronicle and Daily Echo, Dec. 11: 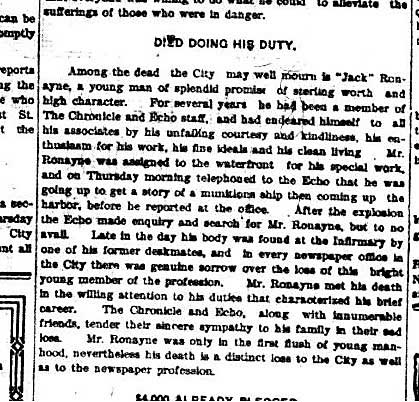 Despite Halifax being home to five papers in 1917, only one journalist died. Jack Ronayne was a 23-year-old reporter for the Morning Chronicle and its sister paper, the Daily Echo. While on assignment, Ronayne called into the office to say he was staying at the waterfront because something was happening with a munitions ship. He was never heard from again and his body was later identified by his mother and a desk mate.

His abilities as a journalist were praised on Dec. 11 when he was described by his employers as “someone with unfailing courtesy and kindness,” who was a “distinct loss to the city as well as the newspaper profession.” 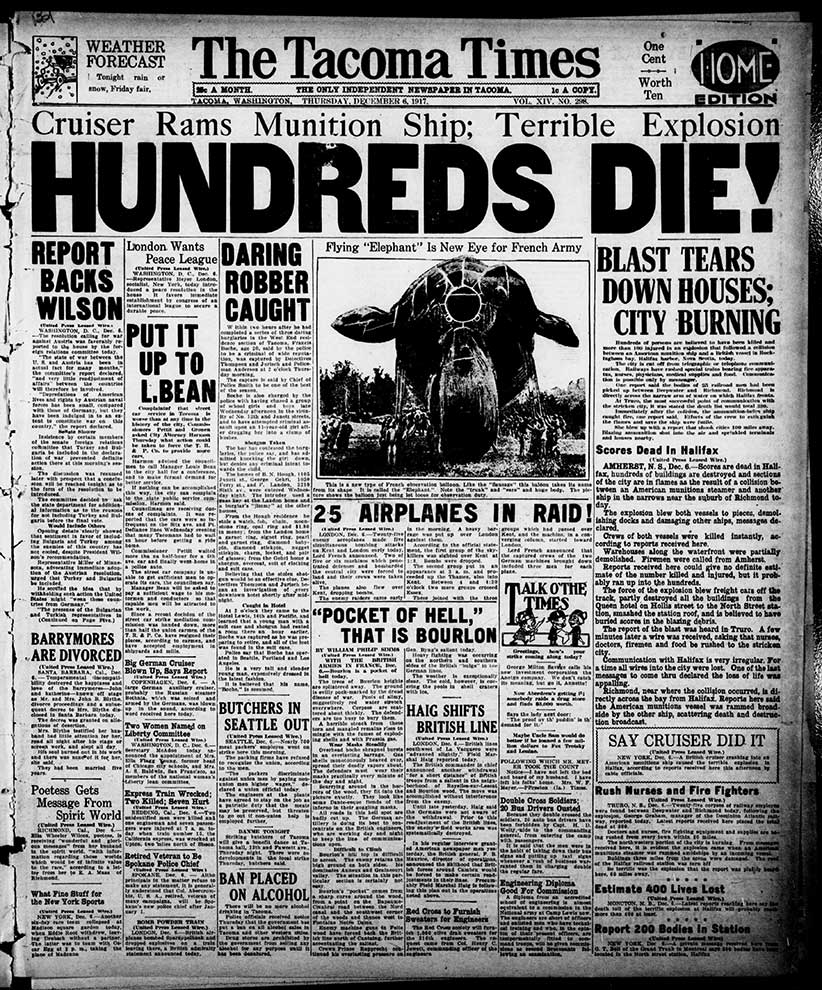 “Hundreds Die!” Complete with exclamation mark, that was the headline that greeted Tacoma Times readers on Dec. 6. It was clear to those in the Washington community that something disastrous had happened somewhere.

Upon further reading, they would be incorrectly told a British cruiser crashed into an American munitions ship in Halifax, leaving a wake of destruction from the Queen Hotel on Hollis Street to the North Street railway station. Even though communication was only available via messenger, 25 bodies were said to have been found between the Richmond and the Deepwater. Another 200 were said to be found inside the station, which suffered a roof collapse. In total, it was expected that as of publication between 300 and 400 people were dead. 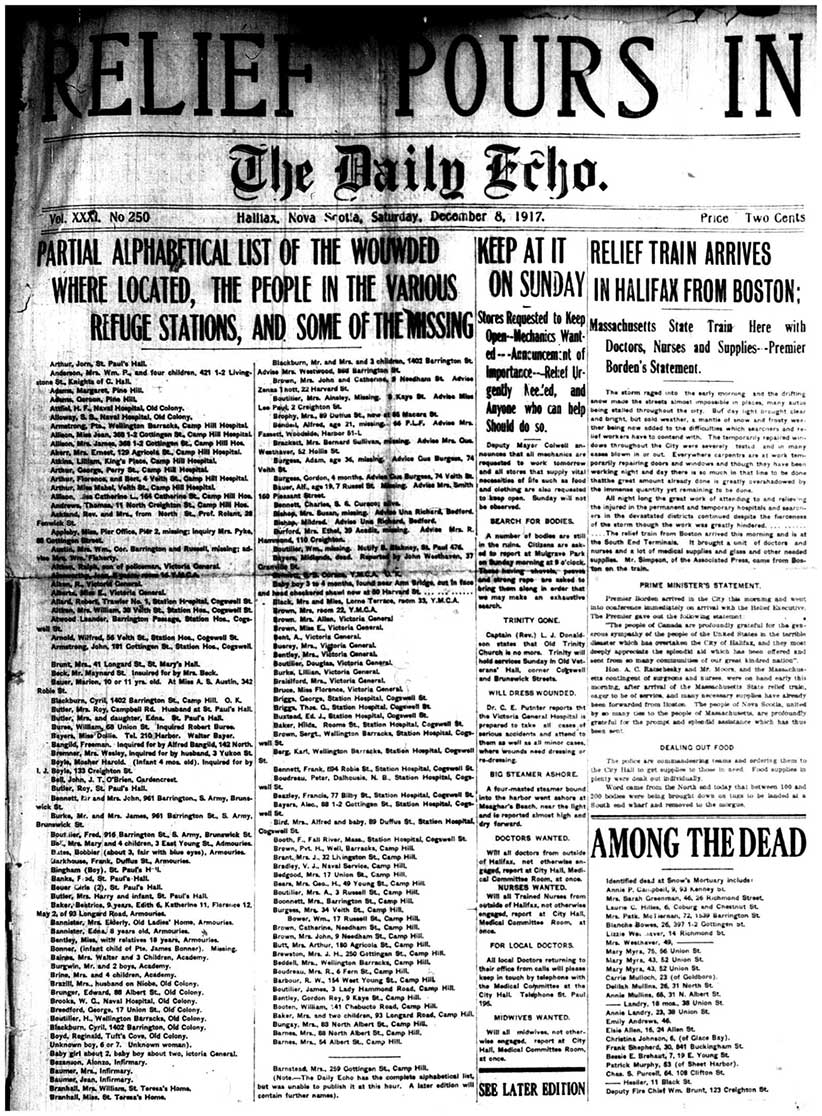 Locally, the lists grew and grew, as did the places where the injured and dead were taken. Among the reported injured on Dec. 8 were a Mrs. Alfred Bird and Baby who were at the Station Hospital on Cogswell, eight-year-old Edna Bannister at the Armouries and Roy Gordon Bentley at Camp Hill. Among the dead at Snow’s Mortuary were Mary Myra, mother of Doris Myra who tried to save her mother by dragging her out of a burning house; 14-year-old Lizzie Westhaver of Russell Street and six-year-old Christina Johnson.

But there was more to these local reports than just lists.

People were also told where to go for help and what kind of help was needed. Doctors, midwives and nurses were told to report to specific locations, while the Victoria General Hospital was finally able to dress or redress the wounded, two days after the blast. It was also stated that the tradition of closing businesses on Sunday was not be observed. Deputy Mayor Colwell urged supply stores and mechanics to remain open and everyone to help where they could. 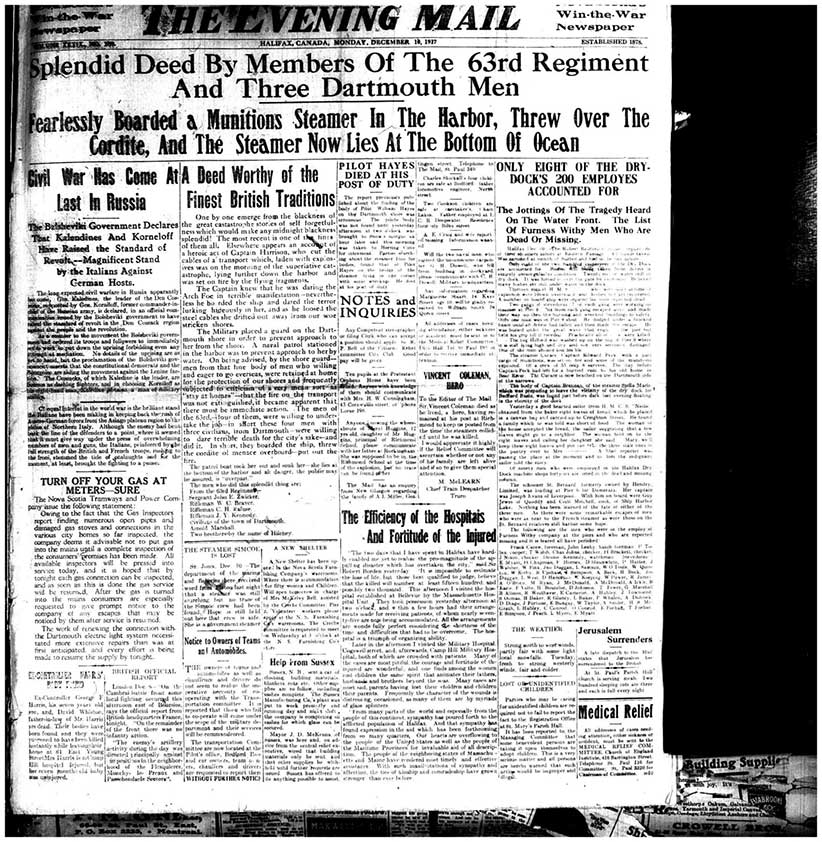 By Dec. 10, lists of the dead, injured and missing had been replaced with more details and facts for Evening Mail readers. The later-day counterpart of the Halifax Herald, this day’s issue of the Mail contained a small article about train dispatcher Vince Coleman, whose instructions to a passenger train to stop outside the city is know to many people today because of a Heritage Minute segment. A colleague was requesting extra help for his family; the colleague asked that they receive “special attention” for Coleman’s heroic actions. The paper also described other acts of heroism, including one from Captain James Harrison who managed to get another munitions-laden ship, the SS Picton to safety after it’s crew was killed.

Despite it being days after the blast, people were looking for family members, like the missing A.E Craig and 10-year-old Marguerite Stewart. It was also noted that the Nova Scotia Furnishing Company had made space for 50 women and children seeking shelter in one of its storage areas.

The Mail had also returned to covering other types of news. It mentioned that Jerusalem had surrendered to the British and that Russia was facing a civil war, while light snow and strong winds were expected Tuesday in Halifax. 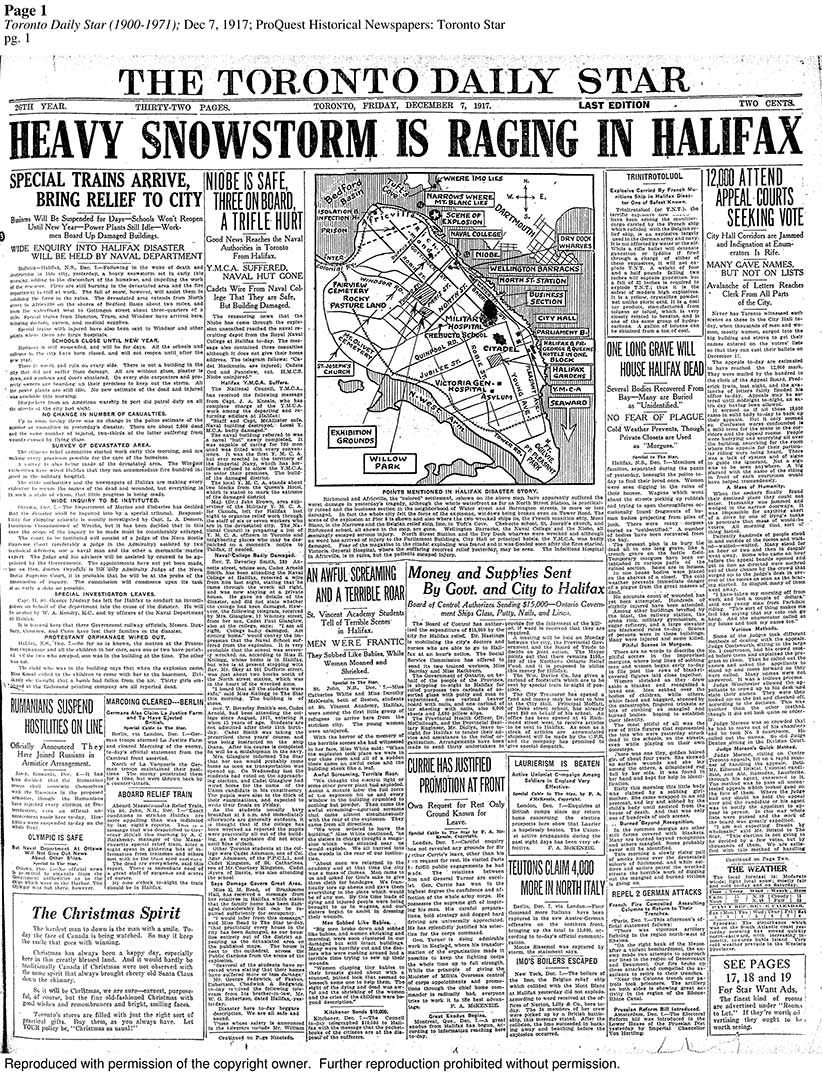 Although a snowstorm was the headline of choice for the Toronto Daily Star on Dec. 7, the map below it was a more prevalent feature. The paper tried to pinpoint exactly where the explosion had taken place. Africville, a former African-Nova Scotian community which wasn’t covered by the media as extensively as Halifax, is noted on the map and said to be one of the worst damaged areas, along with Richmond. Other key places noted by the map were the Wellington Barracks, Richmond School, the dry dock and North Street Station. All of which were destroyed or damaged. However the blast is incorrectly sated to have happened around Pier 8. It happened near Pier 6.

The scope of death is also very clear in reports given by the Star. In one case, the paper reported that closet shelves were being used to store bodies, as there was no room elsewhere. Wagons that were trying to pick up rubbish and keep the streets clean would occasionally find pieces of bodies “projecting from piles of junk,” while the mood at the morgues was described as “pitiful.” Men were openly sobbing, while women shrieked. Objects from many of the bodies were laid out, hoping it would help with identification. This included a “dilapidated” doll belonging to a four-year-old child who didn’t have a scratch on her, but had died in the blast. The child was identified by her mother on Dec. 7. 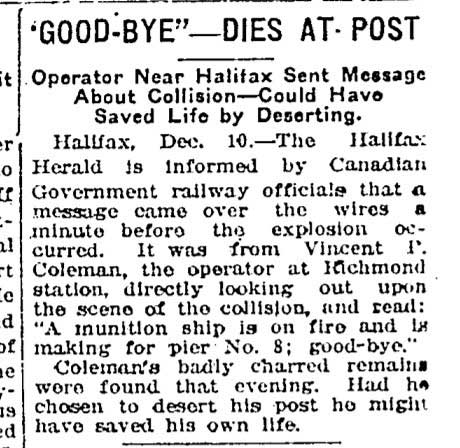 In those early days and hours, train dispatcher Vince Coleman was one of the many dead, a name on a list filled with many other names. However, as the days went on, Coleman and his Morse Code message became news. The Toronto Daily Star, on Dec. 10, said The Halifax Herald was told Coleman’s message was “a munition ship is on fire and is making for Pier No. 8; good bye.” It was thought he could have survived the blast if he had left his post.

On Dec. 12, the Edmonton Bulletin, then called the Morning Bulletin, said that the main task of the day was clearing the streets of glass and debris. During these recovery and cleaning efforts, a man was found who had been unconscious for six days, in the North Street rail station. When they removed the beams trapping the man, he seemed dazed and asked what had happened.

Others weren’t so lucky. It was noted that Robert Donnelly (incorrectly spelled as Donley), a seaman on the Niobe came home to find his wife and children blown to pieces. Determined to give a proper burial, he put the remains in a single box and buried them “near the spot where the dead from The Titanic lie.”

Looting was also becoming an issue, so military authorities had started mounted patrol of the former Richmond area. Among previously reported crimes was stolen liquor, $100 being taken from an unconscious woman and the Isleville engine house being broken into.

SEE: Photos of the devastation left by the Halifax explosion