The hard math of Alberta’s election 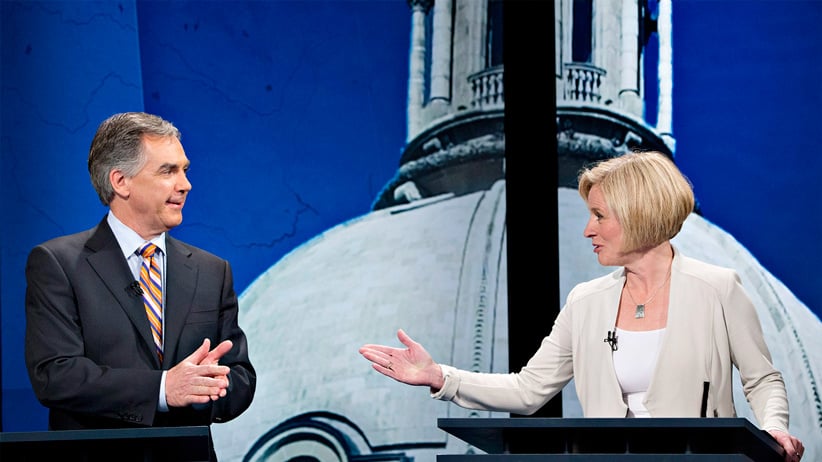 Listen to Colby Cosh read this column, or subscribe to Maclean’s Voices on iTunes or Stitcher for on-the-go listening. Check out our slate of weekly podcasts, too:

With about a week left in campaigning, here’s what we know, or think we know, about the Alberta election scheduled for May 5.

Nobody trusts the polls. They are mostly being conducted by unfamiliar firms with no record of Alberta tea-leaf reading. But the signal that the New Democratic Party is close to a sweep in Edmonton is so strong that it cannot be ignored. Three different firms who polled the city on or about April 23 have the NDP at 56 per cent, 61 per cent and 54 per cent among decided voters.

There are many undecideds, and they may scooch toward the PCs. But . . . 54 per cent? 61 per cent? That is a lot of mileage to make up, even if the polls are badly out of whack. NDP Leader Rachel Notley was widely seen—right across the partisan spectrum—to have won the April 23 TV debate. Thomas Lukaszuk’s northwest Edmonton PC seat ought to be one of the safest in the city. When he endorsed the NDP’s corporate tax hike on April 21, contradicting his own party’s platform, it was a hint that internal Tory polls must look almost as bad as the published ones.

The province-wide NDP numbers, whichever set you prefer, are conceptually hard to translate into large numbers of seats outside Edmonton. Former Calgary alderman Joe Ceci, running for the NDP, is thought to be strong in his old stomping ground of Calgary-Fort, as is Shannon Phillips in university-influenced Lethbridge West. There is bound to be a third name on this list—a name no one knows yet. Some shrewd, hard-working NDP candidate is knocking on the last door in his riding right now, scarcely suspecting he is about to beat some country-fried PC cabinet minister who got careless.

Alberta New Democrats’ dreams are much wilder than this. They envision a chaotic “wave” election: a butterfly farts in Banff and they unexpectedly quadruple or quintuple their support, as they would need to, in seats outside Edmonton. But unless things have changed very dramatically in places like Cold Lake or Drumheller, the New Democrat ceiling is a couple of dozen seats. That would leave the overall outcome to be decided by 60-plus PC-Wildrose fights in Calgary and the hinterland.

Notley will be the emerging star of the campaign even if she takes third place. During the TV debate she benefited from a tart exchange in which Premier Jim Prentice, trying to emphasize that Notley would raise provincial corporate tax rates by 20 per cent, quipped: “I know math is difficult.” He was trying to crack wise about the NDP making accounting mistakes in the original release of its budget plan. But the joke came off as “mansplaining,” which, for future readers, was a borderline capital crime in 2015.

Notley was also ready with a counter to Prentice’s actual debating point, insisting that the NDP’s fast correction of its error was an example of transparency and accountability. She also got off the best joke of the night: after Prentice mixed it up a little with Wildrose Leader Brian Jean, she told the premier: “That’s not the way to talk to a donor!” This was a cheeky reminder that Jean’s Fort McMurray-based company had donated $10,000 to Prentice’s 2014 leadership campaign.

They don’t give elections to the person who cracked the best joke. Brian Jean bored viewers by repeating over and over again that he was the only leader on the stage whose party would not raise taxes. If he could have me type that twice, he would. His one-note campaign is not going to spark Brian Jean-mania.

Which hardly matters. Jean has anathematized the Wildrose floor-crossers of late 2014—arguably to the point of absurdity, with his proposal to make MLAs put up forfeitable bonds preventing party treason. That history, though very recent, has hardly come up in the campaign. If it is present as an issue, Prentice’s PCs may be more exposed to the lingering odium than Jean’s Wildrose.

The Conservatives are treating Notley as the main adversary, ramping up attacks on past NDP governments outside Alberta and torpedoing the NDP’s fiscal plan. (How many Albertans are refugees from NDP Saskatchewan or descendants thereof? Half a million? A million?) The Tories need centrist PC voters, the ones who elected Alison Redford in 2012, to stay put. A few PC-to-NDP switchers outside the Calgary-Edmonton corridor will elect a whole lot of Wildrosers. Even poor PC morale would do the trick. And the near-certainty of a large New Democrat bloc in the Assembly creates the chance of Alberta’s first-ever minority government.