Adam Trigg on the canoe trip of a lifetime

From 2015: Six friends paddle from the Gulf of Mexico to the Arctic Ocean—just for the adventure of it all 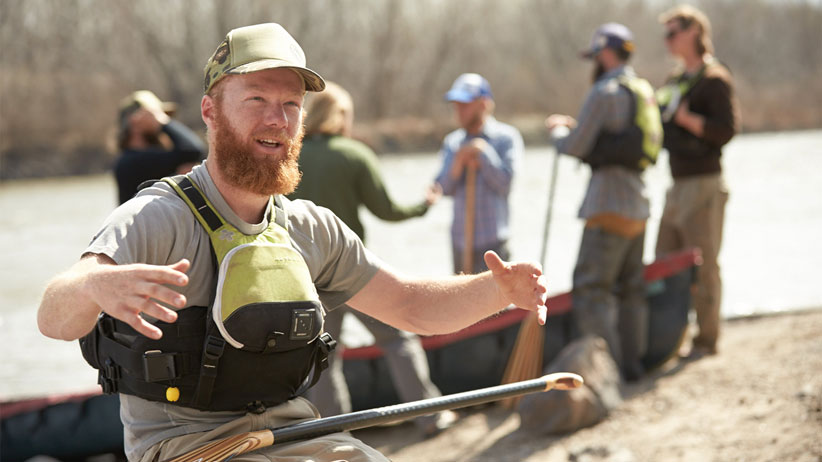 Adam Trigg is known as the “Renaissance Man.” With five of his friends—Winchell Delano, Jarrad Moore, Daniel Flynn, John Keaveny and Luke Kimmes—he’s on the canoe trip of a lifetime. In three separate canoes, the men started on Jan. 2 [2015] in the Gulf of Mexico and are currently en route northbound—taking the Mississippi River, Red River, Lake Winnipeg and Lake Athabasca—until they make it to their final destination: the Arctic Ocean. On the 8,000-km-plus expedition, their longest portage will be about 20 km. Maclean’s reached Trigg, 29, on a brief layover in New Ulm, Minn., which several of the journeymen call home, 98 days into their trip.

Q: Why are you guys on this trip?

A: Honestly, it’s just the adventure. We knew we wanted to do something big. We planned on just going through Canada from the northern border of Minnesota up to the Arctic Ocean, but we wanted to make it different, and that was to start in the Gulf. We get a lot of people asking: Why not [do it for] a cause? Our answer is: What’s wrong with an adventure? Why does it need to have this other bigger purpose besides what it is? We wanted to see if we could do it.

Q: How long did this take to plan?

A: We started with about a year and a half of time. I pretty much stopped working in Utah about four months before we left to come home and really just devote as much [time] as I could to getting ready.

A: When we first started looking at the distance, we really had no idea. We did some research and found we potentially needed nine months. Planning for that, when you go and buy food, it was weird. We would go out to buy enough stuff to make 90 meals of rice and beans, and that was only a third of our meals. That was what was really crazy, getting the quantity and getting it all bagged. We have all of our food prepared for the entire—if need be—270 days. Hopefully, it’s nowhere near that long.

Q: Did you do any special training to prepare?

A: Not really. I was eating healthier and trying to stay in shape by biking. Other than that, we typically try to plan the beginning of our trip for slower, easier days, so our bodies can get use to it. Even with that, a week and a half in, I was very sore. Even now, the last couple of days, I’ve been sore, because getting back on the Minnesota [River] from the upper Mississippi, the current variance is pretty big. It’s quite a bit more work. 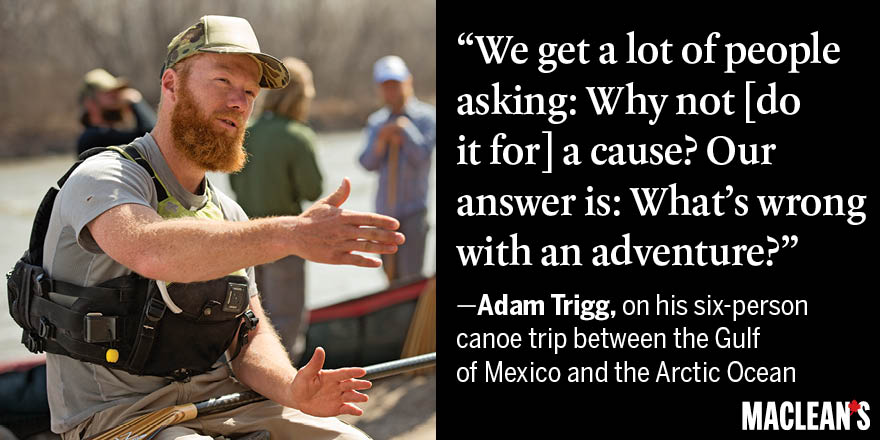 Q: What’s your background with canoeing and the wilderness?

A: I grew up on the Sauk River in St. Cloud, Minn., which flows into the Mississippi River. You get the idea of how water works. As far as camping, I started at a very young age. It slowly grew from there. I started working at REI, which is kind of the equivalent to MEC [Mountain Equipment Co-op] in Canada.

Q: What’s a typical day like on this trip?

A: We get up anywhere from 5 to 6 a.m., depending on the weather, and eat a hot breakfast. It’s usually about an hour and 15 minutes from the time we get up to the time we’re loaded and paddling away. We will get a bit of space in between our boats throughout the day. We don’t stay directly next to each other, unless there’s something the first boat finds that’s a little bit sketchier. Then we’ll stop, group up and do it together, just in case something happens. We’ll typically paddle for two hours in the morning, then we stop and have a coffee break for about a half-hour. Then we’ll get back in our boats and paddle for about 2½ to three hours. Then we’ll stop for lunch. The afternoon, it looks about the same. A typical day is around [44 km], which is anywhere from eight to 10 hours of actual paddling time.

Q: Do you rotate spots on the boat?

A: We switch every day. There are three of us doing stern—the ones who are the most efficient at it, especially with upstream travel. That way, we don’t lose a lot of ground. And the three bowmen switch every day, so, every third day, you paddle with the same person again. You’ll have conversations that you’ll pick up on from three days ago with that person. That’s pretty fun.

Q: After three months, have you gotten tired of the cooking?

A: No. We were talking about this the other day. We have been lucky to have some other meals, with towns being right on the river at times. But we keep a pretty good spice kit and we have good imaginations. You cook with the person you’re paddling with. You get all day to talk about the crazy thing you could try. Usually, you end up with some pretty good meals. I’m sure, by the end, [however], rice and beans and noodles will be close to meeting their end.

Q: What’s been the hardest day so far?

A: I’d have to give that to the lower Mississippi. Once you get [800 km] up the Mississippi, you start getting into the wind dikes and the big barges. The current—with no dams and all that water that’s coming down—gets strong. The river is so wide, the wind comes up and, at this time of year, it’s [-7° to -1° C ]. Meanwhile, every time anything splashes on you, it freezes to you right away. We would get down to the end of the day and I would have a couple of inches of icicles hanging off my gloves, and the whole skirt of the boat had icicles dangling down to the water. You get to camp and you have to get all that ice out, get dried out and get up the next day. 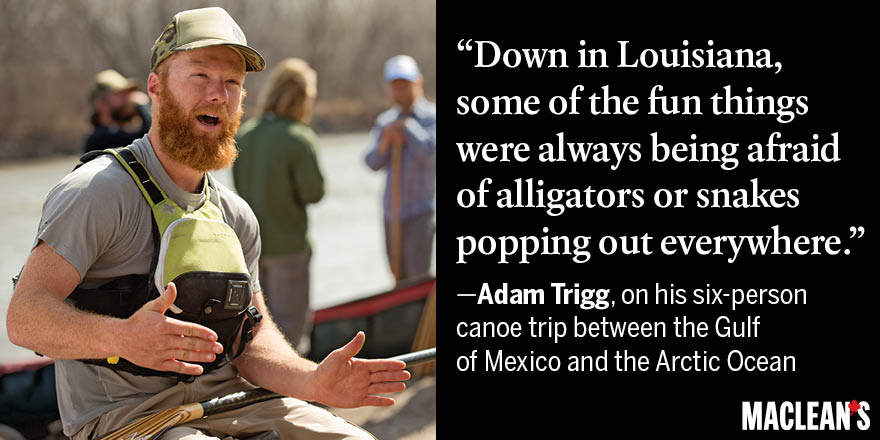 Q: How did you prepare for safety?

A: You’re obviously wearing a life jacket. We wore full rain gear and paddling gloves; that seemed to work. Also, we didn’t have anyone tip over, so that was helpful.

Q: What’s the most unexpected thing you’ve seen so far?

A: The lower Mississippi, for its remoteness. You actually felt like you were in the middle of nowhere. You weren’t. I knew I was [16 km] from Memphis at one point, but you wouldn’t hear trains or cars. That’s all due to the levees that they built. You’d hear coyotes every night. You’d see deer and this natural wildlife. It seemed crazy.

Q: Any dangerous experiences so far?

A: We had a guy who paddled with us for a day and he tipped over. That was a little sketchy, because it was a colder day on the lower Mississippi, but we got him out of the water and he warmed up pretty fast. Not that it was a good situation, but it was cool to see our response [and] to know that we are efficient at doing that.

Q: What were some of the weirder moments of your first 98 days?

A: Early on, down in Louisiana, some of the fun things were always being afraid of alligators or snakes popping out everywhere. Being the winter, they’re pretty docile. We only saw four alligators. One thing we got a lot from people was, “You’re going the wrong way.” We heard that about a million times. It was funny at first, but by the end, it was, “We know we’re going the wrong way.” Then, one lady we met, she told us: “Why don’t you just say, ‘We’re going the wrong way for all the right reasons?’ ” It’s a good answer that we used from then on.

Q: Why not start in Canada and head south?

A: [More than 4,800 km] of our trip is in Canada. We wanted to get the first part done here, where we were around people and got warmed up, then head into where you don’t see anyone for 23 days at a time.

Q: How much canoeing had you done in Canada beforehand?

A: Notable rivers would be the Back River, the Hay River, Bloodvein River, Pigeon River. A lot around the eastern side of Lake Winnipeg. And then up into Kazan River up in Nunavut. Quite a few.

Q: What do you expect to see when you hit the Northwest Territories this time?

A: I’ve never been to the Arctic late in the year. All the trips I’ve done before have been in July, so I’m excited to see the the colours that come with fall. It’d be really cool to see some more caribou. It’s always an amazing moment when you see a whole hillside moving and you realize it’s actually just caribou, and not your eyes playing tricks on you. Other than that, the clean water. Being down here, it’s still beautiful, but [you] don’t ever see into the water more than two feet on the Mississippi. It’s all filthy, whereas you get up in the north of Canada, and you find you can see [six metres] down and all the fish swimming on the bottom below you. That’s one thing that always brings me back to Canada.

Q: Where do you finish, exactly?

A: On the Coppermine River in Kugluktuk, [Nunavut]. Our hope was to do the Hood River, but, logistically, it’s a $28,000 plane ride to get out of there and we couldn’t afford that. We had to change and go to the Coppermine, where there’s actually a town and you can get on a plane and fly out.

Q: Do you have a targeted end date?