Arthur Porter on his life in a notorious Panama prison, his cancer prognosis, and why he was such a success in Montreal 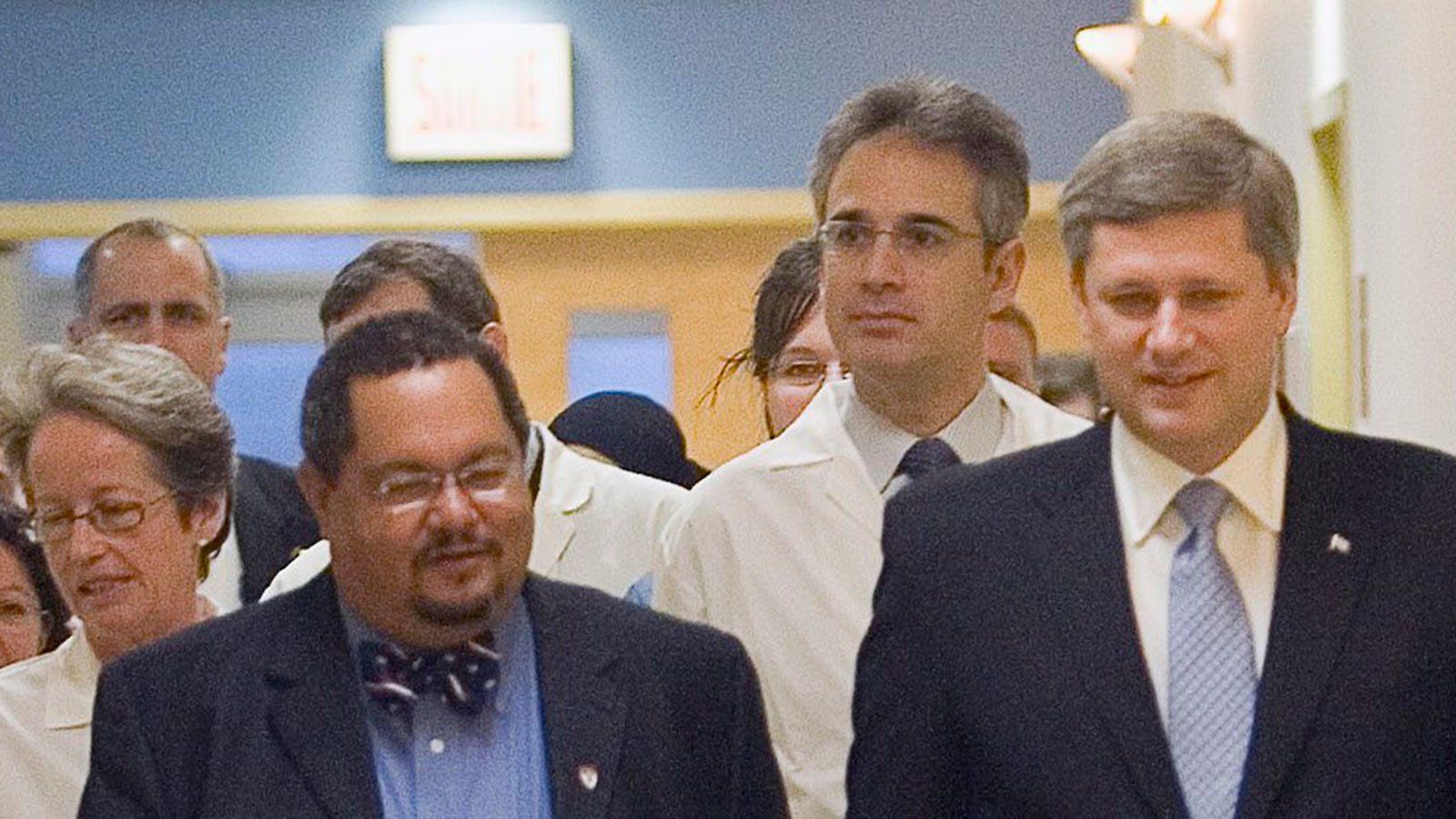 Arthur Porter has been in prison in Panama for more than a year. The former CEO of the McGill University Health Centre is fighting extradition to Canada, where he and several others are facing charges related to a $22.5-million kickback that SNC-Lavalin allegedly paid to secure the contract to build the new $1.3-billion super-hospital. Porter denies any wrongdoing. Born in Sierra Leone, Porter is a well-known oncologist and was appointed by Stephen Harper to the Security Intelligence Review Committee (SIRC), the watchdog of the Canadian security service, in 2008. He was named chairman in 2010. Porter spoke with reporter Jeff Todd, who worked with Porter on his memoir: The Man Behind the Bow Tie: Arthur Porter on Business, Politics and Intrigue.

Q: What is it like doing time in La Joya Prison?

A: Well, I suppose it’s an experience: one I wouldn’t recommend. In a nutshell, it’s a cross between the books Lord of the Flies and Animal Farm. There are no guards in the prison, except when they do random searches with machine guns. The rest of the time we are left to our own devices. As a result, we all have a job to do and the pecking order is well established. There are carpenters, cooks, gang leaders. I suppose I have become the prison doctor. You can get most things into the prison if you have money and connections. Alcohol and drugs are common. It is almost like a little town, a little society with its own rules and its own boundaries. It is possible to make a life for yourself in La Joya and survive, but it is also very unpredictable place and your life can change on a dime.

Q: Can you describe your cell?

A: There are over 500 persons in a block made for about 200. All of the cells are unlocked. People come and go as they please. However, the vast majority of prisoners are forced to sleep on the concrete floor in common areas and in hallways due to the overcrowding. I am actually not in a cell as there is no space, but live on a small space on an internal roof on top of the cells. It is like a little shantytown structure, which a few of us have put together with spare bits of wood, cardboard, etc. We have built some makeshift bed spaces where we sleep. Believe it or not, I’m one of the fortunate ones. We use a bucket for a toilet, which is shared by some 200 people. It’s pretty primitive here.

Q: Do you have fresh water?

Q: What violence have you witnessed?

A: I have seen everything from the results of regular fights, to the aftermath of knives and guns, and even torture and rape-related injuries. Every once in a while, the whole prison erupts in violence. This month [August], there were two riots. On Aug. 8, a riot team arrived unannounced. As the raiding party entered the building, several people were shot: some with bullets, others with gas. I was shot in the face with gas. I managed to crawl to the stairs but got pushed down them, damaging my leg. I somehow got to an exit but lost consciousness. Then the prisoners started stoning the police. The police retreated to outside the compound. Prisoners took control and locked themselves inside. I regained consciousness but had some pain breathing and walked with a serious limp. My sight was blurred. This is a brutal place.

Q: Have you ever been threatened?

A: Initially it was a case of finding one’s position in a very jungle-like hierarchy. My usefulness as a doctor kept me on the sidelines of most of the gang-related violence. That incident in August was the worst for me.

Q: What is it like being the prison doctor?

A: I’ve had to improve my medical skills. I was an oncologist and now I seem to be more of an emergency room physician. I have treated more than 100 people, from stitching up facial injuries, to cardiac and asthmatic attacks. They are many infections—pneumonia, fungal skin, gastrointestinal. Often these relatively simple ailments can take the forms of mini-epidemics. The prison clinic itself is very poorly equipped and staffed. Most prisoners come to me for their treatment instead.

Q: Do you have access to medicine and medical materials?

A: I make do. When I arrived I had a little hotel sewing kit to suture lacerations and some fairly serious facial injuries. I used a set of pliers and sometimes a little bit of a drug as a local anaesthetic to remove teeth. I’ve gradually been able to build up a small inventory of medications, which you get from other inmates. Some I’ve bought. It is possible to buy and sell things in prison, if you have the resources. I see two or three patients on average per day.

Q: About a year ago, your oncologist, Karol Sikora, said that you had a year to live.

A: I hope to live a long time! However, as an oncologist myself, I know that Karol was correct. When I was diagnosed in January 2013 I knew the usual outcome for an adenocarcinoma of the lung with spread to the liver, lymph nodes and bones was pretty bad. I was lucky that my tumour was ALK positive, which is a kind of tumour marker, and responded to a new drug called crizotinib. It can cause a complete response in about one per cent of cases and I hope I’m in that category. The problem is nobody knows how durable that sort of response is. So I believe I am doing well at the moment.

Q: How have you managed your cancer?

A: It has been difficult. When I arrived I was not only on twice-daily chemotherapy [taken orally], but also on anticoagulation as I had had a pulmonary embolism, which is a blood clot in the lung, in March 2013. Managing without blood tests was challenging. I almost felt I had to manage myself empirically. For example, if I peed some blood, I reduced the dose. The worst was probably the vomiting and diarrhea associated with the chemotherapy, together with the unsanitary nature of the washroom facilities. I developed infections on a regular basis.

Q: Do you think the Canadian government would prefer you simply die in prison?

A: Well, they certainly have not helped me get medical attention. In fact, I was told that they actually hindered some of that opportunity. Panamanian authorities did approve me to go to hospital but I understand, this is what I was told, Canada did not approve it.

Q: As a privy councillor, do you think Parliament will still lower the flag, as is the custom, to half-mast whenever your time comes?

A: Well, I hope they do. What I do know is I continue to be treated as if I have committed a crime and been found guilty—and have not. So I expect they should.

Q: Are you surprised Stephen Harper, who appointed you as chairman of the Security Intelligence Review Committee (SIRC), has distanced himself from you?

A: In everything I have done, whether it is building a hospital, or running SIRC, I have always tried to do my best. It is not something I’ve done to make friends, but to do the right thing. Prime Minister Harper needs to be responsive to his political realities. I can say I am proud to have worked for him and I don’t think that as far as my handling of SIRC was concerned he will have anything negative to say about me.

Q: If you could do it all again, would you have taken that job in Montreal?

A: You know, I came to Montreal to do a job—get a hospital project [going] that had been stalled for years. Not only did we do that but we developed one of the best-funded research institutes and I think it is truly a world-class medical enterprise. However, in the eight years I was there and at the helm of that institution, I paid a heavy price and now I am paying an even heavier price. Frankly I doubt whether I would do it again. The politics were insidious, petty and difficult.

Q: You have a wife and four daughters. How have they been impacted by the scandal?

A: It has been absolutely terrible. It has truly broken a tight-knit family and that is probably what makes me the most angry.

Q: If your health is an ongoing concern, why not come home and be near them?

A: I would absolutely be happy to be home. But remember my home is the Bahamas. I was living in the Bahamas running my Cancer Centre for years before I agreed to go to Montreal in 2004. My family never moved to Canada. That’s where the kids are, my house and that’s even where my dog lives.

Q: Many observers have criticized you for fighting extradition if you are truly innocent.

A: I watched how the media treated me ever since I resigned from SIRC in the aftermath of taking on the ambassadorship [to] help my native land, Sierra Leone. I watched the witch hunt that moved from event to event. I was travelling [when I was arrested] on my diplomatic passport. I was illegally arrested and, if anyone knows me, I don’t like to be wrongly treated, even by Canada.

Q: Do you expect to stand trial or do you think you’ll be back in Sierra Leone?

A: I have never said that I would not answer any and all allegations against me from whatever source. I intend to do so, wherever I am.

Q: Why was Montreal’s business establishment so enamoured with you?

A: What I said I would do, I did. I did not necessarily do things that were popular and perhaps I did bully from time to time. But I delivered.

FILED UNDER: Arthur Porter The Interview