'She thinks she's a princess.' Miss P's hander tells all

In conversation with William Alexander, the 'Wayne Gretzky of dog shows' 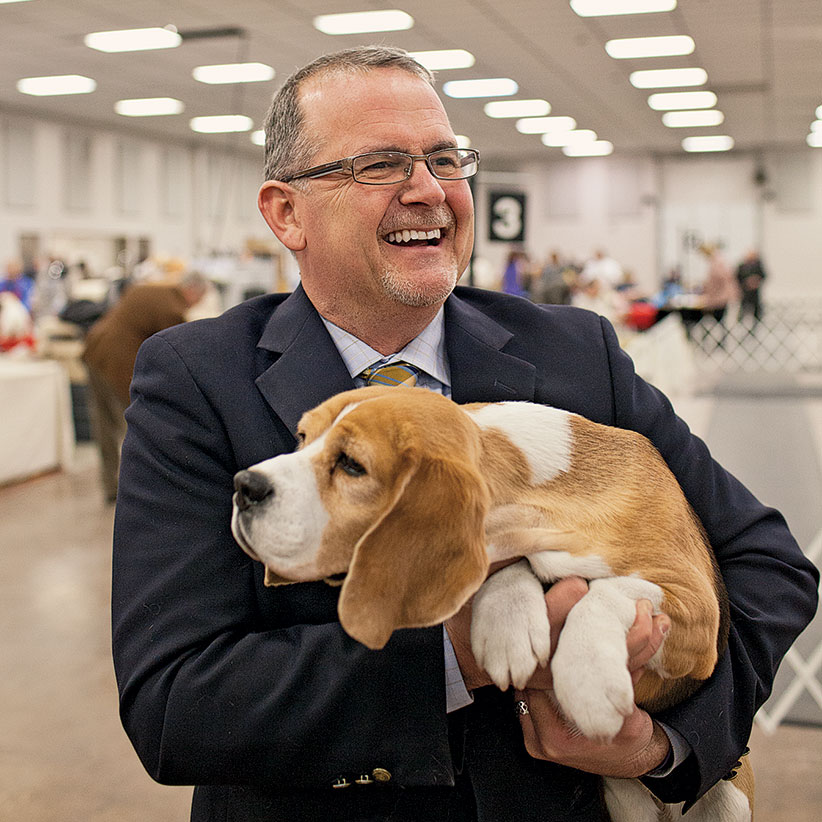 Shortly after their beagle Miss P was born in 2010, dog breeders Lori and Kaitlyn Crandlemire of Enderby, B.C., enlisted the help of Milton, Ont.’s renowned dog handler, William Alexander, known as the “Wayne Gretzky of dog shows,” to turn their puppy into a star. After four years and 19 Best in Show titles, their ultimate dream came true on Feb. 17, when Miss P was crowned Best in Show at the Westminster Kennel Club dog show in New York—just the second beagle to win the title since the first show was held in 1877. After making the victory rounds in Manhattan—including an appearance on the Today show, a steak lunch at Sardi’s, and a visit to Donald Trump’s office—Miss P and Alexander headed home. Even though Miss P is retiring, she will remain at Alexander’s side as he continues showing dozens of other dogs. Maclean’s caught up with them at the Woodstock and District Canine Association three days after their big win.

Q: What is so special about Miss P?

A: She’s pretty much a natural at this. Miss P thinks she’s the most important dog there is—and no one has told her she isn’t. She thinks she’s a princess, she’s very demanding, and she thinks the world is all about her. Things always have to go her way or the highway—she has always been that way. And at Westminster, I could tell she was aware that the whole world was watching her.

Q: When did you and Miss P first meet?

A: I met her in Calgary when she was six months old, so 2010. I saw Miss P ringside at a dog show there, with a girl, her owner, Kaitlyn. I was ringside to see another beagle, actually, and I was captivated by this little girl’s beagle. I think I even scared Kaitlyn a bit; she was wondering who this guy was, taking pictures of her dog. I fell in love with P right there. Kaitlyn’s mother, Lori, who owns Miss P, came to me later on and asked if I would show P the next day. I did, and we won best puppy overall. She became a champion, and the judge, Michael Hill, suggested we call her Miss P. The divine Miss P. And Lori even said to me that day she had a feeling we’d go on to win Westminster. Finding a dog like Miss P is what keeps me going in my career.

Q: What sort of training did you have to undertake to win Westminster?

A: First, there needs to be hard work, dedication and love for these animals. They wouldn’t do this if they didn’t love you. Miss P is a combination of athlete and supermodel. You have to make her beautiful, and you have to make her fit and in shape. She jogs on the treadmill, she’s groomed constantly. People think beagles are a wash-and-wear dog. True, beagles aren’t glamour dogs like poodles or Afghans, but there’s still a lot of trimming and effort that goes into preparing them for the shows. Beagles look best when they are muscular, and that’s the thing about Miss P: She’s very active for a beagle, a tremendous athlete. The jobs for a beagle, traditionally, are to hunt hares, and the way that she’s built, she could run around and do that all day. She’s so free with the way she moves. It’s effortless. And she has a beautiful headpiece for a beagle. She’s simply beautiful.

Q: Beagles are members of the hound group, easily distracted by their acute sense of smell. Is this something that’s difficult to deal with when you’re training them for shows?

A: Yes, Miss P’s food drive is incredible. The No. 1 drive for all beagles is food. That’s one thing that’s definitely a challenge, but it’s something that can also work in my favour. Food is something I know they love, and I use it to encourage good behaviour. I love working with beagles because their personalities are great; they aren’t afraid of anything, and they’re a very proud breed. That’s what beagles are all about.

Q: Some people are worried that after Miss P’s win there might be a “Dalmation effect,” where people will buy beagles without considering possible downsides. Would you say beagles are a good choice of dog for the typical family?

A: Beagles are a wonderful breed. If people do their research, and they go to the right place to get one, of course, I would suggest a beagle. You choose a reputable purebred breeder who looks after his or her animals, and beagles can be wonderful pets. Just look at Snoopy.

Q: What has your work with dogs taught you about humans?

A: In my career, I’ve learned the importance of having faith in other people, and to trust in yourself. When I’m out in the ring with the dogs, if I don’t trust my dog and I overwork him or her, it never works out. The same goes for people. There are certain things we cannot control beyond ourselves. There are times when we have to give people space, and let things unfold naturally. The most challenging part of my job is getting to know my dogs, how they think, and how they will react in certain situations. Over time, because of our mutual trust and devotion, Miss P has become so stable. Last Thursday, for example, we were at the Empire State Building in New York after the show, and there must have been 200 photographers chasing us around. She was fine; I was the one having anxiety.

Q: Your book, For the Love of Dogs, was published last month. It’s a novel about a young boy, Garry, who gets involved with dog shows. What made you decide to write the book?

A: The book is aimed at young adults, who are around 12 and 13 years old, to try to get them interested in purebred dogs and the sport of dog shows. It’s a story about how dogs can get you through the tough times; how their unconditional love can get you through the turmoil of life. My family got me involved in the sport at seven years old and I haven’t looked back. For instance, when I was 39 years old, I had a heart attack, and I was showing an Irish setter named Piper at the time. He got me through that, his spirit and his kind heart. We ended up winning 109 Best in Shows together. When it comes to dog shows, they are a really good family sport, and it has meant the world to me—and I wanted to share that with Canadians. It’s a great way to teach kids about responsibility, because they have to care for another living creature; humility, because you don’t always win. And it teaches you to constantly strive to be a better person. It’s a microcosm of the real world, as far as I’m concerned. You learn about the importance of earning your successes, that things aren’t just handed to you. 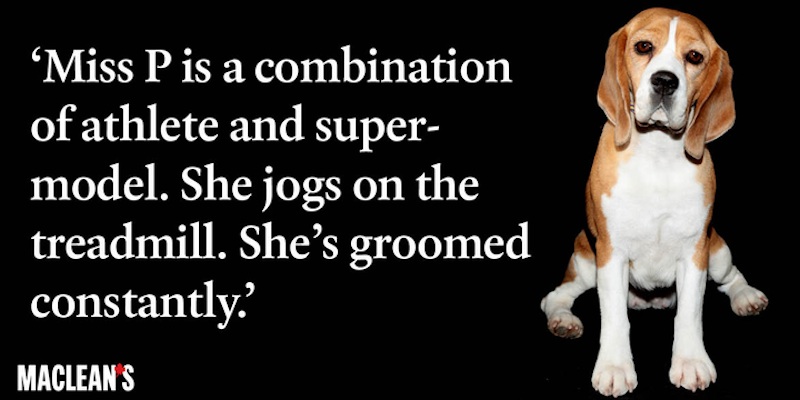 Q: What’s the future of dog breeding and dog shows in Canada?

A: Here in Canada, we are losing the next generation of dog breeders, dog-show judges and handlers. I’m worried about the future of the sport. I would say it’s on the decline. There aren’t very many young people getting involved. We need to have more kids wanting to volunteer at their local kennel clubs. And it’s important for the kennel clubs to start promoting this sport and the importance of purebred dogs. Purebred dogs need to be at the forefront again. There’s so much going on in the world today that’s distracting youth, and this sport is just something that hasn’t been on their radar. It’s a world that can be so fulfilling for young people. Dog shows are really the most accepting sport there is. But it’s not just about the dogs; it’s about building lifelong friendships. People from all walks of life and cultures compete in this sport. For families looking to get involved, a good place to start is the Canadian Kennel Club or their local kennel club, and they will welcome you with open arms. If you love animals, there’s nothing more rewarding. These people at the dog shows, they take you exactly as you are. And although it can get competitive, there’s never any bad blood, and people are thrilled when you come out on top.

Q: How has this work affected your life?

A: The handler who won best handler in the U.S. this year said that when he young, he was introverted and shy and it was competing in dog shows that turned him into a better person. There’s no question that’s the same for me. What’s been especially rewarding is seeing how my dogs, Miss P included, have an impact on the broader community. Just this morning, I got a call from a doctor in the States whose 15-year-old niece has a horrible heart problem. He asked me if she could meet Miss P. So we’re going to be having a FaceTime call tonight for her to meet her. There’s no question dogs can provide wonderful therapy. Miss P and I went to Ronald McDonald House in New York after the win and I had one mother come up to me afterward and she said she hadn’t seen her little boy smile like that in a week. To see the impact dogs can have on humans, that’s the kind of thing that makes me feel great about what I do.

A: Motherhood. We’re going to find an appropriate husband for her and [I hope] she will continue a wonderful line of beagles. We’re still undecided about where she will end up. I’m sure Kaitlyn and her mom would like to see her back home in B.C. She and I will continue to go to shows together. It still hasn’t hit me that we won, and I’m sure I’ll sit up in bed one day soon and finally realize that I won Westminster. Well, Miss P did. I’m just along for the ride.