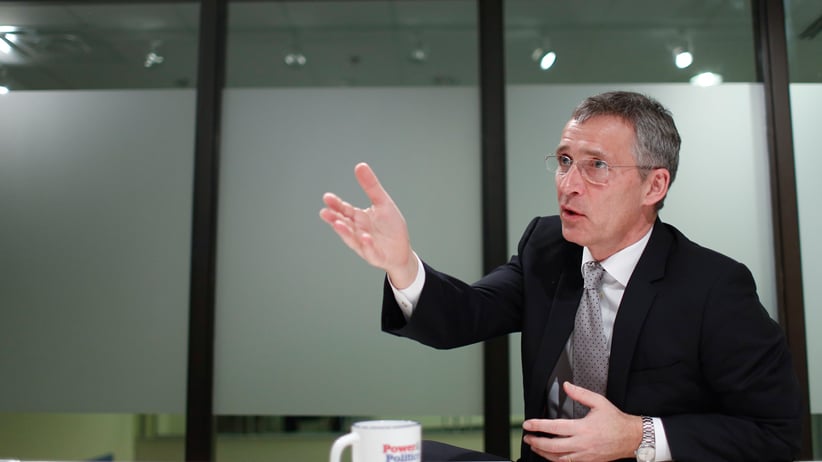 Jens Stoltenberg has been secretary-general of the North Atlantic Treaty Organization since October. Before that, he was prime minister of Norway for nine years. He was in Ottawa this week.

Q: You met this morning with Prime Minister Harper and with some senior ministers, including Jason Kenney and Rob Nicholson. What were those conversations about?

A: The main topic was how Canada and NATO can adapt and respond to a fundamentally changing security environment. We see an assertive Russia violating international law, annexing a part of another country. It’s the first time since the Second World War that has happened in Europe. And we see at the same time ISIL [Islamic State], a barbaric terrorist organization, spreading turmoil across the Middle East and North Africa. And there are links to terrorist attacks in our own streets—on both sides of the Atlantic; you have the terrorist attacks here in Canada—inspired by the ideology of hatred that ISIL conveys.

A: Iraq has requested NATO for defence capacity building. We are now assessing that request from Iraq. That’s about helping them with reform, with building institutions—educational institutions within the army—modernizing the army, increasing the training. It’s about increasing countries’ ability to defend themselves, to fight ISIL themselves. In the long run, that’s the only viable strategy: to enable more countries in the region to have ownership and to fight ISIL themselves.

Q: In Europe, the response since Russia started being active in eastern Ukraine has been to draw a thicker line around NATO. Ukraine’s outside that line. There’s a big debate now about providing lethal assistance to the Ukrainian government. Is that something that you would advise? Isn’t it full of risk?

A: I will answer that question in a moment. But NATO’s main responsibility and core task—the reason why the alliance was founded—was to provide security to all allies, to all nations within the alliance. And that’s still our core task. Therefore, my main responsibility is to make sure we keep NATO strong. So you are right. The main responsibility of NATO is to make sure that anyone who considers attacking any NATO ally should know that if one ally is attacked, the attack will not meet one but 28 allies. We provide deterrence by having a strong NATO. In addition to protecting all allies, we are also working with partners in the Middle East and North Africa, but also in the countries east of the alliance in Europe. And that’s also the case for Ukraine.

NATO is providing strong political and practical support for Ukraine. Strong political support for Ukraine meaning we are defending their sovereignty and territorial integrity, and we are still conveying a very strong message that Crimea is illegally annexed. It’s not part of Russia, it’s part of Ukraine. We don’t recognize the illegal and illegitimate annexation of Crimea.

Now, to answer the question: NATO does not have weapons. So we are not in the situation where NATO’s going to make any decisions related to supplying weapons to Ukraine. Every nation has the right to defend itself. That also includes, of course, Ukraine. But it’s up to the different allies to decide on the question of provision of weapons or equipment to Ukraine. It’s not something that NATO’s going to decide.

A: It’s up to Canada to decide whether, and what kind of equipment and weapons, Canada will provide to Ukraine. Ukraine is a sovereign independent country.

Q: Peter Hitchens is a vocal defender of Russia. He writes: “Two great land powers face each other. One of these powers, Russia, has given up control over 700,000 sq. miles of valuable territory. The other, the European Union, has gained control over 400,000 of those square miles. Which of these powers is expanding?”

A: I think that’s a completely wrong statement. It’s independent nations that have knocked on the door and wanted membership. It’s not NATO in any way moving east—it’s the east wanting to join NATO and/or the European Union. And that’s the sovereign right of every sovereign nation to decide. So this idea that this is something that is lost for Russia and gained by the European Union is the wrong concept. Every nation has the right to decide its own path, including what kind of security arrangement it will be part of. This is a fundamental principle; it’s enshrined, for instance, in the Helsinki Final Act, which Russia has also subscribed to. No one has been forced to become a member of the European Union or NATO; everyone who has joined the European Union and NATO has joined because of their own free democratic will.

Q: On the other side of the debate, there are those who say that if NATO wants to show it’s serious, it should extend membership to Georgia and Ukraine. How would you answer that?

A: We still offer an open-door policy. The open-door policy is enshrined in the Washington Treaty, it’s part of the founding act for the alliance, and the open-door policy has been a great success as a contributor to stability and peace in Europe. When it comes to Georgia, we have very substantial co-operation going on with them. We are establishing a training centre and working with Georgia to enable them to move forward on the path towards membership. Ukraine? Some years ago, they applied for membership, and I respected that. Then they decided to be a non-bloc country. Now they have started the process of reforming with the aim to apply for membership later on. If and when they apply, we will assess that application.

Q: The decision rule is consensus among heads of government, is it?

A: Yes. And whether a country is going to be a member of NATO or not is a decision by the country and the 28 allies. No other country has the right to intervene or veto.

Q: How likely is Ukraine to get into NATO? It’s got an occupying army on its territory.

A: It would be wrong of me to speculate. Ukraine has emphasized that this will take some time.

Q: Part of NATO’s various efforts to demonstrate that it is a strong alliance is to request that member states pay two per cent of GDP on defence. Canada has been going in the other direction, and it’s not alone.

A: First, I would like to underline that Canada is really contributing to the alliance. Canada has capabilities which are of very high quality, and has proven several times that it is willing to use them. We’ve seen it in Afghanistan over a long period of time. We see it now in the reassurance measures in [eastern Europe] and we see it in the fight against ISIL. So Canada is a highly valued, staunch ally.

NATO heads of state agreed last fall that we have to invest more in defence. And the reason is that the world has changed. We’re increasing the readiness of our forces, we are more than doubling the size of the NATO response force from 13,000 to 30,000 and we are establishing command-and-control units in the eastern part of the alliance. The picture when it comes to defence spending is a bit mixed. Four allies —the U.K., Estonia, Greece and the U.S.—are at two per cent already. Poland will most probably reach two per cent this year, [or] at least very close. Latvia [and] Lithuania have announced that they will increase [spending] substantially, and they will reach two per cent within a few years. Germany has announced they will start to increase their defence spending. Others are not doing so. So the picture is mixed. I have conveyed the message to all the governments I’ve met that it’s important to gradually move toward two per cent. It’s not something I expect will happen overnight.

Q: As you said, Article 5 says an attack on one NATO member is an attack on all of them. But the precedent in Ukraine is that it’s not always clear when an attack is under way. Is it possible to imagine some low-level harassment campaign against a NATO-member state that would not incur a response from NATO as a whole?

A: Every crisis is unique. Therefore, we have to be prepared for many different kinds of crises: what we call “hybrid warfare” or deception, covert actions and so on. That’s why we are increasing the readiness of our forces, so we can deploy them, have the right forces at the right time in the right place. That’s why we are investing more in ISR, or intelligence, surveillance and reconnaissance; better situational understanding is extremely important.

A: We have never said, “If they do ‘x’ then we do ‘y.’ ” What we say is that we will defend and protect all allies against any threats. We are expanding our ability to reinforce, to deploy forces on very short notice. We have more troops on the ground, more planes in the air and more ships at sea as a response. We have the new command-and-control units, which are going to be established in the eastern ally countries. All of this is increasing our readiness, our ability to reinforce, to respond and to be there, if needed.