The Inuvialuit's secret paradise at the Yukon's Shingle Point

Peter Mather travelled to the Yukon’s Arctic coast, capturing blissful images of the Inuvialuit's summer retreat: sun, games and all 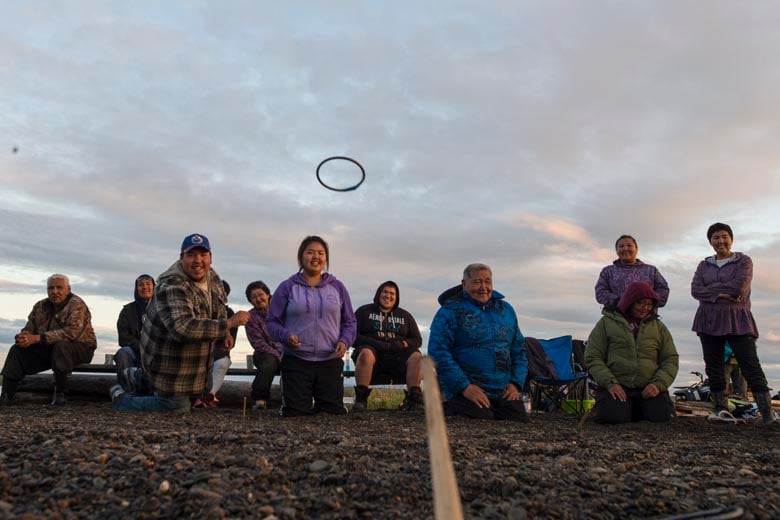 Kiptouk is a traditional game, played in teams of two, with rules very similar to Horseshoes

At 1 a.m. one morning in mid-July, about 70 people gathered at the tip of Shingle Point along Yukon’s Arctic coast for a tournament of the traditional ring-toss game, kipotuk. Nearly everyone in town took part in the tournament, from kids to grandparents. Amid the socializing, they played until a winner was determined four hours later. “The elders are really good, because they’ve been playing them for so long and they’re not really physically demanding,” says Peter Mather, a photographer based in Whitehorse. “A lot of the games were won by 70-year-old men.”

Mather frequently heard about this gathering in Shingle Point during his travels across the Arctic for other photography projects. Locals from multiple communities told him it was a place where Inuvialuit people—from Kaktovik, Alaska, to Tuktoyaktuk, N.W.T.—would visit for a month in the summer to reconnect with family and to hunt and fish. But to reach Shingle Point, by boat, at least, requires hours of travel. “The people who go to Shingle are ones who really like to go out on the land,” Mather says. When he arrived, a group was pulling in a beluga whale that would provide enough food for 10 of the cabins set up along the peninsula. “There was so much energy and happiness,” Mather says. “It was the perfect greeting.”

Also ideal, especially for taking pictures, was the lighting. In photography, the “golden hour” refers to the time of day just after sunrise or right before sunset when daylight is softer and has a reddish hue. During this time of year in the Far North, that “golden hour” lasts all night. “The sun doesn’t set,” Mather says. “It goes along the horizon for six hours.” Kids are out playing at 3 a.m. as elders keep a close watch. Young men practise the “one-foot-high kick” in preparation for the upcoming Arctic Winter Games. Adult men and women, meanwhile, will work and hunt for food. From 11 p.m. until 6 a.m., Mather says, “you’re just shooting non-stop.”