Why Stephen Harper is so afraid of Omar Khadr 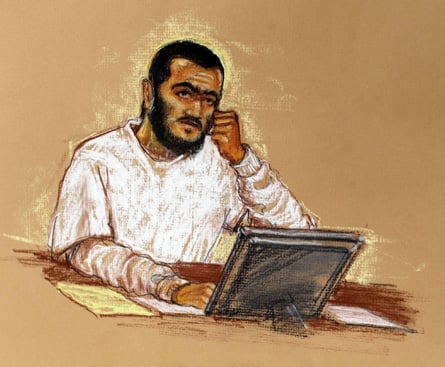 Among the bureaucrats at Foreign Affairs, it’s known as the “Khadr effect”—the fear that sticking up for a Canadian citizen arrested in another country may come back to haunt the government. The cautionary phrase dates back to 1995, when the World Trade Center was still standing and the Khadr name meant something only to a handful of spies at the Canadian Security Intelligence Service (CSIS).

In those days, Toronto’s Khadr clan was shuttling between Pakistan and Afghanistan, mingling with al-Qaeda elites and dabbling in “charity” work. In November of that year, when a bomb leveled the Egyptian embassy in Islamabad and killed 16 people, the family patriarch, Ahmed Said Khadr, was among the suspects rounded up by Pakistani authorities. Ottawa has never forgotten what happened next.

Khadr proclaimed his innocence, embarked on a hunger strike, and ended up in a hospital. His case became front-page news in Canada—just as Jean Chrétien was flying to the region for a trade mission. Under pressure from the press, the prime minister took time out of his busy schedule to meet the suspect’s wife and children, and made sure to broach the case with Pakistan’s late leader, Benazir Bhutto. A few months later, Ahmed Khadr was a free man—kissing the ground when his plane landed in Canada.

He didn’t stay long. By 1998, the family was back in Afghanistan, living in the same compound as Osama bin Laden. In 2001, Khadr’s name was added to a United Nations’ terrorism blacklist, and when the Twin Towers were attacked, the U.S. branded him a “primary suspect” and froze his assets. Chrétien, it turned out, had gone to bat for a very bad man.

Al-Qaeda’s senior Canadian was never again in police custody; he was killed in a gunfight with Pakistani troops in 2003, and eulogized as a martyr. But his narrow escape back in the mid-1990s is not without some poetic justice. The chill he left behind in the Department of Foreign Affairs—the so-called “Khadr effect”—has been most detrimental to one person in particular: his beloved son, Omar.

Arrested on the battlefields of Afghanistan at the tender age of 15, Omar Khadr is famously accused of throwing a grenade that killed Sgt. Christopher Speer, a decorated U.S. army medic, in July 2002. Now 23, he has been locked inside the American prison camp at Guantanamo Bay, Cuba, for more than seven years. He is the only western citizen still there—and to a large extent, he has his father to thank. The Canadian government learned the hard way that lobbying for a Khadr is bad public policy, and the feds are petrified of being bitten twice.

“All it takes is a phone call—a call between the prime minister and the president,” says Dennis Edney, Khadr’s ever-relentless lawyer. “I’m told that the Americans don’t have any concerns about sending Omar back to Canada. All the pressure is coming from Stephen Harper.”

Which brings us to tomorrow’s hearing in front of the Supreme Court of Canada, a showdown that will decide whether the prime minister has a legal duty to ask Barack Obama a question he absolutely dreads: Will you please transfer Omar Khadr back to Canada?

In all the years Omar has been stuck behind bars, Ottawa has never once—not under the Liberals, and not under the Conservatives—asked our neighbour to send him home. The feds have simply stuck to the same old talking point: Omar is facing serious charges in the U.S., and we respect the American justice system. That may be true. But it’s also true that Ottawa doesn’t want to ask for Khadr back because they’re terrified the Americans just might say yes.

And then what? Do we put him on trial here—a 15-year-old boy who was following the orders of his radical father, and has already spent one-third of his life in prison? Or do authorities simply let him reunite with his infamous family and their radical sympathizers? The concern is obvious. Khadr Effect: Part II.

“The only concern the Americans have is with his family,” Edney says. “But I have talked to Omar about that, and he has agreed not to go back to his family—and the family has agreed not to push it.” The family, of course, needs no introduction. Zaynab, Omar’s outspoken older sister, was under investigation in Canada for suspected terrorist links, and had her laptop seized by the RCMP, while Abdullah, one of his brothers, is facing extradition to the U.S. on charges he smuggled guns for the bin Laden network. Another brother was paralyzed from the waist down after being shot in the same firefight that killed his father. But Edney insists Omar is nothing like the others. “When you talk about the Khadr brand, there is no distinction,” he says. “But there is not an ideological thought in Omar’s brain. He’s just a kid who wants to be a doctor and who wants to get on with his life. I’ve never met a more peaceful guy.”

In the months after his arrest, the Americans considered young Khadr a prized catch, a treasure trove of intelligence about his father’s al-Qaeda connections. The skinny teenager reportedly “sang like a bird” during hours of interrogations and later admitted to tossing the grenade that killed Sgt. Speer. Khadr has since claimed he was tortured into confessing—the harsh treatment, he says, included sleep deprivation, short shackling, and threats of rape—but the Bush Administration was still determined to make an example of their Canadian captive. While other Gitmo prisoners were being shipped back to their home countries, Khadr was charged with murder and ordered to stand trial.

Today, however, Omar is looking less and less like a murderer. Newly released photographs reveal that he was badly wounded and buried under the rubble of a U.S. air strike at the same time he supposedly threw the grenade. Even if he did kill Sgt. Speer, his age—15 years old—means he was a child soldier at the time, and not legally responsible for his actions. And killer or no killer, seven years in a legal black hole is probably punishment enough.

The White House may reach the same conclusion in the coming days. President Obama has promised to close the Guantanamo jail by the end of January, and a task force is now poring over every case to figure out the best option for each prisoner. As for Khadr, two possibilities loom: trial by military commission, or trial by civilian court on U.S. soil. A decision is expected as early as Monday.

In the meantime, the Supreme Court of Canada is mulling a third possibility: repatriation. If the judges side against Ottawa, Stephen Harper will have no choice but to ask the Americans to return Khadr. Such a request won’t guarantee his release—the U.S. is under no obligation to agree—but it will certainly alter the playing field. “If we are successful, then Obama has something to hang his hat on,” Edney says. “And Harper just washes his hands. He can say: ‘I’ll ask—I can’t tell you how nicely I’m going to ask—but I’ll ask.’”

Friday’s hearing will mark the second time Canada’s highest court has weighed in on the saga. Last year, the judges ruled the government violated Khadr’s Charter rights by dispatching CSIS agents to grill him in 2003 and 2004, at a time when prisoners had no access to lawyers or independent courts. To compensate for the Charter breach, Ottawa was ordered to release all the Canadian evidence gathered during those CSIS interrogations—including hours of videotape that show a 16-year-old Khadr pointing to his bullet wounds and begging the unnamed spy to take him home.

Along with the recordings, Khadr’s legal team also obtained a damning memo written in 2004 by a Canadian bureaucrat, who said Gitmo guards subjected the teenager to three weeks of sleep deprivation in order to make him “more amenable and willing to talk” to visiting Canadian officials. He described the technique as the “frequent flyer program”—moving Khadr from cell to cell every three hours for three agonizing weeks. Armed with that revelation, his lawyers went back to Federal Court and claimed a further Charter breach. A judge agreed, but this time, the restitution was much more significant: Ottawa was ordered to ask the Americans to repatriate Khadr.

In August, the Federal Court of Appeal upheld the ruling. “Canada cannot avoid responsibility for its participation in the process at the Guantanamo Bay prison by relying on the fact that Mr. Khadr was mistreated by officials of the United States, because Canadian officials knew of the abuse when they conducted the interviews, and sought to take advantage of it,” the appeals court wrote, in a 2-1 decision. “While Canada may have preferred to stand by and let the proceedings against Mr. Khadr in the United States run their course, the violation of his Charter rights by Canadian officials has removed that option.”

The Supreme Court will have the final word.

Federal lawyers will argue that the business of foreign affairs belongs to elected officials, not the courts, and governments have no legal duty to fight for the freedom of every citizen arrested abroad. Demanding the return of Omar Khadr, they say, will set a dangerous precedent. Ottawa’s lawyers may also point out—as they did in front of the Federal Court of Appeal—that if Harper did ask for Khadr’s return, there is “one chance in a million” that the U.S. would even agree.

But until he actually asks, we’ll never know.