Can the Alberta PC dynasty survive calling the cops on one of its own leaders? 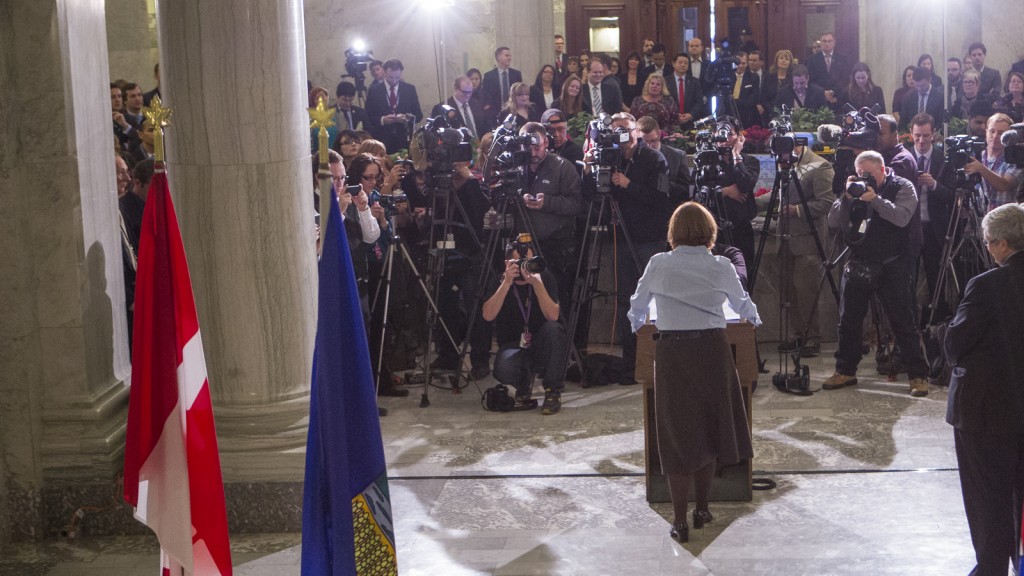 What will Alison Redford’s premiership be remembered for? She summarized her own legacy in the statement she released when resigning from the Alberta Legislative Assembly Wednesday. And it is a little sad.

As premier, she raised mental health funding; raised assured-income payments for the disabled; raised teacher salaries. You or I could have done all that, especially if we were willing to take our province’s platinum credit rating and flash it for the bond markets for the first time in decades. Redford also cited “equality rights”: her Alberta government explicitly wrote sexual orientation into human-rights law, although the Supreme Court had actually put it there 16 years ago, and the change turned out to create more new equality issues than it settled.

She mentioned “many issues that we needed to deal with that were always going to take longer to fix”, which reminds us of grandiose, forgotten promises for new primary health care megacentres and loads of new schools. She touted the expensive constellation of new international trade offices opened on her watch, one of which served as a luxurious landing pad for her defeated leadership rival, Gary Mar. A one-party state looks after its own.

Her ouster leaves the continued existence of these Alberta outposts in doubt. Certainly whoever ends up as her ultimate successor will go over the list and ask which trade offices, if any, are worth the money. And if the next premier doesn’t do it, the auditor-general eventually will.

At one time, I confess, I rather expected Redford to use one of the trade offices as a personal bolt-hole. (Indeed, I would have bet hard cash that they were going to build one in Johannesburg for her.) This would comport with Alberta tradition: in the Twenties, when the caucus of the United Farmers had to do away with the ineffectual, depressed Premier Herbert Greenfield, he was made the province’s agent-general in London. There was a brief outcry against such naked patronage at the time, but it didn’t last. People were too glad to be rid of him.

But the latest news about Redford’s behaviour—or the behaviour her personal eccentricities ended up requiring from others in government—has probably closed even that door. The auditor-general found that not only was Redford making purely personal use of the Alberta government’s fleet of puddlejumpers: Treasury Board employees were sometimes filling seats with fake passengers to guarantee that she would be able to fly in a virtually empty cabin. In accepting her resignation, transitional Premier Dave Hancock bowed to demands from both opposition parties and PC leadership candidates, and announced that he would pass the auditor-general’s report to the RCMP for a potential investigation.

A police investigation will probably come to nothing. The most obvious criminal charge would be breach of trust, and, as University of Alberta crim-law prof Peter Sankoff observed on Twitter, that offence “has [a] high threshold, to distinguish the dirty public officials from the REALLY dirty public officials.” Maybe that memorable observation will be Redford’s legacy.

Or maybe we will finally just get rid of the damn planes, and Redford will be remembered for that. Back in 1995, when Ralph Klein was found through freedom-of-information requests to be making incredibly wasteful use of the fleet, a lot of people asked why Alberta hadn’t privatized its air service at a time when it was privatizing the bejesus out of everything else. The question was never answered with anything but Kleinian snarls and threats, and here we are.

Can the Alberta PC dynasty survive calling the cops on one of its own leaders? Most Alberta voters, I suspect, will go over the events and revelations of the last year and think: “Are we turning into British Columbia or what?” Redford fell from power because she appeared to be foul-tempered and paranoid as well as ethically dubious, but if we are being honest, her scandals are at least as much a matter of evolving standards as they are worsening behaviour.

Under Redford, the Progressive Conservatives have gotten caught taking dozens of donations for the party war chest from municipalities, counties, learning institutions, government agencies and contractors, and the Treasury Branches. Some of this happened before Redford became premier, which is worth remembering as the party tries to pin everything on the discarded bad apple. None of the people who engineered those kickbacks showed any awareness that they were obviously wrong or even unlawful, which tells us just how long the PCs have been doing that sort of thing. Because disclosure laws have evolved, and Google exists, we find out about it now. (Not all of Redford’s problems over expenses were ferreted out by reporters following up tips with FOI filings: some came up simply because Alberta government expense disclosure is now public, online, and frequent.)

There is a strong case that the PCs need some time on the sideline as a matter of hygiene—that, irrespective of ideology, 43 consecutive years of majority government is as unhealthy as 43 consecutive days wearing the same underwear. But it is easy to forget that Albertans have good reasons for their apparently congenital reluctance to change. The province’s resource economy has been managed, to a degree few others can boast, for the benefit of what used to be called “the working class.” The market power of skilled and unskilled industrial labour is probably as enormous, here and now, as it has been anywhere in history.

And political power follows, if only because the trades are so large as a proportion of the populace in Alberta. If you need proof, just look at the virtually unified clamour against the federal government’s neutering of the Temporary Foreign Worker program. In Alberta, TFW is popular because it functions as a guarantee that oilpatch and construction workers will continue to enjoy cheap food, hospitality, daycare, and entertainment while their own wages skyrocket.

There is a little-noticed irony in the Canadian left’s contempt for Alberta: to a truly awesome degree, Alberta has, through managed capitalism, fulfilled the wildest dreams for industrial workers ever dreamed up by Marx and Lenin. This self-evidently has not much to do with labour unions. (What labour unions?) When Albertans talk about TFW, it is often observed that young people exiting high school here are not obligated to fill brainless service jobs, because it is so easy for them to go buy a pair of steel-toes and land a fairly enormous salary in a matter of hours. It is important that people outside Alberta understand: this is a complaint! It’s a common one!

Whether or not there is a lineup at the donut shop, it is a nice thing to live in a place with a chronically tight labour market—a place where the phrase “labour shortage” has not disappeared from the headlines since the 1980s. Alberta seems almost to be the lost Fifties high-growth world described longingly by analysts like Thomas Piketty, with the difference that resource extraction and processing is able to play the worker-empowering role once occupied by manufacturing. (Turning bitumen into a refinable oil product is hard to distinguish from primary manufacturing at all.)

This is an achievement of the Alberta Progressive Conservatives. Period. Most oil-exporting countries get ripped off by their political leadership and end up seeing little of the benefit. Our problems here revolve around crude-soaked ducks and threatened caribou habitats. Say what you want about Alison Redford: whatever she does next in life, one doubts it will involve taking a few hundred million purloined oilbux out of a Swiss bank account and buying an English soccer team with it.

Alberta—if we set aside the caretaker Hancock—has now had two disappointing Conservative premiers in a row. Despite the Wildrose Party’s high polling numbers, it may take more than two to finish off the PC winning streak. The Conservatives have already siphoned off massive amounts of hard-earned public goodwill. But no one individual really knows how much or how little they have left to exploit. It is an unmeasurable quantity, stored in the hearts of voters.

The best proxy for that quantity is probably the dollar—that is to say, party donations. As it happens, the troubled, ravaged Conservatives led the field in that department in the second quarter of 2014, though they were buoyed up by the leadership race, and in particular by Jim Prentice. To quote party president Jim McCormick: “These numbers help show the silliness of assertions by other parties for what they are—falsehoods.”

North Korean rhetoric aside, the numbers do suggest that Prentice has impressive fundraising power. But they also hint that the party really needs him to win the leadership contest, and it will certainly need him to govern as though the job is more than just a life detour or a lark. If, as some believe, he sees the premiership as a step toward leadership of the federal Conservatives, there is no telling how long he will stay, or how much he will concentrate on important election-winning details.

Such details were never the forte of the Joe Clark wing of the old federal PCs, in which Prentice and his prize articling student, A.M. Redford, were prominent figures. It is so easy to imagine things going very wrong for Alberta’s Natural Governing Party. On the other hand, nothing in the world is easier to imagine than business as usual. Especially if it’s been usual all your life.