The Legion tells neo-Nazis to get lost

An extremist group now seeking to register as a political party held a meeting at a Legion hall in Saskatchewan. It won't happen again, says the local executive director. 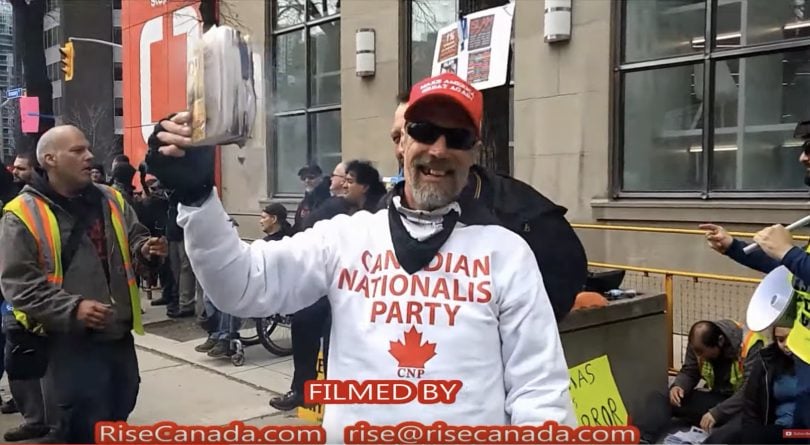 An extreme right political group whose supporters were involved in recent punch-ups at Toronto and Hamilton Pride events held its last meeting in a Legion hall, the Royal Canadian Legion said Wednesday.

The group held a meeting in the Redvers, Sask., branch earlier this month to announce an update on its efforts to register as a political party for the October election.

Party leader Travis Patron thanks the Legion at the beginning of a video uploaded to YouTube. “Welcome. Thank you for coming. And also thank you to the Legion who is hosting us here today.”

Chad Wagner, executive director for Saskatchewan Command of the Legion, said Wednesday that the local Legion branch didn’t realize what kind of group they were hosting and it won’t happen again. “We contacted the branch and put an end to it,” he said. “It violates our anti-hate policy. They simply just didn’t know who these guys were. When they found out, started listening to what these guys talk about, they didn’t want them there anymore.”

The legion implemented a new anti-hate policy earlier this month after the Soldiers of Odin held an April event at the Grande Prairie branch.

The Canadian Nationalist Party advocates for lower immigration levels and policies to favour Canadians who have been here for generations, which critics say is code for a neo-Nazi agenda. A video posted to YouTube in May shows a man wearing a Canadian Nationalist Party T-shirt and a red MAGA hat burning a Koran. It was posted by Rise Canada, an anti-Islamic group. In another recent video uploaded to YouTube, Patron speaks at length about “the parasitic tribe.”

“They certainly espouse neo-Nazi ideology. It is so obvious anti-semetic trope. It’s the exact type of thing that Hitler and his henchmen used in the late 30s when they tried to demonize Jews.”

Farber is unhappy that the party is on its way to becoming an official political party.

In the video, Patron says the party has almost collected the 250 names required to officially register and put candidates’ names on ballots.

“I can confirm that we received an application to register as a new party on April 17 from the Canadian Nationalist Party,” said Elections Canada spokeswoman Natasha Gauthier.

The group first applied last year but didn’t have enough names. Patron has expressed confidence that he will get enough names this time.Elections Canada says there is nothing in the act to prevent the registration of a party based on its ideology.

Farber says he would like to see the law changed to prevent anti-democratic parties from registering, as is the case in Germany, because of the tax advantages that official parties enjoy. Donors to political parties get tax credits of up to 75 per cent.

“This idea that they could become a political party is a horror story and it should put everybody in fear of the future,” he said.  “Why? Because they can now issue tax receipts. The state, our country, will be funding a white-supremecist, a neo-Nazi-enabling organization.”

On Tuesday, Patron complained about media coverage of his party’s involvement in violent incidents. “The people who run the media propaganda machine have a vested interest in seeing us fail. We will not, but rather expose them as the maggot infestation they represent. #CanadaFirst”