The little monks of Little Sands 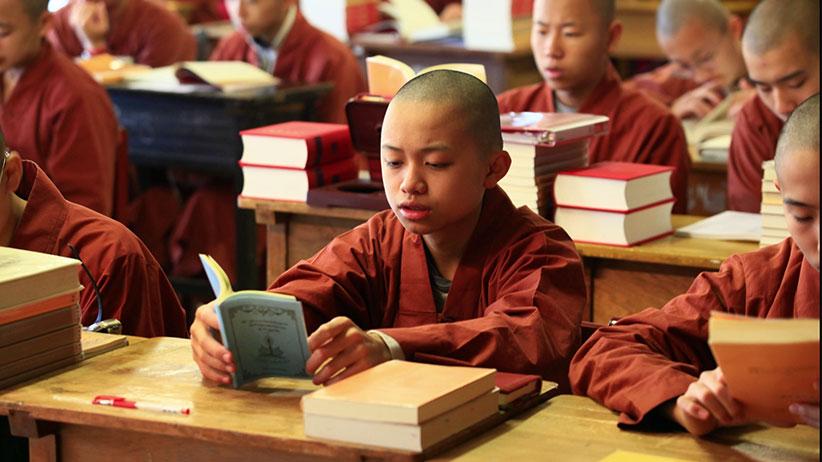 At 3:30 a.m. the school bell gongs. Robes donned, boys file into a prayer hall. They fold their socked feet onto cushions, chant Tibetan scripture and prostrate before a statue of Buddha. Their school is a monastery. Their curriculum is atypical for Prince Edward Island.

“This is a good starting point for life,” says Premier Wade MacLauchlan, who has visited Moonlight International Academy, part of a Buddhist monastery in Little Sands, P.E.I. “My main concern is that people are learning, working at it, are well in their skin and in their lives,” he says, “not that education is somehow a stamp we put on someone but a way we do our best.”

The academy brings children from Taiwan, Singapore, Malaysia and China to the home of Bud the Spud, now also home to 300 monks. The provincial government, eager for immigration, changed its education laws last year to allow children to train as monks, as well as Amish families to homeschool their children. The premier supports alternative curricula when it brings migrants, and most Islanders welcome the “come from away-ers.”

Master Zhen-Ru studied with sages in Tibet before searching the globe for a place to establish a monastery. In 2006, she registered a charity called the Great Enlightenment Buddhist Institute Society (GEBIS) in British Columbia, then tried Ontario before she decided her disciples’ red robes were best suited for P.E.I.

“‘How come you monks always look so happy?’ ” locals ask, says Venerable Dan, a monk at GEBIS. “If [the children’s] definition of happiness changes from ‘getting what I want’ to ‘helping others get what they want,’ ” he says, “it’s a win-win situation.” The province changed the Private Schools Act last year, allowing the academy to teach in Mandarin and Tibetan. The students’ parents are mainly Buddhists themselves, and they pay no tuition to send their sons to the monastery in Canada. Before committing, families usually visit the site, where boys study Confucius in kindergarten and Grade 1, a course called Guru’s Teachings 101.

The school strips away material temptations so the children can dedicate themselves to helping other living beings. After one rainfall, a boy patrolled the gravel roads with a tofu container, using a woodchip to move slugs to safer grass. The children eat plain meals so they don’t get attached to food, and they fashion toys from chopsticks and rubber bands. The playground has homemade slides, swings and a sandbox, where even the older monks occasionally play.

“The Mighty Island” is P.E.I.’s new slogan in its drive to grow its population, a rebranding from the old “Gentle Island.” The province tied with Alberta last year for immigration per capita—a critical feat given that the number of Islanders is expected to start naturally declining with more deaths than births in 2018 (the province also predicts a gender imbalance by 2055, with a deﬁcit of about 7,500 men).

“Mightiness” comes from away, as the province attracts international children and interprovincial families, like an Amish community from Ontario, which found cheaper land in the town of New Perth. The children are future taxpayers, and the new Private Schools Act exempts Amish students from standardized tests.

Premier MacLauchlan purchased cucumbers and potatoes from a nine-year-old Amish boy when he visited one family, and “he was running those numbers at a rate without the slightest hesitation,” says MacLauchlan. “I know we’re not going to have to build jails for the Amish kids.”

The Amish mean business for locals like veterinarian Kim MacDonald, as each family owns up to 12 horses that often need injections, teeth cleaning and new shoes. While she works, the children watch. “I know they’re very, very intelligent,” says MacDonald. The Amish pay for services with money, and package homemade butter to thank neighbours for favours such as lending them a machine to make hay bales. “It’s all working out for everyone,” MacLauchlan says.

But not everyone can get their private schools approved. Islander Julie Taylor wants to start a Waldorf Academy called Heartwood School in Summerside. She has expression-of-interest forms completed by 35 families, who will pay tuition of up to $7,000. But the Waldorf program calls for kindergarten classes to mix children aged three and a half to six, and the Private Schools Act stipulates that the three- and four-year-olds be in a separate daycare until they turn ﬁve.

“They’re really trying to make us compromise our pedagogy,” says Taylor. Her staff also can’t get their credentials recognized. One teacher taught daycare in New Brunswick for four years, but the Island demands she do a two-year college course to re-qualify in P.E.I. Taylor has teachers applying from Australia and Thailand, but the provincial government won’t let them teach without local training. “We were told the framework is rigid,” says Taylor.

In kindergarten at Moonlight International Academy, students learn the stages of the path to enlightenment. They currently do not learn English, but the academy may introduce the language in coming years. “Being in P.E.I., English is a must,” says Venerable Dan.

In monastic life, the children also learn must-nots. Monkhood demands celibacy, and they learn sexual education around Grade 8 through health classes and informal conversations with elders. “To train our mind to do what we want, we have to physically restrain ourselves from certain things,” says Venerable Dan. “If you’re attached to chocolate, it’s a good idea to stay away from a candy store for a while so you can control yourself.” Regardless of curriculum, children seem to somehow absorb popular culture. When MacLauchlan visited Moonlight, he says, “you have all the impression of going to a community that is living off the grid, or in its own kind of universe apart.” But one of his ministers walked across campus with a young monk in training, who held an umbrella for him. The boy examined the minister’s face and said, “Has anyone ever told you you look like George Clooney?”