Al-Shabaab and the lure of West Edmonton Mall 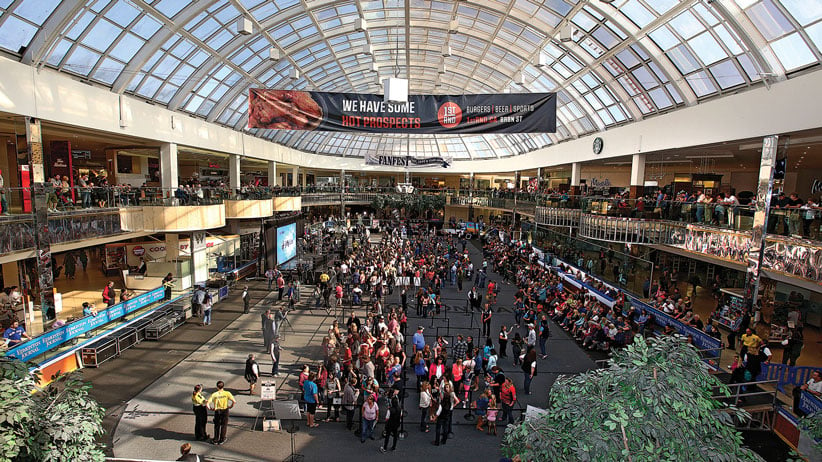 Listen to Colby Cosh read his column, or subscribe to Maclean’s Voices for on-the-go listening:

When I was a young man, there were two things you would expect people to mention when you were travelling abroad and you told people you were from Edmonton: the glorious Stanley Cup-winning Edmonton Oilers and West Edmonton Mall. Nowadays, of course, everything’s totally different. Now when you travel and mention Edmonton, you expect to hear about the comically rancid Edmonton Oilers and West Edmonton Mall.

WEM was named in a video released on Feb. 23 by the struggling Somali terror group al-Shabaab, which has an unstable affiliation with al-Qaeda. The group is best known for masterminding the September 2013 four-man swarm attack on the Westgate Mall in Nairobi, Kenya. Those killers took at least 63 lives, including those of two Canadians. The new video suggests, rather in the manner of mafiosi, that the Westgate attack could be reproduced at Western megamalls like WEM and the Mall of America—both of which are owned by Edmonton’s Ghermezian family, and both of which are in communities that have attracted significant numbers of Somali refugees.

This last part is probably not a coincidence. Big shopping malls and refugees are attracted to a place by some of the same factors. If you have to flee your home and start over in a new language, with your credentials almost irretrievably left behind, you’re looking for a resource-extraction economy that’s slightly inhospitable—a place with structurally tight labour markets that will reward the will to work hard with a high disposable income—i.e., the kind of income people will spend in a nice, cozy, winter-proof megamall.

Related reading: Scott Gilmore: How to end the fear economy

I have worried a little about the mall—if you’re from Edmonton, that’s all you need to say to specify it—during the period of trendy freelance Muslim terror. Naturally, I wouldn’t let this stop me from visiting the mall with the usual frequency. Which, meaning no disrespect, is darn near never. Like a lot of people from the Edmonton suburbs, I got my fill of it, and then some, in adolescence. But nobody should be afraid to visit: You are surely taking a bigger risk using a stepladder to change a light bulb.

Al-Shabaab destroyed the Westgate Mall, which suffered a structural collapse after the attack, by dispatching four trained killers on a suicide mission in a neighbouring country where policing is (and, when tested, turned out to be) none too professional. West Ed, which has the security establishment of a city unto itself and which has prepared specifically for a terror scenario, would be a much tougher nut to crack.

The likelihood is that al-Shabaab has no intention of recruiting and planning an attack. They just want the message—create chaos in a public place, preferably owned by Jews, that represents orgiastic Western commercialism—to reach one lost soul, some Michael Zehaf-Bibeau-type loser who is experimenting with anti-modern radicalism while experiencing other life problems. The receiver of the message would not have to be a Somali-Canadian, but no one here—certainly not the Somalis themselves—is unaware that the Alberta Somali community does have an astonishing, hard-to-explain record of (non-religious) violence.

But there are idiots of all races ready to blame their difficulties with women or education or drugs on a fallen world. And in Edmonton, if you were a kook searching for a high-profile terror target full of innocents, you would hardly need al-Shabaab to pick a target for you.

WEM looms over Edmontonians, psychologically and literally. Even those of us who hardly visit what was once the world’s largest mall can pinpoint dates in our lives according to the various additions and subtractions from it. (Although, upon checking the map, I discover that the arcade of my youth, having gone through a number of evolutions, is miraculously an arcade again.)

Lots of us regard WEM as a monstrosity. The sort of person who thinks of himself as an “urbanist,” and we have some, could hardly be expected to love a place that may still claim the “world’s largest parking lot” title. But even the most Edmonton-hating Edmontonian would feel a special grief if someone attacked the mall as such.

The math on that, unfortunately, has a disturbing multiplicative character. If the chances of terrorism in locale X are just five per cent in a given year, the overall chances of at least one attack pass 50-50 in Year 13. If you start the chances at 20 per cent a year and optimistically reduce them by five per cent each year after, you’re still slightly above 50-50 overall. Any sensible model I can think of tells me that some sort of attention-getting tragedy is not improbable. I only hope that, if it happens, it is brief and inept.