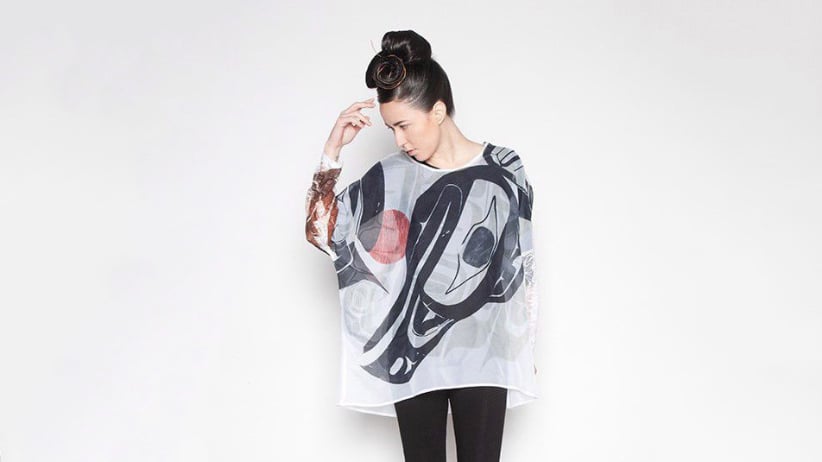 Joleen Mitton. Organizers of Vancouver’s first indigenous-focused fashion week say the event will celebrate “cultural appreciation” for designers and creators who are used to seeing their work appropriated by others. (Photograph by Angela Fama)

Next month, Vancouver will host its first Indigenous Fashion Week  featuring 32 Canadian designers, almost all of them Indigenous—as well as Indigenous artists and performers. Anne Kingston spoke with its founder Joleen Mitton, a former model of Plains Cree, French and Scottish heritage who currently works with disenfranchised youth in Vancouver.

Q: You worked in fashion for more than a decade as a model—with brands like Lancome, Clinique, and Vivienne Westwood. Was there a signal moment for you seeing Indigenous symbolism and culture being ripped off ?

A: I was so young and working overseas.  I didn’t appreciate it at the time. I had to look through my book. I’d done shoots in Taiwan and dreamcatchers were part of the imagery—I was even wearing them. I was 15.  It is influriating; there’s cultural meaning to objects. Now you can go to Dollar Store and buy one.

Q:  There’s a history of  Indigenous appropriation in Canadian fashion. In 2009, Hudson’s Bay Co. proposed knock-off versions of Cowichan sweaters as part of its Olympics gear. Two years ago, the Canadian designers behind DSquared2 showed a “.dsquaw” collection. After, they went on to dress Beyoncé for her “Formation tour” and the designers and the Hudson’s Bay Co. hired the line to design Team Canada gear for the Rio Summer Olympics.

A: The States is different than Vancouver. I don’t see that happening here; if it did, my community would be all over it. ReMatriate, founded by my good friend Kelly Edzerza-Bapty, is a response to stuff like that.

Q: What prompted you to organize an Indigenous fashion week?

A: I wasn’t looking to stay in the industry. I came back [to Canada] in 2008 and said  “I’m never going back.”  I started working with Indigenous kids in foster care. It was an eye-opener. They were dying their hair blonde and the people they looked up to included Miley Cyrus. They were not into their own culture. We were trying to teach them how to bead; they wanted to twerk.

I was working with girls groups aged 8-14 and  14-25.  And the girls were awesome. But we had some deaths in the program and it had to do with identity issues and not being proud of who they are. My kids get bullied at school for being Indigenous. We were teaching them how to use a slow cooker and write resumes—to help them get going in the world. Often, if they’re in foster homes they’re not living with Indigenous people so we try to help them know who they are, to try to teach Indigenous practices like beading or crafts. We wanted to have them look up to imagery of Cowichan sweater and Mukluks—to derive status from that.

I was talking to one kid and said ‘I modeled in Asia’ and she said ‘No!’. So I brought my book and the response was amazing. I was having trouble keeping older girls in the group, there were interested in boys and experimenting with drinking. I couldn’t keep them with a crockpot. So I started doing beauty nights and fashion shows with Indigenous fashion so they can walk with pride knowing they come from a beautiful culture.

I’d ask kids who their heroes are, and no one was an Indigenous person. They only know what they’re shown. Buffy St. Marie was a huge inspiration to a lot of people but this is a different generation. A lot of people are coming up. Giving them the visibility—this is what’s happening, this is what you can wear, this is who is doing stuff—is really positive.  This came from that. Not having them fall between cracks is the main goal.

Q: How long have you been planning?

A: Six or seven years. At first I wanted a magazine, but that was too much work.

Q: Mass retailers like H&M and Urban Outfitters are currently cashing in on derivative Native design, but we don’t know about Indigenous designers in Canada. Why?

A: Canada wasn’t ready. Canada is a young country—a melting pot.  Now people are looking for a way out of this individualism and corporate work and go go go. A lot of people are turning to Indigenous peoples for more sustainable ways of living.

Q: The fashion week’s publicity refers to an “Indigenous aesthetic.” What does that mean?

A: Clothing is such a mass produced thing, with such a huge carbon imprint. You can go to a store like Forever 21 and buy a shirt with a Navajo design on it—then you discard it when it’s washed out. If something is by grandmother or auntie and it’s passed through your family—it’s a slow fashion versus fast fashion. Indigenous fashion has spirit attached to it. It’s not—”This is a new season, this fur is in right now.” I can see how people exotic-fy it because it’s so beautiful.

Q: All of the models will be First Nation, Métis, Inuit and include former foster children.

A: We’ll have some non-Indigenous people for inclusivity, but 98 per cent will be Indigenous. Some will be girls aging out of foster care, some still in foster care. But I won’t put people on the runway younger than 16. I was 15 and pushed out—doing lingerie ads. I won’t do that to any other teenager. Peer-mentoring is how kids learn, so we have Indigenous models who are more established.

Q: We’re in the midst of recently-ignited heated debate over cultural appropriation in Canada. Has that affected the reception of  the Fashion Week?

A: The thing about cultural appropriation is you need permission.  The general public has to learn cultural competency.

Q: Could you explain “cultural competency”?

A: A lot of people don’t know there’s protocol with Indigenous people—respect and asking permission. Magazines especially—they’ll say ‘This sounds amazing, let’s talk about this.” Some things are not up for public consumption. If you’re coming from a reserve and going to be part of fashion week, you’re not bringing your sacred items for public consumption. Those things stay in your reservation or your territory; there’s energy attached to these things.

A: Building up Indigenous enterprise is important to me. I’d like Vancouver to have more of an Indigenous identity. It’s already visible here; you go to Toronto and it’s not very visible. But it could be more. We need to stand up and honour relationships and Indigenous design.

It’s been 150 years of colonization. What’s funny to me is how many people buy the Buddha icon. Buddhism is awesome. But we have a natural system here; it’s not the same as Buddhism—but tranquilly, respect, those things also exist in Indigenous ways of being. You don’t have to look very far. So smarten up Canada.

This interview has been edited for clarity and brevity.

Correction: This post has been updated to reflect that this is the first Indigenous Fashion Week to be held in Vancouver.