The migrant surge on the border isn't a crisis, it's just a fiasco 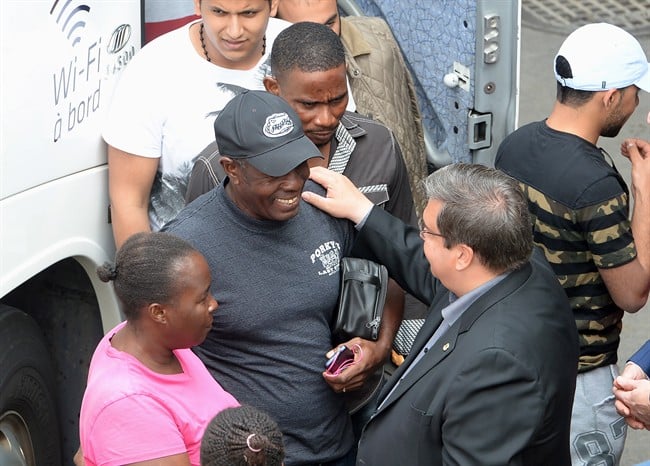 Everybody stay calm, everything’s under control.

As Canadian Forces teams were busy building a tent village last week to accommodate a surge of mostly Haitian asylum claimants crossing the border from upstate New York into Quebec near Saint-Bernard-de-Lacolle, that’s what we were still being told by Prime Minister Justin Trudeau, Immigration Minister Ahmed Hussen and Quebec Premier Premier Philippe Couillard. Relax. We can handle it.

Of course we can handle it. Even if each of the 60,000 Haitians in the United States who are currently counting down the days to their deportation orders decides to head north and walk across the porous Canadian border into Quebec, we would be able to handle it. Canada’s shambolic immigration and refugee system, with all its false boasts of orderly righteousness and its make-believe coherence, will continue to trundle along in its mostly unintelligible, sometimes brazenly corrupt and ordinarily nonsensical fashion.

So yes, stay calm. The Quebec asylum-seeker surge is not yet even close to a crisis. It’s just a fiasco. It’s business as usual. And everything is definitely not under control.

The northbound Haitians are not mysteriously unaware that two years ago, Canada ended the same temporary status that the United States offered Haitians following their country’s devastating 2010 earthquake—a status the Trump administration is now determined to replace with deportation orders by January. Neither are all those Haitians arriving in droves on the Quebec border weirdly possessed of the notion that they will all qualify for refugee status in Canada. They won’t. Earthquakes don’t count, and the Haitian government insists that the emergency is passed.

We should all stop kidding ourselves, and Trudeau, Hussen, Couillard and the rest should stop trying to kid us.

The system that’s supposed to regulate asylum claims at Canada’s entry ports is broken. The 2004 Safe Third Country Agreement was supposed to prevent cross-border “asylum shopping.” It was intended to discourage asylum-seekers in the United States from trying their luck in Canada and vice-versa, but because unofficial border crossings weren’t taken into account, the agreement has ended up working as a border-hopping incentive.

Immigration lawyers and politicians from former Conservative immigration minister Chris Alexander to Parti Quebecois leader Jean-François Lisée say the agreement should be suspended. That might stop would-be asylum claimants from jumping the border as a first option. But if they’re determined to try their luck in Canada and they’re turned back at official ports of entry, why wouldn’t they just try sneaking in again?

An internal government analysis obtained by the Canadian Press in June reckons that if the rate of asylum claimants showing up in Canada continues to climb, it will take 11 years for the Immigration Review Board to adjudicate a claim filed this year. That’s de facto citizenship—or at least it should be. If the rate levels off and ends up at only 28,000 claims for all of 2017, it would still take at least four years before a claimant this year gets a hearing. Hussen’s announcement that he’s adding a few extra staff to “process” applications won’t change that.

Between January and April this year, the RCMP intercepted at least 2,700 people entering Canada from the United States at irregular border crossings from British Columbia to the Maritimes. By July 1, that figure had jumped to 4,345. But by then, the claims processed by the Canadian Border Security Agency and the “inland” offices of Immigration, Refugees and Citizenship Canada had reached 18,305. And then last month, the traffic in asylum-claimants crossing the border into Quebec took a sharp turn upwards, from 245 claimants intercepted by the Mounties near Saint-Bernard-de-Lacolle in January to nearly 1,200 in July.

By the first week of August, it was up to 150 a day. By the end of last week, it was approaching 300 a day. At this rate, asylum claims will easily surpass 28,000 this year, and that’s without taking into account what will happen when the clock eventually runs out on another 300,000 temporary U.S. permit-holders from a dozen other countries, including El Salvador, Nicaragua, South Sudan and Yemen.

If past practice is anything to go by, Canada’s citizenship, immigration and refugee bureaucracy will be given temporary resources and time-limited marching orders and there may even be the unveiling of some new program, but we’ll end up stuck with the same fiasco by another name or in another guise. It’s just the way Canada deals with these things.

Bending to an outpouring of popular outrage, Canada quite properly welcomed close to 40,000 Syrian refugees by last Christmas, but then quietly slammed the door on further private sponsorships, leaving 25,000 Syrian refugees in a private resettlement application backlog in 2017.

As for Quebec, it takes quite a bit of gall for Couillard to hector anyone about matters of principle on the immigration file.

By the time the former Conservative government shut down the scandalous cash-for-citizenship Immigrant Investor Program in 2014, so much Chinese money had been sunk into Metro Vancouver real estate that Demographia International ranked Vancouver second to last out of 378 cities on its Housing Affordability Survey. Citizenship and Immigration data showed that refugees had reported higher earnings and contributed more in tax revenue to the federal treasury than all those immigrant investors, over the life of the program.

Seeing the lucrative returns involved, Quebec ramped up its own annual immigrant-investor racket to supplant the federal program, so now we’re back to square one. By last year, roughly 5,000 mostly Chinese multimillionaires each lent the Quebec government $800,000 interest-free over five years for the privilege of getting back on a plane, flying to Vancouver, and pouring more money into real estate. Peter Routledge, formerly of National Bank Financial and now an adviser to the federal finance department, reckons that in 2015 alone, $13 billion in Chinese money was sunk into Vancouver’s hopelessly overheated real estate market.

Now, Ottawa is getting back in on the action, doling out roughly 800,000 10-year, multiple-entry visas to the Chinese business class over the past two years. Bonus to big-money players: unlike the pathway-to-citizenship rules that govern permanent resident status, multiple-entry visa holders don’t have to meet residency requirements or declare their foreign assets to the Canada Revenue Agency.

Then there was the similarly scandal-wracked Temporary Foreign Workers Program, which was so disfigured by the abuse and exploitation of migrant workers that it had started to operate like a federally-regulated human trafficking operation. The program was scaled back and radically restructured three years ago, and only 90,000 migrant workers were employed via the program in2015. But the more benign-sounding International Mobility Program is picking up where the TFW left off. The number of IMP guest workers has skyrocketed from fewer than 100,000 to 260,000 in 2015.

So yes, do please refrain from setting your hair on fire about a few thousand Haitians who may or may not end up with temporary or permanent status or even citizenship. But don’t kid yourself. Canada’s immigration, citizenship and refugee incoherence is not going to be fixed with a few army tents on the border near Saint-Bernard-de-Lacolle.