The most Canadian cross-country road trip 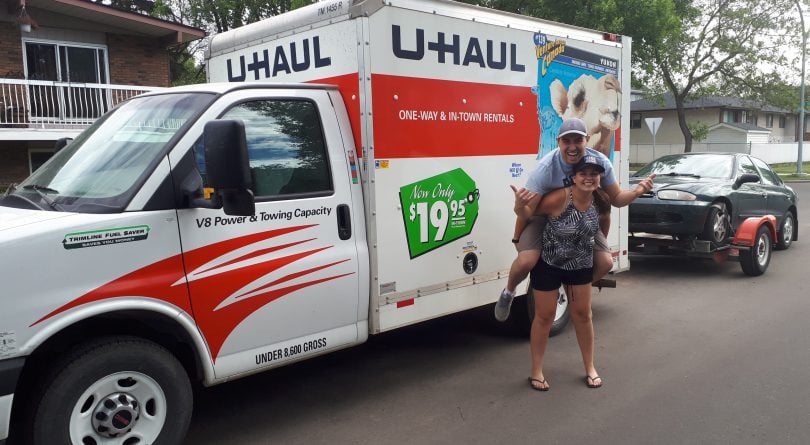 Christy and Jeff pose in front of their Uhaul before leaving Edmonton. (Christy Hawley)

Christy Hawley and her boyfriend, Jeffrey Côté, had two full days of driving behind them when they pulled over in tiny Upsala, Ont., and got out of their U-Haul truck to get a closer look at a hand-painted sign as tall as Christy. It was June 28, and they were just 140 km from their new home in Thunder Bay, Ont., where Jeff, 22, would work on a civil engineering degree at Lakehead University and Christy, 23, planned to look for a nursing job.

Behind the couple, 1,900 km away, was the Edmonton apartment they’d just left, and south of that, their hometown of Sparwood, B.C., and their families. But here, in a little spit of a park on the side of the highway in a town they’d never seen before, was a white cardboard sign emblazoned with foot-high bright-blue letters that read, “CHRISTY AND JEFF CALL YOUR MOM.” A stranger had painted it and placed it there, slightly cockeyed, on a little stand for them to see.

Another stranger was standing in the parking lot nearby. “Is that sign for you?” he called out. “Yeah, it’s for us,” Christy and Jeff confirmed, as though they were obscure celebrities who had just somehow appeared in a 300-person town in northwestern Ontario. “Wow, that’s cool,” the man said. Then he added, “You better call your mom!” 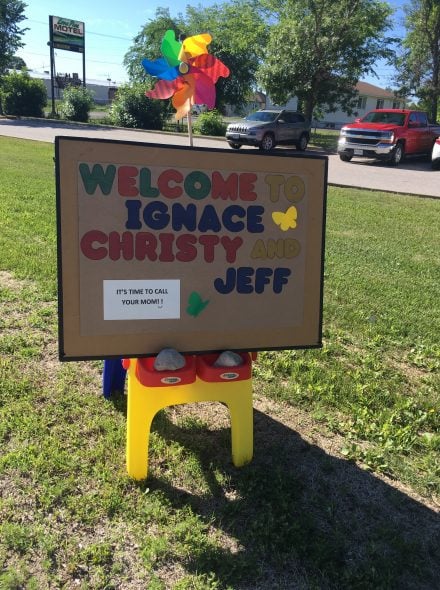 Tina Richards from Ignace, Ontario, created one of the signs posted along the highway for Suzanne’s daughter. (Tina Richards)

The whole thing had started a week and a half earlier. They’d gone to visit their families in Sparwood after Christy finished her nursing diploma at NorQuest College in the Alberta capital, but it was time to head back to Edmonton, where they’d been for four years, to pack up for their big move. They said goodbye to Jeff’s mom, Marcela Conejeros, at a farmers’ market, and when she welled up, Christy protested, “Stop crying! It’s not supposed to be sad.” Conejeros insisted she wasn’t sad—just proud to see them venturing so far on their own.

Christy needed to focus on the good stuff rather than the melancholy, so she arranged things in her mind like this: Yes, they were moving three provinces away and would need a flight rather than a six-hour drive to return home, but they would visit just as much as they always had, half a dozen times a year. But when it came time to say goodbye to her mom and dad, Suzanne and Jeff Hawley, Christy concedes, in a tiny voice made of glass, “It was sad.”

Asked about her feelings on her middle child moving across the country, Suzanne at first offers a slow “Hmmm,” giving herself a moment to reach for composure. Then her voice shrinks into the same high, fragile register as Christy’s: “I’m pretty sad,” she says. “I’m hoping they come back. But at this point, I don’t know.” So after saying goodbye at the end of the driveway, she started casting about for what she could do about all this. What surfaced in her brain was a sort of cross-country lunchbox note from Mom.

Suzanne began with the biggest communities along the Trans-Canada Highway route her daughter and Jeff would drive. But she soon realized that in larger centres like Saskatoon, logistics made her plan all but impossible because there were fences or other obstacles that would prevent any willing accomplice from directly accessing the roadside. So she shifted to looking for much smaller communities, poring over maps to figure out which places were on the correct side of the divided highway.

First, Suzanne sent messages to random people on Facebook who seemed to live in the right areas. But none of those messages got much response. “Okay, I’m going to have to call people and tell them my story,” she decided.

A lot of the calls went the same way. Someone would answer the phone brusquely, and Suzanne would wilt a little, thinking, “Uh-oh.” But she’d press on, introducing herself and explaining she had a “strange question” to ask: Would they be willing to scrawl out a sign that said something like “Christy and Jeff, call your mom” and place it along the highway to welcome her daughter and the boyfriend who was part of the family, too?

Usually, once Suzanne explained what she was trying to do, the stranger on the phone would laugh and say, “Yeah, I can do that.”

She tried churches, municipal offices and private businesses, but visitor information centres were most willing to play along. In Ignace, Ont., the public library agreed to help. People in northwestern Ontario were the best. “None of them even questioned it,” Suzanne says. 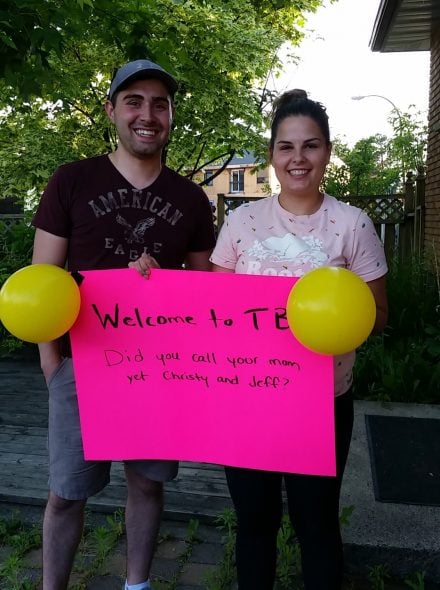 Christy and Jeff pose with the Welcome to Thunder Bay sign. (Janet Begin)

When she needed a willing sign-maker for the final leg of the journey, she searched Facebook for community groups connected to Upsala. She found one where a woman named Gaye Beebe had posted about a park playgroup; she seemed like the kind of person who might help, so Suzanne sent her a message. At first, she heard nothing back, so by way of “tugging on her heartstrings,” Suzanne sent a photo of her three kids—Christy, Allyson, 27, and Curtis, 20.

Finally, Beebe saw it. “I exclaimed to my husband, ‘Oh wow, I just got this strange message,’ ” she says. “But I thought it was kind of cool.” Beebe has three grown children, one in Thunder Bay and two living in the U.S., and five grandchildren. So she borrowed a stand from a friend and painted the requested message on a piece of cardboard to help a mom she’d never met on the other side of the country. “I know what it means to miss your children,” she says.

Meanwhile, from the time Christy and Jeff left Sparwood, Suzanne seemed to be peppering them with a bizarre number of very specific questions about the trip, but Christy didn’t really think much of it. The one incident that did seem odd was when her mom texted to ask where they would stay overnight, and Christy said she’d reserved a room at the Days Inn in Portage La Prairie, Man. Suzanne mixed up the hotel chains and called Christy “freaking out” because there was no Holiday Inn there. 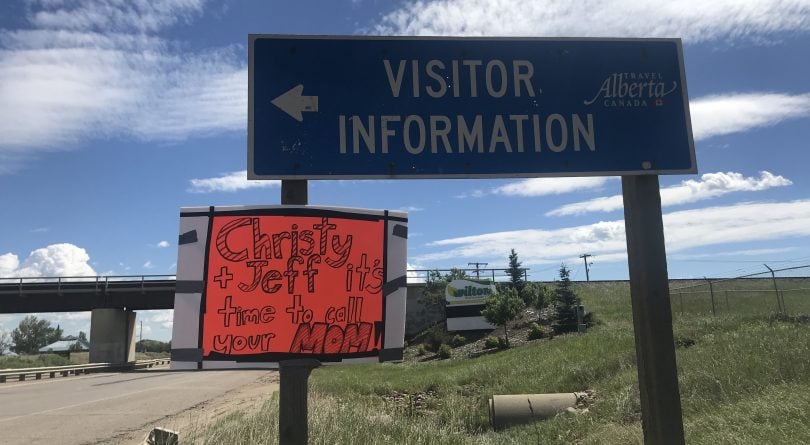 The day they were leaving, Suzanne texted to say that something cool was happening at the visitor information centre in Lloydminster, on the border of Alberta and Saskatchewan. “We were like, ‘Okay, cool. We don’t plan to stop there. But okay, Mom,’ ” Christy recalls. A mom’s gonna mom—what are you going to do?

Indeed, the official blue “Visitor Information” highway sign had acquired a handwritten, neon-orange addition. A gas station somewhere in Saskatchewan posted a note on their bulletin board next to a tiny Canadian flag, and right below the “Come in, we’re open” sign on a Manitoba-Ontario visitor information centre, a computer-printed sign was waiting to remind the couple to call Mom.

When they reached Portage La Prairie and checked into their hotel at 2 a.m., the woman at the front desk glanced at their file then passed over a scrawled note: “Christy & Jeff, it’s time to call your mom. Front desk, Rm 125.” Suddenly, Suzanne’s fretting about the hotel made sense. 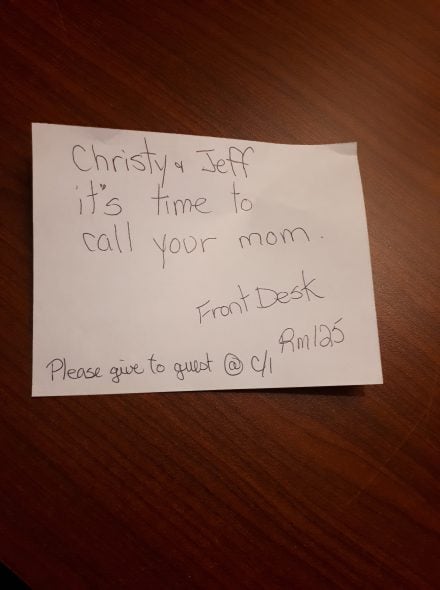 A sign left for Christy and Jeff at the Days Inn in Portage la Prairie, MB. (Christy Hawley)

In Ignace, the sign the library put out looked like it had been crafted by a conscientious kindergarten teacher for the first day of school: colourful, perfectly stencilled letters beckoned in welcome, with the whole thing propped on a child’s easel and topped by a pinwheel. In Dryden, Ont., what the scrawled sign lacked in commitment to artistry it made up for in size, dwarfing the picnic table it leaned against.

But as the couple passed through Dryden, Christy happened to remember that the town had a paper mill that smelled terrible, so she was googling for information about that and looking down at her phone. “A huge sign there, I can’t believe we missed it,” she groans. Once Suzanne’s scheme had become obvious, as they drove, she kept checking in with them: Did you notice anything here? What about this place? Whenever they missed seeing a sign in person, she would text them a photo sent along by one of her co-conspirators. The reminders to call home were mostly an academic exercise, because Christy and her mom were in constant contact anyway.

Suzanne knows quite clearly why she makes grand gestures like this: there used to be eight grandchildren on her side of the family, and now there are five. After losing two nephews and a niece, she’s not about to let moments pass quietly when they could be celebrated. “It’s because I don’t want to let anything go,” she says. “I want everything to be a big deal now.”

In the end, there were signs waiting for Christy and Jeff in nine places stretching across three provinces; they would only end up seeing a handful of them in person because of weird distractions and near-misses. But that didn’t matter so much. “She was sad when she left, so I just thought, ‘I just want to make this a little bit more interesting, a little bit brighter, a little silly,’ ” says Suzanne. “I didn’t want the trip to be sad, I wanted it to be happy for her.” And did she succeed? “She definitely did, yeah,” Christy says.

That trail of signs crafted by strangers and coaxed into being by a mother’s long-distance love escorted Christy and Jeff from Edmonton to their new home, where so far they feel like they’re on holiday, and there’s so much ahead to be excited about. But, of course, a cross-country trail of breadcrumbs like that runs in both directions: it also points the way back home.