The NACI problem and how to fix it

The volunteer panel is dispensing crucial vaccine advice meant to keep Canadians safe and healthy. But NACI desperately needs to do better on the national stage. 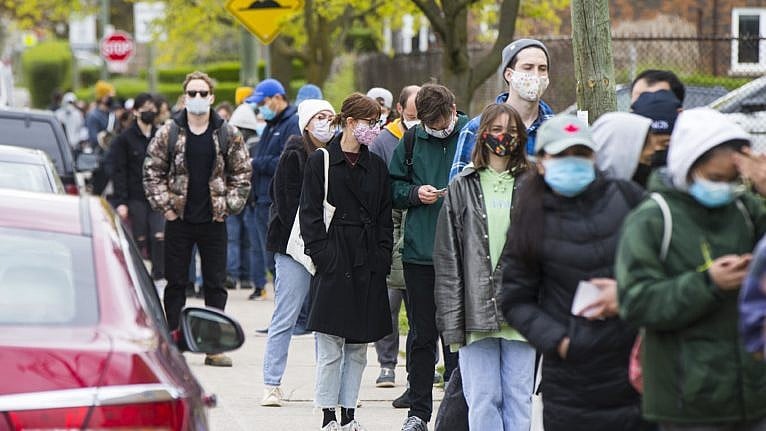 People wearing face masks line up to enter a COVID-19 vaccination clinic in Toronto on May 5, 2021. (Zou Zheng/Xinhua via ZUMA Press)

Monika Naus once spent an entire summer vacation reading through a final draft of the Canadian Immunization Guide. Back then, Naus was chair of the National Advisory Committee on Immunization (NACI), a panel of doctors and scientists that offers recommendations on vaccine usage to a constellation of health-care providers across Canada. Naus’s workload could be daunting, in part because the committee had little administrative support. Still, she volunteered her time for more than a decade and chaired NACI from 2003 to 2007.

The committee has studied new and emerging vaccines for more than 50 years. The panel first met in October 1964 in the aftermath of the first polio vaccine’s rollout, when only a handful of shots—smallpox, diphtheria, tetanus, measles—were commonplace. The first chair was Andrew Rhodes. Naus, who’s now medical director of the Communicable Diseases & Immunization Service at the B.C. Centre for Disease Control, was the seventh. Neither guided the committee through a coronavirus pandemic. That task has fallen on Caroline Quach-Thanh, a physician and scientist who specializes in pediatric infectious diseases and medical microbiology.

Quach took on the role in 2017, when the low-profile panel only met a few times a year for in-person meetings and divided into working groups that met on a monthly basis. The panel’s purpose was narrow. The Public Health Agency of Canada describes NACI’s basic job as “providing information needed by both public health decision-makers and health care providers in their respective decision-making processes.” NACI never wrote for a general audience, and its deadlines were rarely urgent. But when COVID-19 vaccines started to show promise, the committee’s work ramped up.

When the regulators at Health Canada started approving the first shots in late 2020, NACI started meeting more frequently, often weekly, and published rapid-fire recommendations. Before long, Quach and Shelley Deeks, her vice-chair, were holding technical briefings for journalists that were broadcast to a national audience—an attempt, says PHAC, to embrace transparency meant to bolster trust. Quach was in high demand and started racking up media appearances. As NACI’s profile grew, Canadians who wanted the safest and most effective shot anxiously looked to the suddenly prominent committee for clear, unambiguous advice.

But NACI’s mission was never to offer bespoke recommendations, and its guidance is typically written in technical terms that only a trained audience of doctors and health professionals can understand. “I think a lot of people are confused about who NACI is,” says Sabina Vohra-Miller, a clinical pharmacologist and co-founder of the South Asian Health Network. “They’re not really a public-facing body, but they’ve taken on a more public-facing role during the pandemic.”

The committee wrote as early as March 1 that mRNA vaccines—Pfizer and Moderna’s shots—were “preferable” to AstraZeneca, which hundreds of thousands of Canadians, including Prime Minister Justin Trudeau and every major opposition leader, were lining up to receive. The conventional wisdom was that any Health Canada-approved shot was safe.

When scientists confirmed that AstraZeneca’s vaccine posed a rare, but heightened risk of serious blood clots known as vaccine-induced thrombotic thrombocytopenia, NACI incorporated complex risk-benefit calculations into its advice on how and when that shot should be administered.

Trudeau and a small army of health experts, doctors and epidemiologists had repeatedly urged every Canadian to take the first on offer. But NACI’s more nuanced view, which encouraged mRNA vaccines when their supply was plentiful, was never quite that simple. Eventually, someone was going to ask about the apparent conflict between the popular advice and Quach’s recommendations. And NACI was going to have to have an answer.

On April 23, Quach and Deeks held a briefing and summed up their findings on AstraZeneca’s risks and benefits. “Our analysis provides a framework that can be used by provinces and territories to assess the benefit-risk scenarios relevant to their circumstances,” said Deeks. “The public health benefit-risk analysis for the use of AstraZeneca vaccine may vary between jurisdictions depending on their local epidemiology, their local vaccine supply and logistics and equity and accessibility considerations.”

In other words, any one individual’s decision to take a dose of the shot should be based on a wide variety of factors.

That briefing, held on a Friday, drew little attention. But on May 3, when NACI reiterated similar concerns in the context of the single-shot Johnson & Johnson vaccine—another jab that caused rare cases of serious blood clots—everything went off the rails. In a disastrous interview on CTV News, Quach said she wasn’t sure she would be able to live with herself if she advised her sister to take the AstraZeneca shot and it ended up causing her death. Was Quach saying the shot was unsafe? Thousands of people wondered if they’d been duped into risking their lives with a second-class shot.

Suddenly, NACI wasn’t feeding into the news. NACI was the news.

Menaka Pai, a hematologist and thrombosis physician in Hamilton, Ont., specializes in both blood clots and clinical guideline methodology. Pai personally witnessed the consequences of NACI’s poor public showing. She says patients who’d received a dose of AstraZeneca came to her with anxiety, fear and even terror after they watched the news. “It’s hard for them to verbalize who they were misled by, but they felt misled,” she says.

“I’m stressed and annoyed because medicine is really complex. I believe in the importance of nuance, and every time I see the latest sound bite, my heart just sinks,” says Pai. “My patients have read a tweet, or a headline, and they’re scared. What they really need is a little bit of time with someone they trust.”

For many people, a conversation with a family doctor would suffice. In a fiery question period the day after NACI’s briefing, Health Minister Patty Hajdu suggested just that kind of conversation. But could she fault anyone who didn’t have a doctor for looking to other voices?

Vohra-Miller says Canada has no single, authoritative source that translates evolving science on vaccines to the general public. “We don’t have a body that gives clear, transparent information to the public in a way that builds confidence,” says Vohra-Miller. “We just simply are not good at it. NACI sort of filled that gap, but their communications have clearly left a lot to be desired.”

Maybe nobody should have expected a group of volunteers, already working at breakneck speed, to find more time to master the art of communication. NACI leans on a secretariat of public servants at PHAC for administrative support, but the health minister’s office keeps its distance. “Right now, the pace is fast and furious because the work is obsolete almost the day that the statements come out,” says Naus, the former chair. “They’re under intense pressure to make decisions quickly, and that’s not the way scientific review processes work.”

NACI’s technical reports on vaccine safety are “incredible” and “transparent,” says Vohra-Miller. Pai calls the conclusions “stable and correct.” Maria Sundaram, an infectious disease epidemiologist and post-doctoral fellow at the University of Toronto’s Centre for Vaccine Preventable Diseases, says a major challenge for anyone counselling patients about AstraZeneca’s shot is that the choice simply won’t be easy for many people. “We might want to view this as taking a risk versus not taking a risk, when in reality we’re choosing between two competing risks,” she says.

Most of that nuance was lost in the noise, says Vohra-Miller. “NACI is trying to be transparent and empower people, but their strategies are backfiring,” she says. “They need to hire a comms person who can break this down into language that is clear, concise and easy to understand.”

The committee might look to Ontario’s COVID-19 Science Table for inspiration. Pai, recruited to that sprawling group of advisers in January thanks to her expertise in crafting guidelines, says they tapped behavioural scientists and a former journalist, Rob Steiner, to translate technical jargon for a broader audience. Every brief includes a lay statement built for public consumption. NACI needs to know its audience, which has expanded dramatically, she says. “People will be parsing your words—everyday people who are so exhausted, their nerves are already shot,” says Pai. “We have to be extremely centred on the needs of those people.”

She believes the onus is on everybody with a stake in public communication—”and I’m also including all the Twitterati, all of the doctors who have achieved quite a high level of fame and trust”—to think carefully about the power of their words.

Two days after Quach’s interview on CTV, the NACI chair shut the door on media appearances. She and Deeks, the vice-chair, were unavailable for an interview with Maclean’s. But Quach scrambled to circulate a statement to journalists that attempted to clarify NACI’s use of the word “preferred” in reference to mRNA vaccines. “People seem to think that it means that if they received the AstraZeneca vaccine, they got a second-best shot,” she wrote. “This preferential recommendation is for those not yet vaccinated.”

Her revised message: Don’t regret the AstraZeneca shot, but unvaccinated Canadians should prioritize another if they can afford to wait—and always keep in mind that science will continue to evolve as researchers learn more about the safety of every vaccine.

A week after Quach’s missive, several provinces dramatically shifted their rollout plans. They decided to stop administering AstraZeneca’s vaccine as a first dose, citing the blood clot risk and an expected flood of mRNA vaccines. They’re also waiting for more emerging science. A U.K. study will offer insight into the effectiveness of so-called “vaccine mixing,” which could allow Canadians who already received AstraZeneca to sign up for an mRNA shot for their second dose. NACI will eventually offer its own guidance.

With every new development, NACI could choose to clam up and publish only highly technical advice. A senior government source familiar with the vaccine rollout emphasized that NACI runs its own affairs, but did add it’s a “fair question” whether or not the panel should hold public briefings at all.

Sundaram says that would be the wrong lesson to learn from a nightmarish episode. “There’s a temptation in the scientific community to say, ‘Here’s the answer, don’t ask any more questions about it,’ ” she says. “I think it’s really important to be able to say, ‘Look, we have some updated guidance now. We have some new information. We’re going to change what we said before.’ ”

Public health officials must show their work and explain their rationale, Vohra-Miller says, because the consequences could be dire. “If you hide it and cover it up, you’re going to be damaging vaccine confidence in the long run, and rebuilding that confidence ends up taking 10 times longer.”

Clearly, the stakes are high. Almost everything about COVID-19 vaccines is complex. The facts, understandably, keep changing. A single miscue can spread anxiety almost in real time. But the solution to NACI’s woes might be deceptively simple: Keep doing the science. Just find someone who can properly explain it all to a weary, frustrated nation.