The NDP discovers the oil sands

The New Democrats hate the oil patch, right? They have a funny way of showing it. 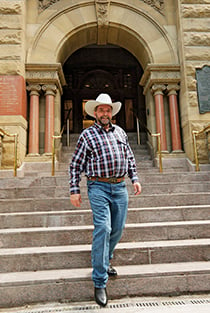 Thomas Mulcair is the leader of an NDP that is relentlessly defined by its critics as anti-oil. After all, not even a year has passed since Mulcair was lambasted for blaming the oil sands for inflicting “Dutch disease” on Canada by artificially inflating the loonie and harming the manufacturing sector. And at one point, NDP policy called for an all-out ban on new “tar sands” development. But when the NDP leader stepped up to a podium in Calgary’s Palliser hotel last month, before a chamber of commerce audience filled with oil executives, he had a very different message to deliver—the NDP, he declared, would be “a partner for the development of Canada’s energy resources.” While the controversial Northern Gateway pipeline to the West Coast was a “non-starter,” Mulcair said, he called his party “fierce advocates for economic development, as long as it’s sustainable development.”

News of Mulcair’s overtures to the oil patch didn’t exactly make headlines, but his talk was the latest salvo in a quiet, gradual shift in the NDP’s thinking about oil. NDP MPs have been visiting Alberta frequently—someone from the party is in Calgary or Fort McMurray once every couple of weeks, according to MP Peter Julian, the NDP’s energy and natural resources critic. In Ottawa, lobbyist registry records show Julian and Mulcair, along with environment critic Megan Leslie, have met regularly in recent months with representatives and lobbyists from Suncor, Enbridge, Encana and TransCanada.

At meetings of the House of Commons’ natural resources committee in January, Julian openly praised Suncor for embracing the kind of “value-added” development the NDP wants the rest of the industry to emulate. “Instead of shipping raw bitumen out of Canada and basically profiting American refineries, what [Suncor] has done is put in place the infrastructure, the upgraders and the refineries to ensure that the product that comes from Canada has maximum value added,” says Julian, who once worked as a labourer in a Burnaby, B.C., refinery.

Roland Lefort represents Suncor’s unionized workers in the oil sands. Lefort, a Cape Bretoner who has worked in Alberta since 1983, tagged along for the ride when Mulcair toured Suncor’s facilities last spring after it came to light that he’d never before visited the oil sands. “It’s evident that Suncor is a leader here in Fort McMurray,” says Lefort, pointing to efforts to remove sulfur dioxide from its emissions and draw less water from the Athabasca River.

Those measures are certainly appealing to the NDP, which in recent months has argued Canadian oil producers should refine more oil in Canada, export the finished product, and create thousands of jobs in the process. In that way Julian says the party’s position on development is fundamentally the same as in the past. “I wouldn’t say our thinking has changed. I think our thinking has deepened,” he said. “It’s front and centre in our preoccupations.”

But Lefort disagrees. He says the NDP’s shift is quite recent, and he believes his union’s proposal of a “third way” approach to development—not halting expansion, but not expanding at all costs—has caught the party’s attention. “Since the last election, we’ve seen a little bit of a different stance,” he said. “It’s the fact that it’s the biggest economic driver in the country right now. You can’t ignore that fact.”

And therein lies the tightrope Mulcair finds himself on. Sidle up too closely to the oil sands, and the NDP risks alienating environmentalists; fail to show support for the energy sector, and the NDP’s political enemies won’t let them forget it. David Anderson, the parliamentary secretary to the minister of natural resources, recently bellowed to the House that New Democrats “continue to oppose all job-creating resource developments.”

On the oil sands issue, the NDP also faces a conundrum in Quebec, where close to 60 per cent of its caucus have their ridings. In recent months Quebec Premier Pauline Marois has signalled she is receptive to a plan to pipe oil sands crude from Alberta to the East. But if talks around an eastern pipeline spark heavy environmental opposition in that province, Mulcair will be under pressure to pick sides between environmentalists and the oil industry.

Politics aside, the economic reality is that Alberta crude is a significant job creator that any federal NDP government would need to pay for its spending platform—a fact not lost on the industry itself. “If you’re going to have this broad social agenda, you need a robust economy to support it,” says Travis Davies, a spokesman for the Canadian Association of Petroleum Producers. “Obviously, oil and gas and the oil sands are an important part of that,” he says, adding that the region’s unions, including Lefort’s outfit at Suncor, understand that reality. With 72 per cent of Canadians telling a Leger poll last October they support oil sands development, the NDP may simply have no choice but to refine its attitude toward the oil sands. “What has happened over the last number of months is a gaining of traction of the whole narrative on how important the energy sector is to the Canadian economy,” says Todd Nogier, an Enbridge spokesman. “I wonder if [the NDP’s position] has more to do with this overarching narrative.”