The NDP's next steps after the convention

Councils, caucus, fundraising issues: The specifics of the process coming for the NDP 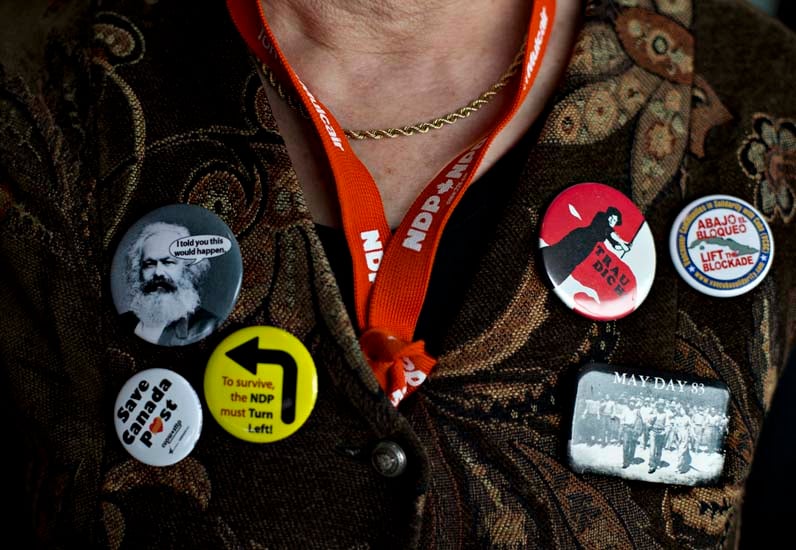 A supporter shows her badges while attending the NDP Federal Convention in Edmonton Alberta, April 8, 2016. Jason Franson for Maclean’s Magazine.

EDMONTON – Tom Mulcair is set to be replaced as NDP leader after 52 per cent of delegates gathered in Edmonton voted in favour of holding a leadership contest.

Mulcair plans to stay at the helm of the party until a successor is chosen at a leadership convention to be held within 24 months.

Here are five next steps for the party:

1. Meeting of the NDP Federal Council

The key decision-making team for the NDP met on Sunday to initiate a process to determine the next steps that will eventually set the wheels in motion for a leadership race. Earlier in the day, delegates voted to give the party up to 24 months to hold a leadership convention, a year longer than stipulated in the NDP constitution.

2. Caucus to meet on Wednesday

NDP MPs will meet again with Mulcair on Wednesday as they normally do, but they will have much to discuss now that their leader has been rejected by a majority of delegates at the convention. Some members of caucus have already quietly questioned whether it’s in the best interests of the party and the goal of moving forward to keep Mulcair at the helm until his successor is chosen.

Related: Paul Wells on what comes next for the NDP

No one openly challenged Mulcair during his bid to stay on as leader. But some of his competitors from 2012, including Manitoba MP Niki Ashton, declined to endorse the leader ahead of the convention. Former MP Peggy Nash, another erstwhile leadership rival, penned a scathing critique of the NDP’s election campaign, stopping just short of calling for the leader’s head.

B.C.’s Nathan Cullen, who finished third in the 2012 leadership race, did endorse Mulcair and said he’s no longer interested in leading the party. Similarly, documentary filmmaker Avi Lewis, who spearheaded efforts to promote the polarizing Leap Manifesto at the NDP convention, denied any interest in the leadership. But that was before there was an opening at the top.

Former Halifax MP Megan Leslie has also been mentioned by some New Democrats as another possible contender.

Related: Where will the NDP land after the Leap?

4. Consider how to raise money

The party faces a number of financial challenges after the marathon 78-day election campaign drained party coffers. The party’s finances are likely to be further straitened by the coming leadership contest, as candidates solicit donations for their own campaigns. Some New Democrats also fear the party’s ability to raise money will be impaired as long as Mulcair remains nominally at the helm.

The convention exposed a deep divide within the party as New Democrats struggle to reinvent the NDP after the election debacle. The debate over Mulcair’s leadership and over the Leap Manifesto showed a tug of war between those who want the party to shift back to its left-wing socialist roots and those who prefer a more centrist approach. That divide will likely play out during the leadership race, making it challenging for the NDP to provide coherent opposition to the Trudeau government in the House of Commons.