Through a friendship with a disgraced New Brunswick lawyer and a possible real estate scam in 2010, Gabriel Wortman netted hundred of thousands of dollars 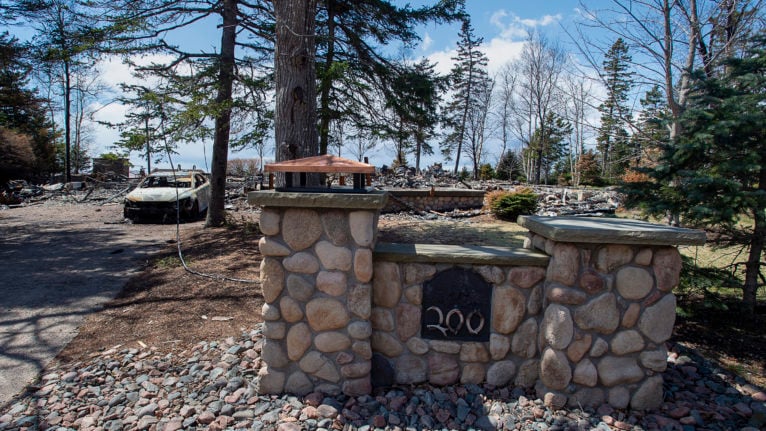 A fire-destroyed property registered to Gabriel Wortman at 200 Portapique Beach Road is seen in Portapique, N.S. on May 8, 2020 (CP/Andrew Vaughan)

The denturist who killed 22 Nova Scotians in April acquired about $300,000 in mysterious circumstances from the estate of a disgraced lawyer who was convicted of sexually assaulting a teenage boy.

Property and corporate records show that Gabriel Wortman sold two Fredericton rental properties belonging to Tom Evans for about $300,000 in 2010, after Evans died at the age of 60.

But a woman who served as the director for the holding company that controlled the properties, and who spoke to Maclean’s on the condition her name not be used, suspects that Wortman got hold of the properties and sold them by tricking her.

The relationship between the two deceased men may explain how Wortman got the money to acquire the property that he owned in Portapique, where he killed 13 people on April 18, and how he acquired one of the guns that he used in the crime.

On the night of April 18, Wortman, dressed as an RCMP officer, began killing his neighbours and burning properties. He escaped police and continued his rampage the next day, driving around in a replica RCMP cruiser, shooting people known to him and random strangers.

The RCMP, who are refusing to reveal details about Wortman because of an ongoing investigation into the source of the guns he used in the massacre, have said the killer had five illegal guns, four of which were smuggled into Canada from the United States, the fifth “through the estate of a deceased associate.”

The killer’s father, Paul Wortman, has said that a friend—believed to be Evans—helped Wortman get a handgun. “He ordered it in the States somewhere,” Wortman told Halifax’s satirical Frank magazine in an interview not long after the shooting. “It was sent from wherever he ordered it to Houlton, Maine. His friend gave him the information, or probably made the arrangements or told him who to contact.” 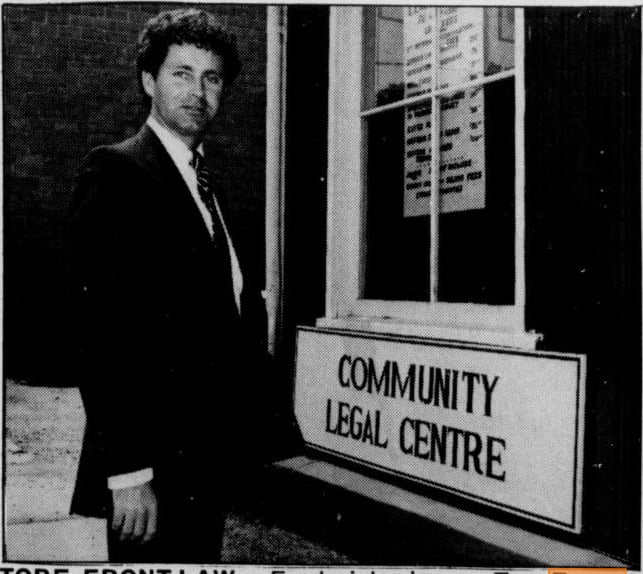 Paul Wortman said a contact of Evans held the gun for Gabriel, who smuggled it into Canada. Paul Wortman related the same story about the origin of the handgun to an investigator working for the families of the victims, according to a summary of an interview obtained by Maclean’s.

People who knew Wortman say he spoke about smuggling cigarettes across the border from Maine while he was a student. He told one acquaintance that he did so in a Zodiac-style inflatable boat.

Paul Wortman said that his son became acquainted with Evans through relatives. But when Gabriel Wortman sold the buildings, he told the buyer that he got to know Evans when he was renting a room from him while a student at the University of New Brunswick.

“What I was told, from him, is basically he lived in the properties when he was going to university and he befriended Evans,” said Gabriel El Zayat. “And they stayed in close contact and when he passed away he left the properties.”

Gabriel Wortman was a student at UNB in the late 80s, as Evans’ professional life was going off the rails.

Fredericton lawyers remember Evans as a colourful and publicity-seeking young lawyer in the early 1980s, and he often appeared in the pages of the local Daily Gleaner. He handled high-profile criminal matters, including one case where he defended five South American men accused of coming to New Brunswick to try to break two accused Colombian cocaine smugglers out of prison.

In the late 1980s, his own legal problems ended his career.

In 1986 he went to police to complain about being assaulted by a 19-year-old male prostitute he regularly hired. A jury acquitted the young man, and Evans soon faced charges himself.

He was charged with a firearms offence after he and some British soldiers frightened children at a bible camp while skeet-shooting near CFB Gagetown. And in 1987 he was convicted of giving liquor to underaged boys and sexually assaulting one of them. He was sentenced to three months in jail.

The assault took place after two teenage boys were arrested by the RCMP for drunkenness. Evans had them released into his custody and gave them more liquor. When they passed out, he sexually assaulted one of them. According to a precis of the case from the New Brunswick Court of Appeal, Evans “lied about the victim’s whereabouts when a telephone enquiry to his residence was made on behalf of the victim’s mother. His plan to seduce the victim was premeditated.”

Evans appealed the conviction and lost. The provincial law society suspended him and in 1991 he resigned from the bar, likely to avoid being formally disbarred.

At the same time that Evans’ career was collapsing, Wortman, then 19, was moving from Moncton to Fredericton for university.

A college friend, broadcaster and comedian Candy Palmater said in an interview this year with The Chronicle Herald that Wortman struggled at university. “He was a little bit different, like I’m a little bit different, but he was beautiful and he had a really deep heart, but he was the brunt of everybody’s jokes.” A spokeswoman for Palmater declined to say whether she had information about Wortman’s relationship with Evans. “Candy will not be speaking about this sensitive issue further,” said Denise Tompkins in an email.

Wortman’s friendship with Evans eventually led to a business relationship.

RELATED: The Nova Scotia killer had ties to criminals and withdrew a huge sum of cash before the shooting

Corporate records show that in 1996 Wortman became the president of Northumberland Investments, the holding company that Evans established in 1984 to handle his two rental properties in downtown Fredericton, including one on Northumberland Street. In 1997, Wortman’s signature appears on a $100,000 mortgage with a private lender on one of the properties.

El Zayat, who bought the properties from Wortman after Evans’ death, said he was told Evans lived off rental income from those properties, and he lived in one of the buildings himself.

El Zayat said Wortman’s acquisition of the properties, which he believed was an inheritance, seemed odd to him. “I found it really odd that somebody would leave a bunch of properties to a guy. I just found it odd. I remember telling my real estate agent, this is weird.”

Corporate records show that in 2008 Wortman was removed from the company. (Public records do not outline why this change was made.) A friend of Evans who was the lone director of the company at the time says Evans was upset with how Wortman was spending money.

The former company director was surprised to learn that Wortman had managed to sell the properties belonging to Evans. “Tom didn’t want Gabe to inherit anything because he felt he was being foolish with his money so he asked me to sign [corporate documents to remove Wortman],” she said.

On Jan. 8, 2010, two months after Evans’ death, Wortman was reinstated as president of Northumberland Investments, corporate records show. The director believes Wortman tricked her into signing the document that made that possible. “When Tom died Gabe asked me to sign off or I would become responsible for the debt. So I did.”

After selling the buildings in February, 2010, three months after Evans died, Wortman made “atypical cash deposits” worth $200,000 and a term deposit worth $46,600, according to a Suspicious Transaction Report filed by Toronto-Dominion Bank later in 2010 to the Financial Transactions and Reports Analysis Centre of Canada, documents released in court show.

Nova Scotia property records show Wortman bought properties on Portland Street in Dartmouth, where he established a denture clinic, and in Portapique, where he built a cottage, in September of 2010, just months after he sold the Fredericton properties.

Wortman had a number of property-related disputes. In 2004, he managed to become the owner of one rural Nova Scotia home after befriending a cash-strapped auto body specialist and getting him to sign legal documents that he eventually used to gain ownership. In 2010, he tried a similar legal technique with his uncle until a judge put a stop to it.

Property records show that one day before the deed of the Fredericton properties were transferred, Wortman became the director of Berkshire Broman Corporation, another New Brunswick company. The previous owner was Kipling Scott MacKenzie, a Nova Scotian who was convicted of arson in 1996 and is currently facing several charges in provincial court. Wortman later used that company to buy the RCMP cruiser he used in his rampage.

According to documents filed in court by the RCMP, several other Suspicious Transaction Reports were issued after the shooting concerning Wortman’s financial transactions in the previous months.

On March 20, Wortman withdrew $475,000 from a Brinks cash depository in Dartmouth. Documents filed in court by the RCMP say the money was from his investments and the pick-up was arranged by CIBC. When Maclean’s first revealed that transaction in June, RCMP declined to comment, although RCMP sources said the transfer appeared to have the hallmarks of a payment to a confidential informant.

The RCMP has angrily rejected questions about whether they were involved with Wortman, denying they had a “special relationship” with him in interviews with other media outlets. The RCMP has repeatedly declined interview requests from Maclean’s about the withdrawal, and did not release details of the financial transactions until forced to do so in an action brought by media organizations seeking to have redactions stripped from search warrants.

RELATED: The Nova Scotia shooter case has hallmarks of an undercover operation

The RCMP has no details to add about his relationship with Evans. “We are looking into the gunman’s previous relationships and interactions as part of the ongoing investigation,” said Cpl. Lisa Croteau in an email last week.

A preliminary psychological autopsy conducted for the RCMP concluded that Wortman was an “injustice collector”—someone who nurses grudges until he explodes in rage.

In July, the Nova Scotia and federal government promised to establish a public inquiry into the shooting rampage. They had earlier announced a review, without the power to compel testimony, but reversed themselves and announced an inquiry after family members protested.

Former Nova Scotia Chief Justice J. Michael MacDonald and former Fredericton Police Chief Leanne Fitch are to be two of the panelists. Former deputy prime minister Anne McLellan dropped out after the government announced the review would be an inquiry. The governments have yet to name a replacement.

Stephen Maher is an investigative journalist. He can be reached at stephenjamesmaher@gmail.com