The killer's former partner filed a claim against the estate, seeking damages for assault and false imprisonment, as lawyers for the families of the victims brace for a legal battle 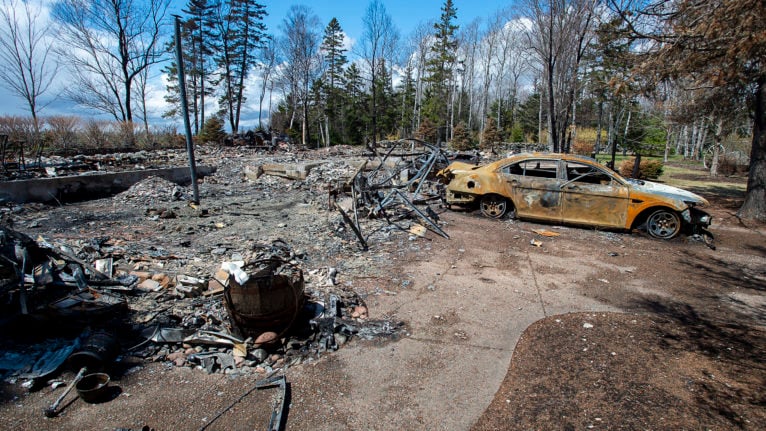 A fire-destroyed property registered to Gabriel Wortman at 200 Portapique Beach Road is seen in Portapique, N.S. on May 8, 2020 (CP/Andrew Vaughan)

The former partner of the denturist who killed 22 Nova Scotians in an April shooting rampage has filed a claim against his estate, setting the stage for what could be an emotional legal battle with the families of his victims over his holdings, which are estimated to be worth about $1.2 million, including properties in Dartmouth and Portapique.

The statement of claim, filed in Nova Scotia Supreme Court in Halifax on Wednesday, is the first public statement from the former partner since the events of April 18 and 19, when her common-law partner went on a murder rampage in a replica RCMP cruiser.

She is seeking damages for assault and battery and false imprisonment and “intentional infliction of mental suffering” at the hands of Gabriel Wortman on the night of April 18.

The RCMP say she was assaulted by Wortman in his Portapique property on the night of April 18 and escaped from him, hiding in the woods overnight. When she emerged early the next morning, she shared photos with the police and informed them he was wearing an RCMP uniform and driving a replica cruiser.

He continued his rampage the next morning, shooting random strangers and people known to him, before RCMP officers shot him to death in a gas station outside Halifax.

Since then, the former partner has kept silent, except to file a renunciation, on May 25, of her role as executor of his will, of which she was the sole beneficiary. Media outlets interpreted that to mean that she had renounced her interest in her estate, which was not the case.

In the statement of claim filed Wednesday, she asserts that she was the common-law spouse of Wortman, and that she has “suffered physical, emotional and psychological injuries and trauma” as a result of his assault on her.

She and her lawyer have declined all media requests since the event.

Lawyers for the families of the victims of Wortman’s rampage have been bracing for a legal battle with the former partner for more than a month. Robert Pineo, who is representing the families in a class action lawsuit against Wortman’s estate, said last month he was upset that she allowed the impression to stand that she had renounced her claim. “She should have corrected that rather than let the media believe she was doing something altruistic when she wasn’t.”

On Thursday, though, he struck a more conciliatory tone, telling CBC that she likely has a claim. “If her allegations are proven true, she probably does have a legitimate claim,” he said. “For us, it just means if the court gives her an award, she’ll share pro rata with the families.”

Wortman’s former partner is believed to have been a victim of physical abuse at his hands. At least some neighbours in Portapique witnessed him assault her once at a gathering, according to a neighbour who reported it to the RCMP. The RCMP appear not to have acted on that report, one of a number of warning signs about the killer that they seem not to have acted on.

The public trustee, who is administering the estate since the former partner withdrew as executor, will have to disburse funds against valid legal claims before passing any remaining assets on to the beneficiary, said Richard Niedermayer, an estate lawyer with Stewart McKelvey in Halifax.

“She is seeking damages from the estate for the wrongful acts of April 18/19 and presumably if successful her monetary award would rank proportionally with a damage award to the families of the other victims,” he said Thursday.

Lawyers for the victims’ family members could contest her claim to be Wortman’s common law spouse, but if she can show that she was a spouse, she could get money, said Niedermayer.  “If she was able to assert some kind of claim that pulls assets out of the estate to her before the estate responds to various damage awards that are given to tort claims for wrongful death and assault and all those kinds of things, then that would be to her benefit.”

Wortman’s former partner is the sole beneficiary named in Wortman’s four-page, handwritten will, which he wrote in 2011, referring to her repeatedly as “my dear female friend/companion.” The will was witnessed by one of the former partner’s sisters and her husband. It leaves her his entire estate, including all the shares of his three companies.

Court documents filed by lawyers acting for Wortman’s victims suggest that a battle over Wortman’s assets could be emotional.

In an affidavit filed in Supreme Court in Truro, Pineo, the lawyer for the families of Wortman’s victims, reports that Wortman’s father, Paul Wortman, spoke with him on June 3 to offer assistance to the families, including by “giving statements or testifying in court.” Paul Wortman told Pineo of two places in Wortman’s Dartmouth home, above his denture clinic, where he said money was hidden in secret compartments.

Responding to a request for comment about the assertions in the affidavit, which have not been tested in court, her lawyer, Peter Rumscheidt, said “I will be making no comment to the media regarding the claim.”

A series of affidavits filed in Nova Scotia Supreme Court show Pineo and private investigators seeking and winning a court order to search the premises to check the compartments, a process that was complicated by the requirement that police officers clear the location for explosives. Eventually, the RCMP assisted investigators in searching the hidden compartments, and no cash was found.

The family members have not yet had an accounting of what cash was recovered by the RCMP. “We’re getting some mixed messages about exactly where cash was found and no knowledge about exactly how much cash was found,” said Sandra McCulloch, who is handling a proposed class action suit against the RCMP and the province, alleging shortcomings in the police response to Wortman’s rampage.

Wortman withdrew $475,000 in cash from a Brink’s cash depository in Dartmouth on March 30, 19 days before his rampage, a mysterious transaction that mystifies banking experts. The RCMP has declined numerous interview requests from Maclean’s, but in an interview with CBC said concerns about the pandemic led Wortman to liquidate his savings and investments.

Lawyers for the victims’ families do not yet know how much cash the RCMP has recovered from Wortman’s properties and where it is.

“It seems to me that the $475,000 or $500,000 that’s been referenced in the estate’s filings is more likely made up of bank account records as opposed to cash,” said McCulloch. “We’re still trying to sort out what information is out there but not all of it is outside the RCMP at this point.”

Nova Scotia RCMP spokeswoman Cpl. Lisa Croteau said in an email this week that officers can’t shed more light at the moment because of an ongoing investigation.

“I can confirm we have seized a quantity of cash as part of the investigation into the incidents on April 18 & 19. As this is an ongoing investigation, we are not able to provide more detail at this time.”