The place to be on Canada Day? Lining up for Mandarin's free buffet

James Chiu, Mandarin's president, says the free meal 'is one of the ways for us to show our appreciation for Canada' 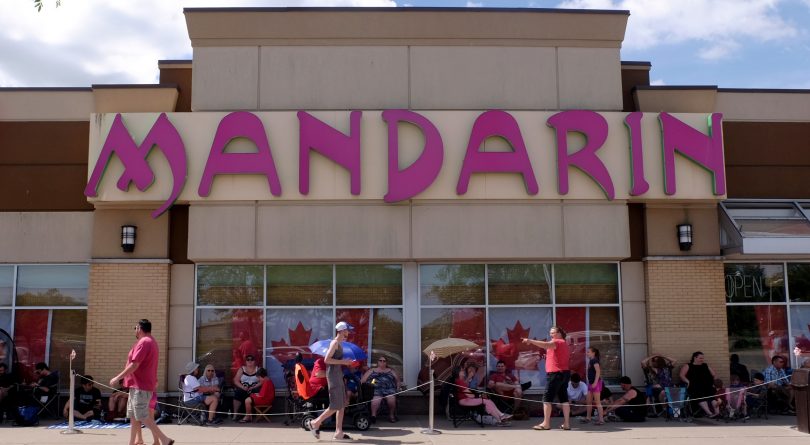 The lineup for endless egg rolls and chicken balls stretches hundreds of metres around a vacant commercial square in Niagara Falls slated for demolition; past the Brick, past Michaels, past a chain link fence bearing signs warning folks to “KEEP OUT.” It is a scattered mess of beach umbrellas, beat-up tents, wheelchairs and lawn chairs. One woman, draped in a black dress with tattooed shoulders and a sunburnt neck, arrives with her family just after the doors open at noon and reluctantly takes her place at the tail end of the queue. She sends her husband to Tim Hortons. “Grab a tea for me,” she says, “and something to eat for the kids. This is gonna be awhile.”

The irony of spending money on food while waiting for free food is richer than Mandarin’s sweet and sour soup. There’s no such thing as a free lunch, but damned if skipping the bill doesn’t feel like it. It’s the gambit employed by all 29 locations of Ontario’s plus-sized Chinese buffet chain every five years on Canada Day, a massive celebration where Canadians get to eat all they can eat and, after stuffing themselves to stomach aches, receive nothing but fortune cookies on their receipt trays. In this year of the boar, Mandarin is commemorating its 40th anniversary. Last time they did this, celebrating their 35th, one reporter claimed the chain lost $500,000 on the single day.

Then again, you’ve got to assume they build this into the marketing budget. In the Falls, the enthusiastic parade of 300 hungry Niagarans is led by a giddy woman named Annette Lawrence. She got here at 5:30 a.m., “but I have my reasons,” she quickly adds. She broke her ankle recently, and she’s diabetic, so she needed to snag a nearby parking space. Sitting under a wide black umbrella, she gleefully recalls how she spent her morning: reading her romance novel and listening to the groundskeeper’s stories of local Niagaran lore, daredevils barrelling over North America’s strongest waterfall.

RELATED: The splendor and the slop of Canada Day

Behind her, Mandarin’s pink-shirted staffers, smiling young Chinese teenagers on summer vacation, stride down the line, handing out maple leaf–shaped fans, bread rolls and warm, gooey sesame balls. Fred Tong, one of the restaurant managers, strolls beside them, hunching over to hand out plastic bottles of water. The last thing this restaurant needs is someone passing out on them. That, at least, is a preventable PR disaster.

The other disaster, such as it is, erupted the day Mandarin HQ announced the deal. Mandarin is only officially giving out free meals to Canadians citizens—not permanent residents, not visa holders, not tourists. Proof of citizenship is required in the form of a passport, birth certificate or citizenship card. 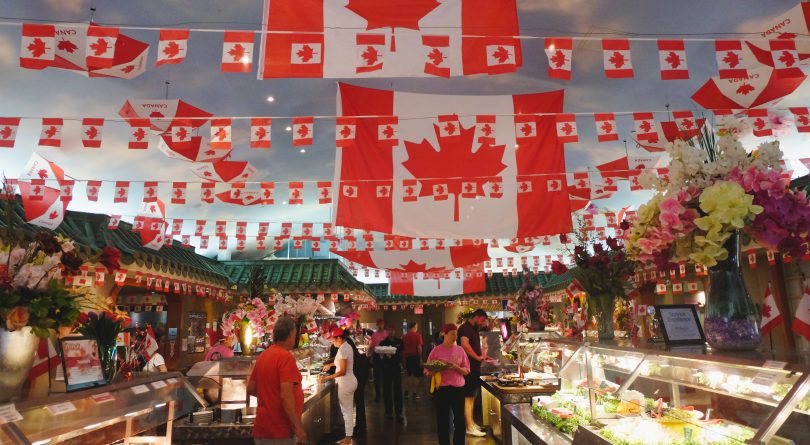 Exceptions exist, of course. Ontario’s Human Rights Code states that “every person has a right to equal treatment with respect to services, goods and facilities, without discrimination because of race, ancestry, place of origin, colour, ethnic origin, citizenship, creed, sex, sexual orientation, gender identity, gender expression, age, marital status, family status or disability.” But Richard Moon, a law professor at the University of Windsor, explains that it is not deemed discrimination when an organization prefers Canadians “for the purpose of fostering and developing participation in cultural, educational, trade union or athletic activities”—things like sports teams and cultural grants. However, Mandarin’s offer wouldn’t fit that exception, he argues. Even if it did, the exception considers citizens and permanent residents equal. Mandarin’s offer, Moon says, “would appear to be discrimination on the grounds of citizenship/permanent residency in the provision of services under the Code.”

Outrage across social media swiftly overtook the deal announcement this year, all the more because the corporation was founded by immigrants. James Chiu, the company’s current president, moved to Canada from Taiwan in 1976 before co-founding the chain three years later in Brampton. When asked about the controversy, Chiu emailed a statement to Maclean’s. “This event is one of the ways for us to show our appreciation for Canada,” he wrote. “Canada welcomed us into the country many years ago and has supported us ever since.”

RELATED: A cross-country singalong of the national anthem on Canada Day

In the Falls, though, Tong brushes off any legal concerns. “We are not sensitive about it,” he says, sporting a red-and-white striped tie—more candy cane than Canada Day. “As long as they line up, we let them in.” For Tong, the deal is about giving back to the community and celebrating Canada.

Besides, some of the line’s non-citizens understand the system. Carmen Cuellar joined her son and daughter-in-law at the front of the line, third from the top, enjoying a saved spot held for her since 8:15 Monday morning. With white hair and a dazzling frilly green blouse, she is the Mexican abuela of telenovelas. She has bounced between her native country and the Niagara region since 1956, introducing Mexican students to the Great White North, eventually making the leap herself. She started eating at the local Mandarin when it opened eight years ago, and reckons she comes near every week now. She’s on a first-name basis with all five managers and most wait staff. At home, her fridge is plastered—”the front and the sides,” she boasts—with photos of celebrations she’s held at the Chinese buffet.

But she never became a citizen, so today, she expects to pay, same as she would any other week. When asked if her son will pay for her, she huffs and waves him away. “I can pay for myself.”