Bissonnette's Facebook page suggested he was a fan of U.S. President Donald Trump, a far-right leader in France and the separatist Parti Quebecois 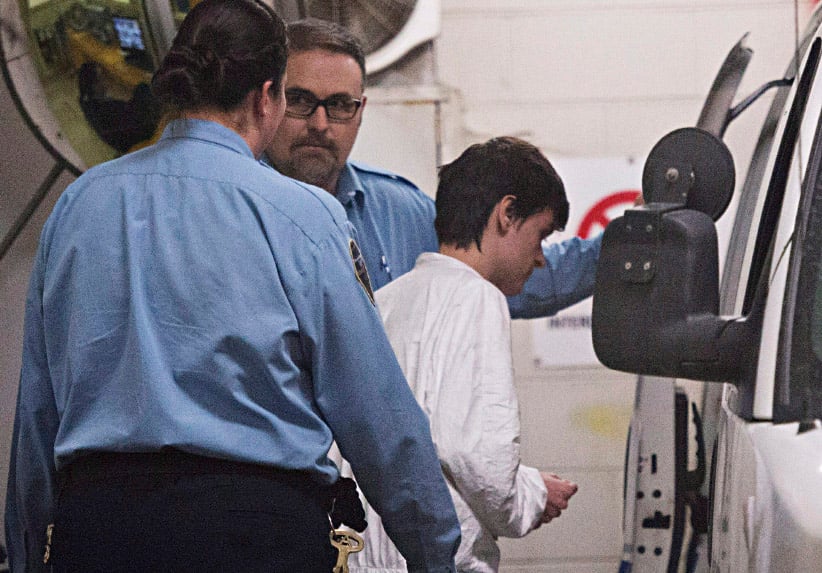 A university student accused of carrying out the horrific massacre on a mosque in Quebec City was a fan of U.S. President Donald Trump, a far right leader in France and the separatist Parti Quebecois as well as a bird and chess enthusiast, according to what appeared to be his Facebook account.

A handcuffed Alexandre Bissonnette, 27, made a brief court appearance Monday at which he was arraigned on six counts of first-degree murder and five of attempted murder. Wearing a white jumpsuit, the tired-looking accused stared at his feet and fidgeted during the hearing.

Bissonnette — the grandson of a decorated Second World War veteran, according to the social media profile in his name — was then remanded in custody until his next appearance Feb. 21.

RELATED: The scene in Quebec City a night after a deadly mosque attack

Police offered no information on what they believe motivated Sunday’s shooting, which Prime Minister Trudeau has denounced as a terrorist act.

“The charges that have been laid are those that were disclosed by the evidence so far,” said Michel Fortin, with the Quebec prosecutor’s office. “It’s an ongoing investigation.”

The Facebook profile in Bissonnette’s name indicates that he “liked” Trump, French politician Marine Le Pen, the separatist Parti Quebecois and the Israeli armed forces. Le Pen, the leader of France’s National Front in France who has won accolades from white supremacists, is known for her anti-Muslim, anti-immigrant ideology.

Hema-Quebec — which manages the blood supply in Quebec — said Monday that Bissonette is an employee of the agency.

It said in a statement that as an organization whose “primary mission is devoted to the gift of life,” the arrest of Bissonette as a suspect in the mosque shooting has sent a “shock wave” through the organization.

Hema-Quebec also said it would not comment further due to ongoing police investigation.

The U.S.-based Site Intelligence Group called it “unlikely” that Bissonnette had any Jihadi ties in light of the postings.

According to police and witnesses, a man entered the mosque and opened fire without warning during evening prayers, sowing death, injury and panic. Six worshippers were killed and 19 wounded — all men. Of the five victims who remained in hospital Monday, two were in critical condition, authorities said.

The horrific act prompted several vigils across the country and expressions of sympathy from around the world.

Bissonnette, who according to the Facebook account was from Cap-Rouge, Que., was enrolled in the Faculty of Social Sciences, Universite Laval said in a statement. He has now been banned from all studies or research activities until the court process is over, the school said. The student directory lists him as pursuing an undergraduate degree in political science.

RELATED: A moment of silence and solidarity in the House of Commons

One Facebook picture showed a boy dressed as an army cadet. Canadian Cadet Organizations said in a statement that Bissonnette was in the cadet program in the Quebec City area between 2002 and 2004. The national program focuses on developing leadership and citizenship skills as well as physical fitness. Cadets are not members of the Canadian Armed Forces and do not receive military training, the organization said.

Among groups to which he belonged — according to the Facebook profile, which has since been taken down — was the Laval chess club and a birding group. The account also had numerous selfies of the neatly groomed young man, who appeared to be a blues fan.

Another “like” was for the Parti Quebecois association in Louis-Hebert, a riding in Quebec’s national capital region currently held by a Liberal member, and another for H.G. Wells, author of the 1890s science-fiction novel “War of the Worlds.”

“It’s with pain and anger that we learn the identity of terrorist Alexandre Bissonnette, unfortunately known to many activists in Quebec for taking nationalist, pro-Le Pen and anti-feminist positions at Laval University and on social media,” Deschamps wrote on the page of the group.

However, Bissonnette’s online profile offered few clues to the mass shooting he is accused of carrying out.

His favourite citation, according to the Facebook page, was taken from the ancient Greek philosopher, Plato:

“For a man to conquer himself is the first and noblest of all victories.”