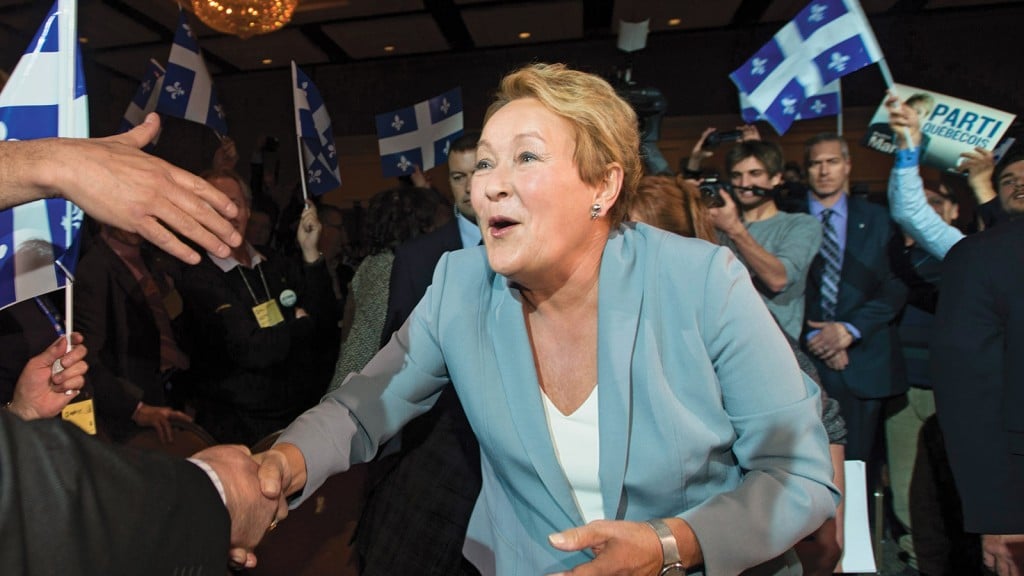 The two parties may diverge on most issues, yet in promising to ban religious symbols in the public service, the Parti Québécois has a staunch ally in France’s Front National—specifically, when it comes to the Muslim veil.

“In France, the problem with the veil is relatively recent. When I was young, I went to school with kids from Muslim countries, and their mothers didn’t wear veils,” says Denis Franceskin, the North American representative of France’s anti-immigration party. “Now there are bans on Santa Claus and the eating of pork in certain schools. There are swimming pools that are closed to the public so that Muslim women can bathe there. I understand the anger [in Quebec]. It’s legitimate.” Any overlap between traditionally leftist Parti Québécois and the far-right Front National is proof positive of that old chestnut about how politics makes for strange bedfellows. Yet, midway through the current election campaign, the PQ has apparently decided that treading into Front National territory of ethnic nationalism will be the key to its foundering poll numbers.

“If you want the charter [of Quebec values] to see the day, it will take a majority Parti Québécois government,” said PQ minister and charter architect Bernard Drainville in a promotional video for the charter, released two weeks into the campaign. Drainville’s cheery stump speech expounding the virtues of a religiously neutral state notwithstanding, the charter hardly has unanimity in Quebec society. Successive polls have suggested that Quebecers themselves are nearly equally divided on the necessity of such a thing. Nearly 60 groups and organizations, including the province’s law society and its human rights commission, have come out against it.

The opposition seems to have energized the PQ campaign—as has what Drainville calls “the silent majority” of Quebecers who wholeheartedly embrace the charter. Indeed, Drainville himself has campaigned with PQ candidate Louise Mailloux, who, in a 2012 blog post, decried the “kosher tax” placed on supermarket foods—a myth peddled by fringe hate groups, among others: “On the Muslim side, meanwhile, officials have removed pork from the menus at daycares and replaced it with Allah’s chickens, their necks slit in the direction of Mecca.” (Mailloux recently apologized “to anyone who was offended or hurt” by her words, though the unaltered blog post remains on her website.)

The Parti Québécois’s slide into what is commonly known in French as les enjeux identitaires (“identity issues”) has dismayed Jean Dorion. A seasoned Quebec nationalist and long-time Péquiste who has spent nearly half a century advocating for a separate Quebec, Dorion recently split with the party over its charter project. Last fall, he published a book-length essay critiquing what he calls “the religion of secularism” and the damage it will cause the sovereignist movement in the long term.

As disappointed as he is in his former party, he says the charter was in some ways inevitable. Quebec’s sovereignty movement is well into its fifth decade, yet the province remains within Canada’s borders. “The charter is the fruit of defeat suffered by the nationalists in the 1980 and 1995 referendums,” Dorion says. “It’s like some of them want to blame people who had absolutely nothing to do with these defeats. It’s easier to bully Muslims than the federal government.”

He doesn’t want to use the term “ethnic nationalism,” wherein ethnicity or race define a nation—and which, at its extreme, has been the source of bloody conflict. Nor does he believe his former PQ colleagues are themselves xenophobic.

“But it’s a substitute to ethnic nationalism,” Dorion recently told Maclean’s. “Like ethnic nationalism, it creates a category of people one can scapegoat, but with seemingly rational arguments. The victims are not being ostracized for their race or origins, but for their non-conformity with a certain idea of a neutral state.” (Drainville didn’t respond to requests for comment.)

There is a certain irony to the Front National’s endorsement of the Quebec values charter. The party, which has recently tasted electoral success in its native country, was long on France’s political fringes—and was staunchly against the PQ’s electoral platform and quest for sovereignty. Because of its liberal abortion laws and general immorality, Quebec “is too fragile and vulnerable to separate,” wrote Roger Alacoque, Front National’s long-time Canadian representative. A member of the Quebec and federal Liberal parties, Alacoque was a determined federalist—if only because a more united Canada meant a more united white race. The PQ under René Lévesque, meanwhile, actively recruited members of Quebec’s cultural communities to the sovereignist cause.

Things seem to have changed. Recently, the Canadian Muslim Forum organized a candidates meeting in the Montreal suburb of Laval to discuss the economy, employment and the charter. All the political parties running in the current election sent their candidates—except for the Parti Québécois. “It doesn’t surprise me; they don’t want to hear us,” says CMF spokesperson Kathy Malas. “It’s politics. They probably have strategic reasons not to vote for us.” (A PQ spokesperson didn’t return a request for comment.)

There is no guarantee the PQ’s renewed identity gambit will translate into a winning campaign. Though roughly half of Quebecers (and a majority of francophones) agree with the charter, several polls suggest banning religious accoutrements is hardly a priority in the province. Drainville himself recently lamented, in Quebec City’s Le Soleil newspaper, that “not many people are talking about the charter in the campaign.”

Yet most politicians know how explosive matters of identity and ethnicity can be—few more, in fact, than France’s Front National. The party has since exited France’s political wilderness and has never been closer to political legitimacy, despite years of negative media coverage and demonization. The Front National could serve as a worthy model for the PQ, Franceskin says. “Generally, people try to blame those who try to promote what’s important to keeping society together,” he says. “Culture and heritage are important. If I come to Quebec, I must adopt the culture, the way of life. Otherwise, it will become no different than living in Marrakesh or Paris.”