The Prince of Pot returns to Vancouver 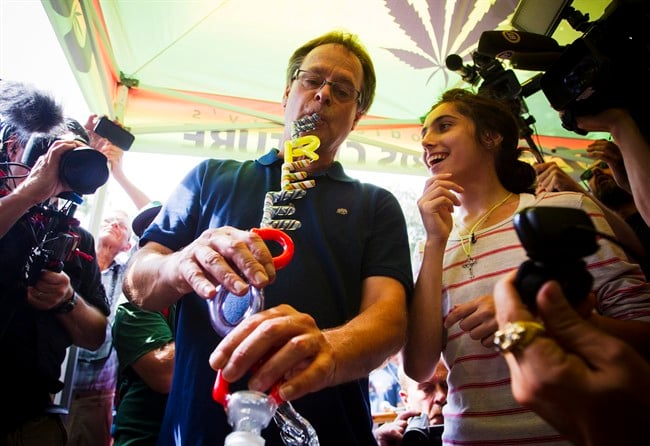 Marijuana activist Marc Emery smokes from a bong with the words ‘Freedom’ on it during his return party in downtown Vancouver, B.C., on Sunday, August 17, 2014. (Ben Nelms/The Canadian Press)

VANCOUVER – Hundreds gathered in Vancouver to welcome the return of Marc Emery, Canada’s self-styled “Prince of Pot,” after he spent more than four years serving a prison sentence in the U.S.

The welcoming ceremony took place Sunday at Victory Square, not far from the Cannabis Culture store in the Downtown Eastside that bears his name.

Raucous cheers and clouds of pot smoke greeted Emery as he arrived at the park.

Emery did not waste any time getting into campaign mode.

The 56-year-old immediately started talking about the upcoming 2015 election, and threw his support behind Justin Trudeau’s federal Liberals.

“This is the most historic election for our culture because never before has legalization been on the ballot,” he said. “We’ve got 14 months to turn this country into a non-stop discussion about why we ought to legalize marijuana.”

Emery has been a supporter of the Liberals since Trudeau voiced his support for the legalization of marijuana, and Emery’s wife, Jodie Emery, has said she wants to run for the party in the election expected next year.

Emery’s support for the Liberals has prompted an aggressive response from the Conservative government.

Steven Blaney, federal Minister of Public Safety and Emergency Preparedness, has been critical of the pro-marijuana movement.

“While the Liberals would try to make it easier for our children to access marijuana, Canadians can count on our government to put forward policies that keep drugs off our streets and keep our families safe,” he said in a statement.

Trudeau has said he is not advocating making pot available for young people but rather opening up discussion on how to make the current laws more effective, arguing they are not protecting teens from the dangers of the drug.

For many gathered for Emery’s return, it was a landmark event.

Brandon McCreath, 32, said it would add much-needed momentum to the pro-legalization movement.

“I think it’s great, I think it’s galvanizing the community,” he said. “I think having Marc back, it’s kind of bringing people back out of the woodwork.”

“People that maybe normally wouldn’t attend certain rallies such as this, they’re coming out.”

Melissa Zorn, a 23-year-old marijuana activist, said the movement was not just about legalizing pot, but about individual rights.

“Marc fights for marijuana but he also fights for a cause in general, which is freedom,” she said.

“It’s not just about getting stoned,” said Zorn. “The message is freedom of choice.”

In 2010, Emery was extradited to Seattle and he pleaded guilty to selling marijuana seeds from Canada to American customers. He was sentenced to five years but was released early for good behaviour and crossed into Canada at Windsor, Ont., on Aug. 12.

Emery has said he has been arrested 28 times for what he called marijuana civil disobedience, with his just-completed sentence being the latest. He has said he plans to go back to work at the Cannabis Culture store and will continue his activism even if it means more arrests.