Gerald Butts: Bill 96's breezy invocation of the notwithstanding clause pushes us closer to the point where premiers—not courts—are the ultimate arbiters of our Charter rights 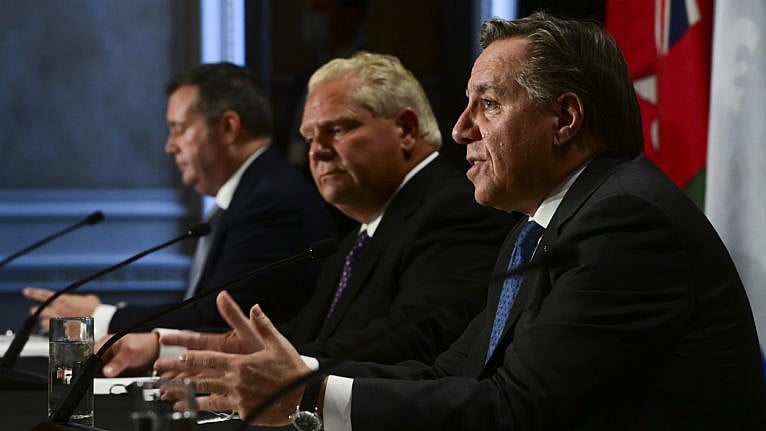 Should you be losing sleep over Bill 96?

I learned long ago, while living in Montreal, that the marginal utility of an anglophone having an opinion about the French language’s vitality trends from zero to negative. I won’t join the merry band of commentators in the ROC who have decided otherwise, except to say that Quebecers must be doing something right, because English has drowned most of North America’s other Indigenous and settler languages in a bathtub.

There’s been a rather ghoulish tenor in the commentary on Bill 96, as columnists host a seance to tell us what the Prime Minister’s father would think of his son’s reaction to it. As always, Chantal Hébert offers sure-footed guidance on such matters, counselling her colleagues to put away their ouija boards and pick up a history book. Trudeau pere’s predictions about 101’s impact were wrong, and he didn’t put up much of a fuss about it in any case.

But you never know, the ROC commentariat has predicted at least 12 of the last two national unity crises (Canada is broken!), maybe the 13th time’s the charm.

I asked in jest on Twitter whether unilaterally amending the Canadian Constitution means the government of Quebec has finally accepted it, and boy did that give some people the vapours. For the record, it’s not a serious constitutional or political argument. While péquiste luminaries Lucien Bouchard and Pauline Marois amended the constitution in 1997 to reorganize Quebec’s schools along linguistic rather than religious lines, they were careful to insert into the preamble assurances to the faithful that their act in no way meant they were recognizing the dastardly Constitution they were amending.

I know. It’s all too much even for me sometimes.

I’ve spoken with several leading legal beagles since Bill 96 was tabled. Most say the constitutionality of the Quebec government’s gambit is uncertain, but few were convinced it would be dismissed outright if it makes its way to the Supreme Court. I’m not a lawyer, so I’ll take their word for it, but it’s an idea that would have saved the country a lot of trouble had it occurred to Brian Mulroney and Robert Bourassa 30 years ago.

No, the truly invidious aspect of Bill 96 is neither of these temporary controversies, but its breezy invocation of Section 33 of the Canadian Charter of Rights and Freedoms, the so-called “notwithstanding” clause.

Deep history is outside the scope of this piece, but here’s a refresher on the highlights. Famously, Section 33 was the compromise that broke the mother of all constitutional logjams, allowing the Charter to be enshrined and the Constitution to be patriated, against the wishes of the Quebec government of the day. Supporters argued that it reasonably accommodated premiers’ legitimate concerns about judicial activism, while opponents countered that it neutered the Charter by letting provincial politicians override it whenever it suits their political interests to do so.

Less famously, when the Charter was a politically orphaned toddler back in the late 1980s, its court guardians let it play in traffic. In a landmark 1988 decision that still stands, the Supreme Court declined to place any real restrictions on the use of Section 33, essentially saying provinces could knock themselves out with it. If you’re inclined to go deeper into this, I highly recommend Professor Lorraine Weinrib’s magisterial 1990 takedown of the Ford decision. It’s worth reading in its entirety.

This is much more than an interesting debate for the country’s law professors, however. Not to put too fine a point on it, but what’s at stake here is whether the ultimate arbiter of your Charter of Rights and Freedoms is the Supreme Court of Canada or your provincial premier.

If you think that’s overly dramatic, consider that the most persuasive argument for Section 33 was that it would be used sparingly. The justice minister of the day, a fellow named Jean Chrétien, said it would only fix “absurd situations.” One wonders whether things we now take for granted because of the Charter, like marriage equality or women’s right to choose, would have qualified for that category in his mind at the time.

One further wonders whether that isn’t what the “reasonable limits” of Section 1 were supposed to do, but I digress. Section 33 was designed to get a deal and a deal it got. The consequences could be worked out later and—fun for us—their later is our now.

Bill 96 marks the third time in two years a provincial government has either used or credibly threatened to use Section 33 to exempt its legislation from Charter scrutiny by the courts. Twice in Quebec the legislature has overridden all Charter rights possible, whether or not they were related to the laws in question. The message is pretty clear: people’s rights won’t get in the way of an elected government. Within hours of Bill 96’s tabling, another premier was thirstily expressing his admiration for the approach.

Doug Ford threatened to use Section 33 when the Ontario Superior Court told the new premier of our largest province he couldn’t play with the structure of our largest city’s council like a cat with a ball of yarn. Not to be outdone, Francois Legault pre-emptively invoked the clause to restrict Quebecers freedom of religious expression in Bill 21. Despite a sharp rap on the knuckles by Quebec Superior Court Justice Marc-André Blanchard for his government’s “indifference toward the rights and liberties of those affected,” he is doing it again a year later. For extra effect, the emerging practice in Quebec is to use the notwithstanding clause in the province’s own Charter of Human Rights and Freedoms, adopted unanimously in 1975.

The current premier of Alberta has been an elected officeholder for 24 years now. While his views have apparently evolved, Jason Kenney has been seldom slow to clutch his crucifix about issues that ought not concern him: a woman’s right to choose, what women wear, whom people can love and marry—perhaps you sense a pattern. When he’s expressing “admiration” for another premier’s pre-emptive use of Section 33, you can bet it’s not so that he can protect minority language rights in Alberta. As he heads into an election year down in the polls and trying to keep a fissile coalition together, the temptation may prove too much for him.

And so here we are.

Call me old fashioned, but don’t democratic societies put minority rights into inviolate foundational documents precisely because they’re politically tempting to violate? Politicians find it easier to defend minority rights in theory than practice, and if you think living in an advanced democracy provides herd immunity from majoritarian leaders who abrogate them for kicks and giggles, talk to your nearest Indigenous person—or American.

The Charter of Rights and Freedoms was supposed to make these sad facts of our history unlikely prospects for our future. If it is left in the hands of provincial politicians to decide whether it applies to any of us on any given day, for any politically convenient reason, there’s little chance that it will.

That is something worth losing sleep over.