The return of the angry Quebec premier

Normally a picture of serenity, Philippe Couillard is losing his cool in the face of some surprisingly disciplined opposition 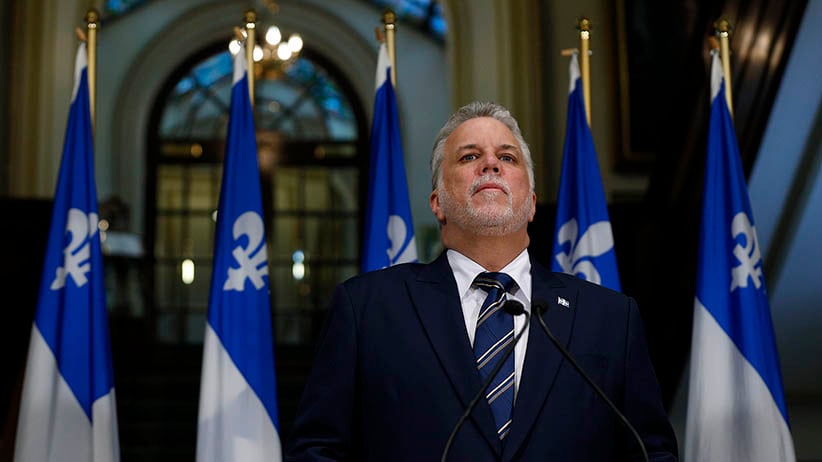 When it comes to righteous indignation, Quebec Premier Philippe Couillard has nothing on his predecessor Jean Charest. A lawyer by training, Charest had a prosecutor’s flair for the theatrical that served him well throughout his nearly three decades in politics. He made a show of being angry, all clipped sentences, stabby fingers and smouldering blue-eyed fury.

Charest could go from bonhomme to buzzsaw in a flash. This happened with increasing frequency in the last five years of his tenure as premier, as corruption gnawed at the foundations of the Liberal Party of Quebec. Couillard, by contrast, is the personification of his beard: stately, comforting and as gray as porridge.

What, then, to make of Couillard going full buzzsaw at the recent Liberal convention? It was an unusually punchy Couillard who faced journalists who won’t stop pointing out the waft of corruption emanating from his party. This year alone, Liberal MNA Sam Hamad was forced to resign from cabinet following an alleged cash-for-access scheme that saw Hamad give privileged information to one of his biggest fundraisers. More recently, as reported by Radio-Canada’s Enquête, three stalwart Liberal fundraisers allegedly received cash payouts resulting from the sale of government properties. Among those identified in the Enquête investigation: William Bartlett, who served on Couillard’s 2007 re-election campaign.

“I’ve been leader of the Liberal party since March 2013, and premier since 2014, and I defy anyone to show me an example of a practice that is anything but irreproachable and correct in the party or the government,” Couillard said.

This is both piss-and-vinegar and slight of hand on the premier’s part. He’s technically correct, as all the alleged shenanigans occurred before he became party leader. Couillard made the declaration, which amounts to a dare, after a  40-minute speech in which he painted his opponents as dangerous xenophobes who disdain immigrants and hate Canada. Parti Québécois leader Jean-François Lisée was “disgraceful” and a “propagandist.” Coalition Avenir Québec leader François Legault was nothing short of “Donald Trump.” The only bulwark against these monsters, Couillard intoned, was Couillard himself. Cue his smile, and a reminder to vote Liberal.

Couillard’s Liberals are midway through their four years in power. As if on cue, the party has halted its austerity measures and begun backloading the mandate with spending announcements and bromides to the middle class. Charest was a champion of this, and until the 2012 election it worked like hell. Personally unpopular throughout much of his tenure as a provincial politician, Charest nonetheless won three straight elections and governed for nearly a decade.

Yet Charest benefited greatly from a few bedrock Quebec truths that are eroding under Couillard. It might be why our current premier, usually the picture of serenity, is suddenly making a show of being angry. After all, anger is a cousin of panic.

The Liberals have used Quebecers’ fear of a referendum on Quebec sovereignty as an electoral cudgel against the Parti Québécois for over 40 years. It has been a remarkably effective tool, particularly in the wake of the 1995 referendum. The Liberals have governed for all but 18 months of the last 16 years, in large part by raising the spectre of a referendum during a PQ government.

The PQ’s Lisée, crafty as always, is attempting to put an end to this particularly effective Liberal talking point. He said he wouldn’t hold a referendum during a first mandate of a PQ government. What he would do to foment interest for such a thing in a second mandate is a matter for Lisée’s political strategists and perhaps an army of psychotherapists. But in reneging on Quebec sovereignty, even in the short term, Lisée removes a potent and longstanding Liberal weapon.

Lisée has wisely sidelined his party’s obsession with so-called “identity issues,” which include state secularism and the place of religion in Quebec society. In a recent interview with La Presse, Lisée said the next PQ campaign will be on the economy, health and education.

It’s crass politicking on Lisée’s part, given how he literally wrote the book advocating the disenfranchisement of recent arrivals to Quebec. Nonetheless, it blunts another enduring Liberal talking point: that the PQ is but a repository for closed minded pure laine types.

The Liberals have traditionally benefited from the split in the francophone vote, particularly in and around Montreal, where the upstart lefty Québec solidaire has leeched support away from the PQ. To counteract this, the PQ instituted talks with QS in hopes of running a single candidate against the Liberals. If the two parties are able to do so—and it’s a gigantic if, given Quebec solidaire’s general disdain for Lisée and the latter-day PQ—the political spoils are significant: in 51 of the province’s 125 ridings, the combined PQ and Québec solidaire vote was enough to win the seat, according to data from Quebec’s election authority.

Outside of Montreal, Lisée has set his sights squarely on the CAQ, Quebec’s right-of-centre nationalist party. Led by Legault, himself a former PQ cabinet minister, the party is a respite for frustrated separatists and federalists alike. In the ultimate insult, Lisée has said he considers Legault, not Couillard, as his main political foe.

Traditionally, the Liberals are as ferociously disciplined as the PQ is a redoubt of soap opera intrigue and frequent coup d’états. The roles have since reversed somewhat. The PQ has so far stood behind Lisée—though he’s only had the job for just over a month. Under Couillard, the Liberals are in deep trouble, with dwindling membership rolls, missed fundraising targets and a “free fall amongst party activists.”

All this came to light thanks to a leak of a confidential report to La Presse’s Tommy Chouinard earlier this month. It’s difficult to tell which is worse: the unhappy lot within his party, or that someone would dare leak news of this unhappiness to the press. Either way, Philippe Couillard has every reason to be angry these days.