The scary reality of terrorism in Canada

It took luck and a tip from the FBI to stop Aaron Driver. The peace bond restriction on him was, in the end, just a piece a paper. 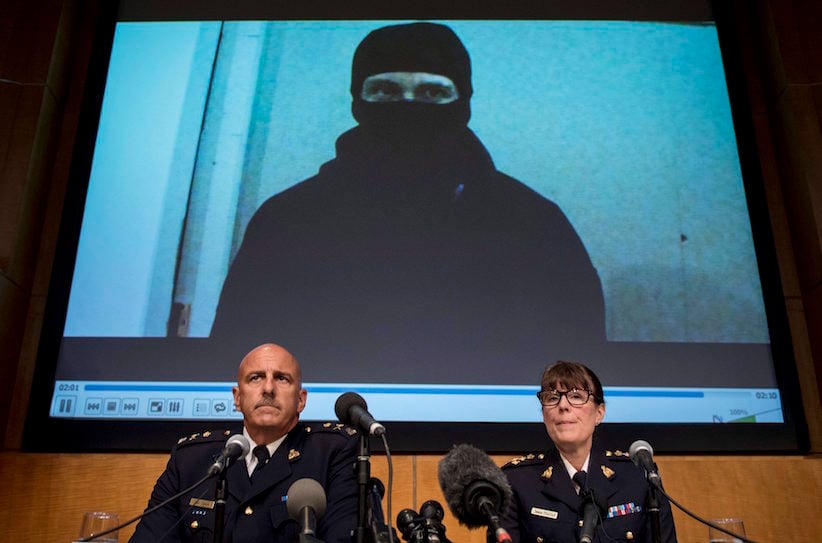 Video footage showing Aaron Driver is seen behind RCMP Deputy Commissioner Mike Cabana (left) and Assistant Commissioner Jennifer Strachan during a press conference for what the RCMP are calling a terrorism incident, in Strathroy, Ontario yesterday, on Thursday, Aug. 11, 2016 in Ottawa. THE CANADIAN PRESS/Justin Tang

The phone rang at 8:30 Wednesday morning—and from that moment, the clock started ticking. “A race against time,” to borrow the words of RCMP Deputy Commissioner Mike Cabana.

On the other end of the line was an agent with the Federal Bureau of Investigation, calling to warn the Mounties about a chilling discovery: in a dark corner of the Internet (exactly where has yet to be disclosed), the FBI stumbled upon an ISIS-inspired martyrdom video, starring a mystery man wearing a black balaclava. The would-be terrorist was planning an “imminent” attack, the agent said, location unknown.

“Oh Canada, you received many warnings,” says the masked man, his camera rolling. “You were told many times what will become of those who fight against the Islamic State…There is a fire burning in the chest of every Muslim, and this fire can be cooled only by the spilling of your blood.” He finishes his two-minute rant by pledging allegiance to Abu Bakr al-Baghdadi, the leader of Islamic State, who “has called for jihad in the lands of the crusaders.”

“I’m responding to this call,” the man says.

Over the next two hours, the RCMP and CSIS, Canada’s spy agency, pored over hundreds of photos in their investigative files, scrambling to figure out the man’s identity—and where he might be. By 11:00 a.m., authorities were fairly certain they’d found their match: Aaron Driver, 24, a Saskatchewan-born Muslim convert who was anything but a stranger to Canada’s national security apparatus.

Many people did not die on Wednesday because police and spies did their jobs in rapid time, swooping in to prevent a catastrophe. Driver, it turned out, was on the verge of attempting mass murder, and when he called for a taxi at 4:00 p.m.—explosives in tow—heavily armed officers were camped outside his house, ready to take him down. “Some amazing work went on,” said RCMP Assistant Commissioner Jennifer Strachan. “The fact that a call happened at 8:30 in the morning, and by 11:00 we feel we had someone identified and we were moving on it, to me is incredible. The sure fact was: if he had gotten out of that residence before we got there, the scenario would have ended a lot of differently.”

Of course, it also would have ended a lot differently if Aaron Driver hadn’t been arrogant and careless, posting his videotaped pledge in advance of his planned attack. Or if the FBI had never noticed the video in the first place, prompting that life-saving tip. Dogged police work saved the day, no doubt, but so did a good bit of luck.

“Let’s look at this from the positive side and the not-so-positive side,” says Phil Gurski, a former intelligence analyst at CSIS, and the author of The Threat from Within: Recognizing Al Qaeda-Inspired Radicalization and Terrorism in the West. “The positive side is that the FBI is an amazing partner of the RCMP and CSIS; it is an excellent relationship and there are constant exchanges of intelligence. But I can only imagine that in the highest echelons of CSIS and the RCMP, there is a lot of soul searching: ‘OK, we’ve done good. But what did we miss—and how can we ensure we don’t miss it next time?’ ”

Like the video, for example. It’s now clear that no official on the Canadian side of the border had any idea that Driver—an Islamist extremist well-known to police, arrested last year on suspicion of terrorism, and living under a court-ordered peace bond in small-town Strathroy, Ont., where he was forbidden (theoretically) from possessing explosives or using the Internet—had filmed his final words and was poised to target innocent civilians. At a press conference Thursday afternoon, Deputy Commissioner Cabana was asked the obvious question: Why did it take a tip from the FBI to stop a would-be terrorist in Canada, and what does that say about our country’s ability to combat terrorism?

He is right. Every day, both nations share valuable, sensitive intelligence, and although most exchanges never make headlines, it’s safe to assume the FBI has thanked the Mounties more than once for a timely tip. Still, the bigger issue remains: regardless of who found the video, it led Canadian authorities straight to a man who was already on their radar—a self-admitted ISIS sympathizer who posed enough of a potential threat that he was slapped with parole-like conditions aimed at keeping him contained. How, then, did he come so close to killing so many? Was nobody watching this guy?

Like so much else in the murky world of anti-terrorism, the answer is hardly simple. Bottom line: Aaron Driver was one of many, many suspects known to CSIS and the RCMP, and monitoring each one, full-time, is wishful thinking, even if they are bound by the restrictions of a peace bond. “If the suggestion is that Mr. Driver was under constant surveillance, I can tell you that was not the case,” Cabana told reporters. “Mr. Driver was one individual among others that have potentially criminal intentions, and our ability to monitor people 24 hours a day and seven days a week simply does not exist. We can’t do that.”

The only surefire way to thwart a terrorist attack is to jail said terrorist, but criminal charges require a high threshold of proof that is extremely difficult to meet (beyond a reasonable doubt). The Criminal Code does allow for temporary “preventive detention” in urgent circumstances, but it’s not clear whether police have ever exercised that power. The other alternative (though definitely not foolproof) is a peace bond, like the one Driver was supposed to follow.

Used increasingly in anti-terror cases (nearly 20, at last count), peace bonds allow police to impose strict living conditions on a suspect without having to meet a high burden of proof. Authorities must simply convince a judge that they have reasonable grounds to believe a person may commit a terrorist offence, and if the court agrees, it will impose bail-like conditions on the target before setting him free.

In Driver’s case, there was plenty of evidence to warrant such a bond: Twitter posts praising ISIS atrocities. Frequent online contact with other well-known extremists. A recipe for homemade bombs stored on his hard drive. Speaking to the Toronto Star in early 2015 (under his pseudonym, Harun Abdurahman), Driver justified the October 2014 terrorist attacks that killed one soldier near Parliament Hill and another in the parking lot of a Quebec mall. “They weren’t attacks on civilians or attacks on women and children,” he said. “They were attacks on uniformed soldiers and members of the government.”

Arrested in June 2015, his original bond dictated that he wear an electronic monitoring bracelet and attend religious counselling. But his lawyer filed a constitutional challenge—and won—convincing a judge that Driver should not be forced to undergo such counselling. In February, a new peace bond was issued; Driver was no longer required to wear the monitoring device, but he had to keep the peace, stay off social media, avoid firearms and explosives, and refrain from speaking to anyone with links to Islamic State. Living with his sister in Strathroy, he also had to report to police twice a month.

In hindsight, those stipulations were nothing more than a piece of paper. The peace bond did not stop Driver from going online, getting in touch with ISIS associates, and acquiring explosives. “We have to ask ourselves a very serious question: Are peace bonds a sufficient tool to deal with terrorism?” Gurski says. “What does this mean for the other guys on peace bonds? Are they going to reassess those? We did a good job this time, but what if he’d gone through? What if he’d been successful?”

Here’s another difficult question: Realistically, what more could authorities have done? Driver’s behaviour was alarming enough to pursue that peace bond, but until he donned his black balaclava and pressed record, his behaviour never ventured into criminal territory worthy of charges. And with finite resources—and a long list of ever-evolving threats coming to their attention—CSIS and the RCMP can’t give each one the same undivided attention.

Translation: there are other targets out there considered far more dangerous than Aaron Driver.

Anti-terrorism is hardly an exact science, and never will be. Police officers and intelligence analysts are constantly assessing and reassessing what they know, what they don’t know, and what falls in between—and for the most part, Canada’s national-security apparatus has a record worth boasting about. And yes, sometimes even the best can use a little luck.

Ralph Goodale, the Liberal minister of public safety, probably summed it up best during his Thursday news conference: “I want to thank the FBI for their assistance.”