Thirteen-year-old Peter Goreham was tucked in bed in his pajamas on a quiet October night. Thirty minutes after midnight, a fluorescent light pierced through his curtains, luring him to the window. The light slid into place and hovered above the treeline. It was too bright to be a spotlight, too silent to be a helicopter, and too bewildering to ever forget. “There was no reason for the light to be there.”

Just beyond the 400-person town of Shag Harbour, N.S., the closest road was nearly a kilometre from Peter’s window. He knew the light could be neither a car nor a streetlight, and the moon was slender that Oct. 4 night.

“A whistling, tumbling sound got louder and louder,” describes Peter. “Something was free-falling, and I prepared for it to hit the house.” Fifteen seconds later, the light shot off, accelerating from 0 to 4,000 km/h in an instant, according to pilots who say they witnessed it from the air. “Remember, this is in 1967,” says Peter. “This is not conventional.”

Eleven witnesses reported the incident to the RCMP, saying they had seen a plane crash. Coast Guard officers and divers searched until 3 a.m., then resumed the search at daylight. In the midst of the Cold War, American troops soon arrived, with pilots, more divers and a massive barge. Although none of the witnesses suggested the vessel could be extraterrestrial, the government’s conclusion was outlined in a report entitled, “Canada’s UFOs: The search for the unknown.”

Two books have been published on the incident, each asking just as many questions as they answer. Search units found a 600-m piece of orange foam floating in the water, but there was no slick of oil or other debris to indicate a plane had gone down. Other witnesses include a fisherman who caught a metallic vessel on his radar, along with a crew of pilots who piled into the cockpit to marvel at it and adjust their course from colliding.

The morning of the incident, Peter described his sighting to his parents and the RCMP, but he told nobody else for decades. “When you mention extraterrestrial, people don’t go for that,” he says. “You become a target, and people label you.” However, when a ufologist came to Shag Harbour in 2013, Peter knew that coming out as a witness would help the investigation. “When you sit on something for 40 years without answers, it gets to you.” 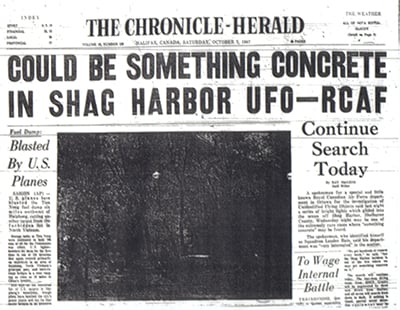 In the timeline of the incident, chunks are still missing. Peter has no definite explanation for the tumbling sound from the sky, nor the source of piercing light. He is now a member of the Shag Harbour Incident Society, speaking at symposiums in hopes of finding the truth. He also helps manage the Shag Harbour UFO Incident Museum, which attracts about 2,500 visitors each year.

Although he rarely talks about the incident with his family, the memories hover in his mind. “A lot of life has gone by since then,” he says. “But still, nothing can ever surprise me.” — Meagan Campbell