The steel behind Eugenie Bouchard's smile 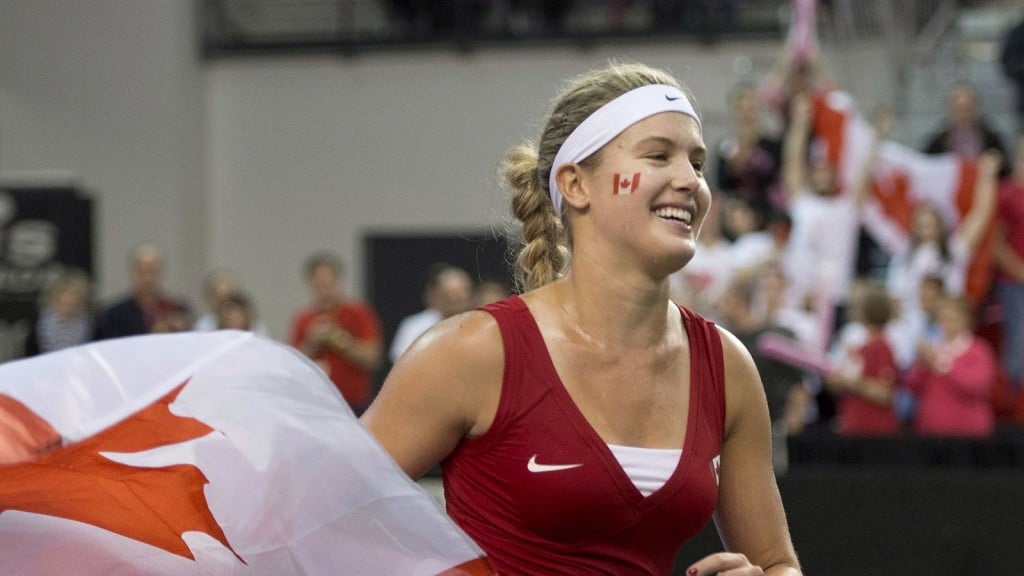 THIS IS HOW we want them now.

Ever since the sea change that was the 2010 Winter Olympics, Canadians have developed a taste for the cutthroat, at least when it comes to the athletes who represent us. All that deferential, good-try, just-happy-to-be-here stuff went out the window during those remarkable 17 days in Vancouver and Whistler, replaced by a less familiar version of ourselves. Turned out we really prefer to win, we prefer gold to silver or bronze or a personal best, and we really don’t care about the hurt feelings of those left to eat our dust.

All of which makes Eugenie Bouchard the perfect fit as Canadian sport’s poster woman in 2014. She’s very good, she’s very confident, she’s single-minded and she takes no prisoners—and that’s why she seems poised to go where no Canadian tennis player has gone before.

This year has already featured a first WTA tournament win for Bouchard, in Nuremberg, and two Grand Slam semifinals: in Melbourne in January, where she lost to eventual champion Li Na, and in early June at Roland Garros, where she lost a tough three-set match to Maria Sharapova, who went on to beat Simona Halep in the final.

There are legitimate comparisons being made to Carling Bassett, who during her teenage heyday between 1983 and 1986 reached the U.S. Open semifinals and rose as high as No. 8 in the world, the best ever for a Canadian.

But there’s a difference.

Bouchard is a little older—she turned 20 in February—but she is also emerging as a force on the world stage at a time when the women’s tour is wide open. Bassett’s prime coincided with the best years of Martina Navratilova and Chris Evert, and came just before Steffi Graf took over the women’s game. That was a ceiling she’d never crack. And she had interests outside of tennis—she modelled, made a movie and appeared in The Littlest Hobo. Her celebrity in Canada, which was considerable, wasn’t conditional on becoming the best tennis player in the world, and the truth is, no one really expected it. Being good and being ours was more than enough.

The Williams sisters, who at one point seemed like an evolutionary step, turned out instead to be true outliers. No other women have emerged who can match their physical tools, and with Venus pretty much done and Serena perhaps in decline (if you can say that about a player who won two of the four Grand Slams last year, and who when she’s on and she’s healthy and she feels like it, can still beat anyone) there is no one else capable of dominating the game. Instead, it’s a mixed bag of old and young. There have been six different winners of the past eight Grand Slams, and this year, only two players reached the quarters of both the Australian and French Opens.

Bouchard was one of those two, yet in reaching the final four in both tournaments, she didn’t have to beat a player ranked higher than No. 9 in the world.

That stands in sharp contrast to the men’s side, where the similarly driven Milos Raonic has reached the top 10 during a golden era, featuring the primes of Rafael Nadal, Novak Djokovic and Andy Murray, as well as arguably the greatest player in history, Roger Federer, who is still a force even as he enters the twilight of his remarkable career. If it feels like Bouchard has surpassed Raonic, it’s worth keeping that in mind.

But you can only beat those they put in front of you, and that’s what Bouchard has been doing, putting to rest any suggestion that she is just a pretty face. Anyone who has watched her evolving game immediately comes to understand the steel behind the smile. Bouchard is a dogged competitor. She says there is no room for friendships on the tour because those potential pals are the ones you have to beat. (Her coach, Nick Saviano, groomed Jim Courier and Jennifer Capriati, players not exactly known during their careers as Mr. and Ms. Congeniality.) After losing to Sharapova in Paris—a match Bouchard seemed entirely capable of winning until a couple of key games turned the tide—there was no celebrating what was a historic Canadian achievement on the famous red clay, no acknowledgement that this is just the beginning, that there will be more opportunities as Sharapova and her generation ride into the sunset, that she’ll be in the top 10 very soon, that there will surely be other chances at future Grand Slams.

No, Bouchard looked ticked. She’d lost. She wanted to win. She expected to win, which in sport is the only path to greatness.

Think back to Vancouver.

We’ve seen that look before. And we like it.