The story of the strangers who tried to save Cpl. Nathan Cirillo

Barbara Winters, Margaret Lerhe and others bonded together to help Nathan Cirillo in his final moments at Ottawa's War Memorial 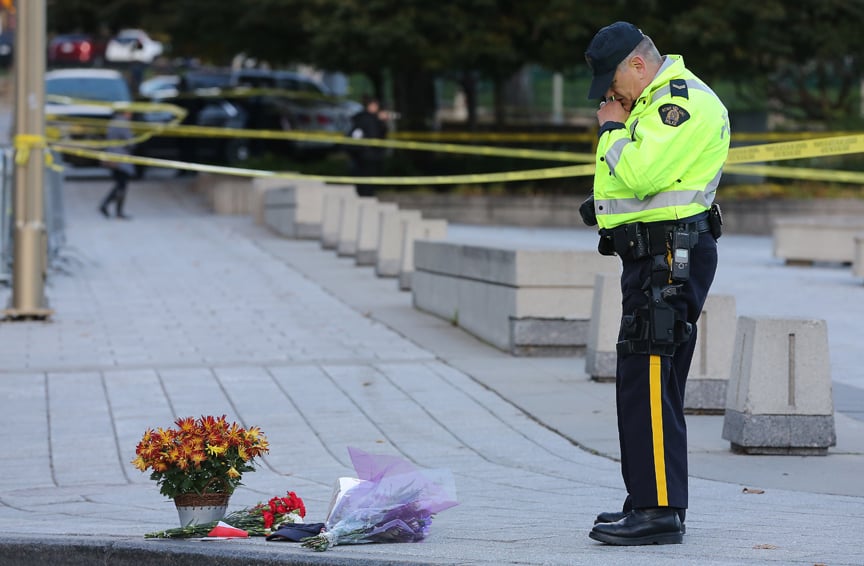 A RCMP officer looks at floral tributes to Cpl. Nathan Cirillo. Police continue to investigate in the aftermath of a shooting in Ottawa, where a soldier murdered at the War Memorial and a gun battle in Parliament killed the alleged gun man. in Ottawa. October 23, 2014. (Steve Russell/Toronto Star)

OTTAWA — Lawyer Barbara Winters was headed to a meeting Wednesday near her office at the Canada Revenue Agency when she passed the National War Memorial, stopping to snap a few pictures of the two honour guards standing soberly at attention.

Moments later, after passing by a Canada Post office at the corner of Elgin and Sparks streets, she heard four shots. For Winters, a former member of the Canadian Forces Naval Reserve, the sounds were unmistakable.

Turning, she saw people on Elgin Street ducking. She began to run — not towards safety, but towards the shots, and the wounded soldier lying at the foot of the memorial.

As Winters ran, she looked for — but couldn’t see — the two soldiers. Her mind went to the hit-and-run death in Quebec of Warrant Officer Patrice Vincent two days earlier, and she instinctively knew the honour guards had been targeted.

As she reached the memorial, Winters saw four people bending over a fallen soldier. She dropped her purse and briefcase on the steps and began to help.

Margaret Lerhe, a nurse on her way to work at the Elizabeth Bruyere Hospital, was pressing her hands to a wound on Cpl. Nathan Cirillo’s left side to stanch the bleeding.

Another corporal, a third member of the honour guard who accompanies the two standing at attention, was on Cirillo’s right side, pressing his hands to a wound there.

Another soldier was bent over Cirillo’s head, talking to him.

Related:
How the terror unfolded in Ottawa
Remembering Cpl. Nathan Cirillo
Ottawa shooting: In the shadow of the Toronto 18
Interactive timeline: What happened in Ottawa

The group began calling for an ambulance, and for police. Winters began to pray, reciting the Lord’s Prayer. She talked to Cirillo. He was conscious; his eyes were open, and he was staring straight ahead. She felt that he could hear her.

Someone — Winters can’t remember who — said the soldier had stopped breathing.

They began trying to find a pulse, one feeling his neck, one his wrist. Remarkably, everyone on the scene had First Aid or medical training. Instinctively, they began operating as a team, talking and encouraging one another.

They began CPR. The soldier at Cirillo’s head started mouth-to-mouth respiration. Winters began compressing Cirillo’s chest. She asked that the man holding Cirillo’s legs lift them higher. Lerhe, the nurse, coached Winters on the compressions, reassuring her that they were strong.

After a time, someone else relieved her on the chest compressions, and Winters moved to Cirillo’s head. She talked to him, comforting him.

“You are loved. Your family loves you. You’re a good man,” she told him.

Winters told Cirillo to think about what he was doing — that he’d been standing guard at the National War Memorial. She told him what a good man he was for doing his duty.

She didn’t see a wedding ring, and didn’t know if he was married. So she just kept repeating:

The impromptu team kept waiting for an ambulance, desperately willing Cirillo to hang on.

“You are so loved,” Winters told Cirillo. “We’re all trying to help you.”

Sirens signalled the arrival of the paramedics. The soldier at Cirillo’s head stood up to give them access. Winters took over doing mouth-to-mouth, her body prone over Cirillo’s, her feet resting on the fallen soldier’s empty rifle.

The paramedics cut open his clothes to assess the injuries, took over the chest compressions and put a neck brace on him. As they worked, Lerhe relayed information about his injuries.

But Cirillo died in the arms of the people working so hard to keep him alive.

Winters does not think she did anything extraordinary by running towards the sound of the shots. She is shaken by the experience, but full of praise for all of those who worked to help.

She has complete admiration for the courage of her fellow helpers, who worked steadily despite the possibility of the danger from another gunman.

Afterwards, Winters remembered the actions of other women who went to the aid of another dying soldier — Lee Rigby, murdered in southeast London in 2013. As Rigby lay bleeding, several women persuaded his killers to let them go to him. One sat beside him and held him.

Winters did what most people would do, she says.

“When you are dying, you need to be told how loved you are.”