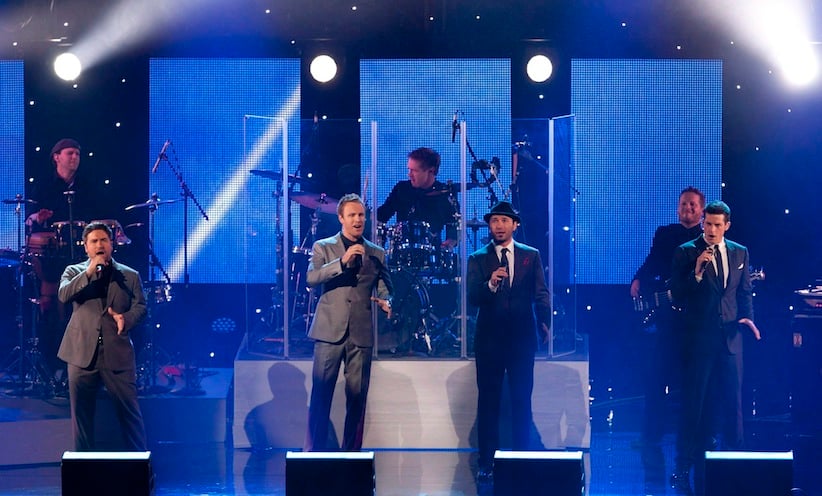 The Tenors perform during the 25th anniversary celebration of the Rick Hansen Man in Motion relay in Vancouver, B.C., on Tuesday, May 22, 2012. The Tenors changed some of the lyrics of O Canada as they made a political statement while singing the national anthem at Tuesday night’s MLB all-star game. THE CANADIAN PRESS/Jonathan Hayward

Remember that whole months-long political brawl to change two words in the Canadian anthem? The fight that Mauril Belanger, the longtime member of Parliament dying of ALS, has devoted his days to? You know, the surprisingly intractable fight over changing “all thy sons command” to “all of us command,” to perhaps consider the 18,075,100 Canadians who identify as women?

Well, the Tenors didn’t. They see that argument and raise you a totally bonus inflammatory banner in another heated political debate, with millions of eyes on them.

So here’s what happened: The Tenors, a vocal quartet from Victoria who perform in the vanilla, operatic style of Josh Groban but who, combined among the four of them, lack his charms, were asked to perform the Canadian anthem at Major League Baseball’s All-Star Game. It’s a prosaic job, best done prosaically: all you’re asked to do, and what is expected of you, is to sing a note-for-note, word-for-word performance of the anthem. Straying from that tried-and-true format is how you find yourself on Sportsnet’s blooper reels.

But the Tenors, sensing a political moment, decided to not just stray from the book but read from a different one completely.

In place of the lyrics “With glowing hearts we see thee rise, The True North strong and free,” the group sang instead: “We’re all brothers and sisters / All lives matter to the great,” raising a marker-scrawled sign “All Lives Matter,” before returning to the standard lyrics in French. (A note of pity here for Michael Saunders, the Toronto Blue Jays’ Canadian-born outfielder, who stared blankly into the sun as the camera panned to him during this moment.)

Let’s leave aside what they could have meant by “to the great,” and take a moment to explain why the statement “All Lives Matter” alone here is thoughtless, at best. As a dismissal, or even a response to the statement “Black Lives Matter”—a movement and rallying cry for black communities in America, Canada and beyond who have witnessed, experienced and felt acts of discrimination (both overt and subtle) and are refusing to accept societal norms that have produced police brutality and other acts of violence—it is unworthy. It is a statement that salves the oppressor; it is a sentence that erases the pain by equating that pain to that which is experienced by everyone. It is, as the popular argument goes, the equivalent of telling a neighbour whose house is on fire that all houses matter. It is, as my colleague Jason Markusoff noted on Twitter, the rhetorical equivalent of interrupting those solemnly pausing on Remembrance Day to say “Never forget” with a haughty “No, it should be ‘Never forget all genocides.’ ” Never mind that taking vitriolic offence to the brusque response one often receives to “all lives matter” takes away from the actual issues at hand. “All Lives Matter” is, at best, unhelpful because it refuses to acknowledge that people are different, and some people are hurting right now.

Some may point to U.S. President Barack Obama’s more diplomatic note at the recent NATO summit in Warsaw: “When people say ‘black lives matter,’ that doesn’t mean blue lives don’t matter. That just means all lives matter.” This, it’s worth noting, is a different point than merely saying “All Lives Matter.” That’s because saying “Black Lives Matter” does not mean “only black lives matter”; that’s a flawed premise too, and it’s a defensive reading that refuses to acknowledge that those lives actually do. The conceit of “Black Lives Matter” is about focus, and not about exclusion; the reality that most of North American society has focused expressly on lives that are not black makes this urgent, and makes “All Lives Matter” particularly cruel.

So, back to the Tenors. What does this tell us? We have no statement yet from the group, who likely thought they were doing the right thing by making a political statement. (Update: at 10:10 p.m., the Tenors’ Twitter account released an apologetic statement blaming the act on “lone wolf” tenor Remigio Pereira; Pereira, who “will not be performing with the Tenors until further notice,” also sent a response through his own Facebook account.) And also, it is worth saying that co-opting an entire country’s anthem to make a personal point is, to say the least, selfish and unthinkable.

But here’s what we do know: at the end of the day, despite political efforts in Parliament and productive debate and worthy protests in the street and splashy headlines and deep coverage—a group (or one lone wolf) can still decide to stride onto national TV and change up a national anthem on their terms.

And they didn’t even sing “all of us command.”

Just in case you’ve forgotten, here’s the Barenaked Ladies performing the old 2015 anthem from our Canada 148 project, to show you how it’s done.