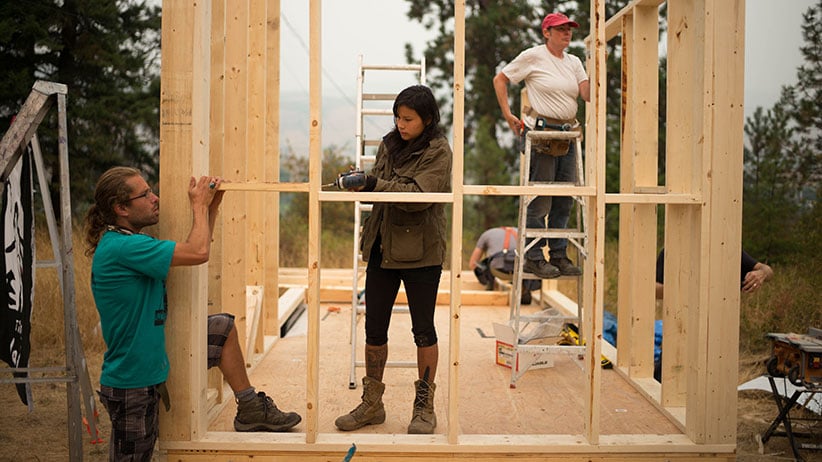 Calling themselves the Tiny House Warriors, a group of Indigenous Secwepemc people and allies from Canada are building a tiny house in the path of the Kinder Morgan pipeline’s planned route through their territory. (Ian Willms/Greenpeace)

Growing up in Secwepemc territory near Kamloops, B.C., Kanahus Manuel knew she’d become a warrior for her people, even if that’s not what her father, Arthur, wanted. He would seat her and her five siblings around a table and lecture them for hours about Secwepemc culture and the ways the Canadian government had robbed them of their land and traditional ways of living. But he didn’t want his children to fight like he did throughout his life as an Indigenous leader and activist. Her father was revered, and Kanahus seems to be picking up where he left off. “We come from a warrior nation,” says Manuel, who is from the Neskonlith Indian Band. “We’re raised like this.”

Last year, Manuel, 41, was among the thousands of water protectors in Standing Rock, N.D., where dozens of Indigenous nations descended to peacefully protest the Dakota Access Pipeline. Police fired water cannons at the protesters through the frigid air, along with tear gas and rubber bullets, and many demonstrators were arrested and held in cells. While on the front lines, Manuel was charged five times and appeared in a North Dakota court in early October (the charges were dropped). But she took away something seminal—an idea. For Manuel, the small houses that were erected throughout the protest camps became the inspiration for a battle much closer to home.

Now, nearly 2,000 km west of Standing Rock, in an Indigenous nation that includes 17 different bands in B.C.’s southern Interior, 10 tiny houses are being built. When they are finished, the Tiny House Warriors, a grassroots group led by Manuel, will place the houses in strategic locations along the 518 km of Secwepemc territory the Kinder Morgan Trans Mountain pipeline must cross to be completed. They’re determined to stop the pipeline, which is expected to transport crude oil from Edmonton to Burnaby. “We want to win this one,” says Manuel. “We want to stop it by any means necessary.”

At an assembly in June, the Secwepemc nation signed a declaration supporting the tiny house project, even though three of its bands have come to agreements allowing Kinder Morgan access. The declaration vowed to uphold Secwepemc law and protect the land and, over four days in September, with funding from Greenpeace, the first 144-square foot, wood-frame house was built. The rest are under construction at a cost of about $5,000 apiece, and each will be solar-powered and insulated. Some will be used for language and cultural camps, or traditional tattooing; others to shelter members of the community struggling to find proper housing.

The unceded land of the Secwepemc (known in English as the Shuswap) stretches from the Columbia Valley to the northern reach of the Fraser River and south to the Arrow Lakes. No treaties were signed between Canada and the Secwepemc and, as has been the case with other developments in the region, no consent given before the federal government approved the new pipeline on the lands and waters known to the Secwepemc as Secwepemcul’ecw.

In the past, when they believed projects threatened wildlife and waterways in their traditional lands, the Secwepemc have been quick to block roads and assert jurisdiction—often with the support of other Indigenous nations from across B.C. This time is no different, says Manuel. “We’re all salmon people,” she says. “You mess with our salmon, you mess with us—we’re going to shut you down.”

Kinder Morgan has already been flagged by activists and environmentalists for installing mats in streams to discourage salmon from spawning in areas where the company intends to build (in September, the National Energy Board ordered the company to stop, as construction hadn’t been authorized).

In a statement to Maclean’s, Kinder Morgan said it supports the right to peacefully and lawfully express opinions about its expansion project: “When it comes to our operating and construction sites, safety is our first priority—safety of our workers, communities and everyone near our work sites.”

But Indigenous leaders are increasingly upset with how the whole process has unfolded. Last year, they note, Prime Minister Justin Trudeau promised a renewed nation-to-nation relationship with Indigenous people, declaring: “No relationship is more important to our government and to Canada than the one with Indigenous peoples.” He promised to uphold treaties and respect the principle of free, prior and informed consent for development as required by the United Nations Declaration on the Rights of Indigenous Peoples. Then, in addition to the Trans Mountain expansion, Trudeau’s government gave necessary federal approvals to the Keystone XL pipeline, Pacific NorthWest LNG project and B.C.’s Site C dam.

Manuel returned from North Dakota in January, just before the death of her father, and believes his passing has inspired a resurgence within the Secwepemc nation. To her, the contradiction between Trudeau’s words and actions hearkens to the 1969 White Paper produced by the government of Trudeau’s father, which many Indigenous people regard as an attempt to extinguish their rights. She’s now inviting supporters from across North America to join the Tiny House Warriors’ fight, à la Standing Rock. “We have the right to say what happens to our lands,” she says, “instead of other people always benefitting from the wealth of our lands.”