The tiny islands where Canada and America are at war

Tensions are rising again over the area called the grey zone, the last disputed lands between Canada and the U.S.—and this time, someone could get hurt 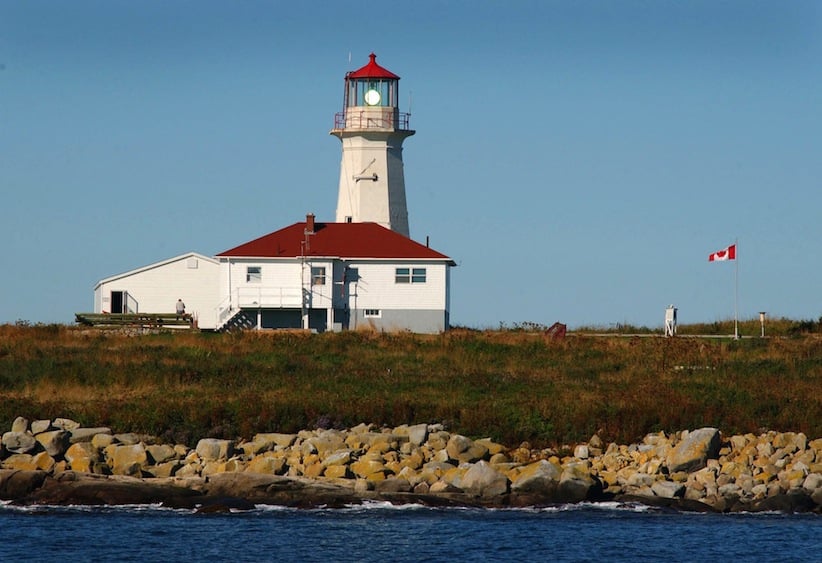 The Canadian flag flutters in the breeze Monday, Sept. 8, 2003, by the lighthouse at Machias Seal Island. The Canadians man the lighthouse on this island claimed by the US and Canada in The Gray Zone waters between the two countries. (Fred J. Field/CP)

Canada is one wrong move away from a border war with the United States—if you believe a group of boiling-mad Maine lobstermen. Unfathomable as armed conflict between Canada and the United States seems, if it’s going to happen, it will be in the ocean between Maine and New Brunswick, where two tiny, treeless islands—North Rock and Machias Seal—are the last remaining disputed lands between the two countries.

The islands have no obvious value. They aren’t strategically located for military purposes and there are no natural resources to be mined. In fact, the islands’ primary residents are 5,800 pairs of nesting puffins. However, the waters around the islands, known by locals as “the grey zone,” because both Canada and the U.S. claim that part of the ocean, contain a lucrative lobster fishery.

The conflict bubbles to the surface every few years, when a bellicose lobsterman on one side or the other gets quoted in the press and sets the other side off. But things are different this year. Due to the high price of lobster, new lobstermen have entered the fray, and they are ignoring unwritten rules that have kept the conflict on a low simmer since 1783. Most of the American lobstermen are from the Maine coast bordering the grey zone, and most of the Canadians are from Grand Manan Island. Both sides admit they have a few hotheads they keep an eye on, but the new lobstermen aren’t from either community, so there is no one to talk them out of rocking the boat.

“Somebody is going to get killed. We’ve had bad years in the past and got lucky, but this is the worst year I’ve ever seen,” says American John Drouin, chair of the Maine Lobster Zone Council district in charge of the grey zone. Drouin fears things are even more dangerous than they were eight years ago, when Maine lobsterman Patrick Feeney had his thumb ripped off. It got caught as he was trying to free his equipment while jostling with a Canadian for territory. Laurence Cook, chair of the Grand Manan Fishermen’s Association’s committee in charge of the grey zone, echoes Drouin’s sentiment. “You can work with some people, but there are assholes on both sides of the border who take things too far,” says Cook, who received a death threat in 2002.

As of the end of June, lobster prices in the Maritimes were at about $5.50 a pound, up from about $4 at the same time last year. The high price of lobster is encouraging non-locals to fish in the area, including reviled “company boats” from Nova Scotia that both lobstermen from New Brunswick and Maine say are aggressive and dangerous. Unlike most boats owned and operated by the same person, company boat operators often come from farther afield, so they don’t know the surrounding waters, and their behaviour is less likely to be tempered by the need to work alongside someone in future years.

The Maine Department of Marine Resources say it regularly patrols the area, and Fisheries and Oceans Canada insists Canadian agencies enforce rule violations—the number of traps, the size of lobsters—by Canadian boats, but local lobstermen on both sides feel the other side regularly breaks the law without any consequences.

Canadian fishermen set lobster traps in the grey zone from July to November. The Americans have a much longer season. Drouin, who has been fishing lobster off the coast of Maine for 37 years, is fed up with what he sees as reckless and unpunished lawbreaking. “Canadians are like Vikings. They’ll rape and pillage and not give a s–t, because they can still go home [after their short season],” says Drouin.

In 2002, Canada decided to permit fishing in the grey zone in the summer months in order to back Americans who were increasingly fishing in Canadian waters. The move was part foreign policy, part local politics, as Grand Manan fishermen were eager to gain access to the grey zone. “The government supports Canadian fishermen fishing in those waters as a means of asserting Canadian sovereignty,” says John Williamson, MP for New Brunswick Southwest, whose riding includes the islands at the centre of the conflict. 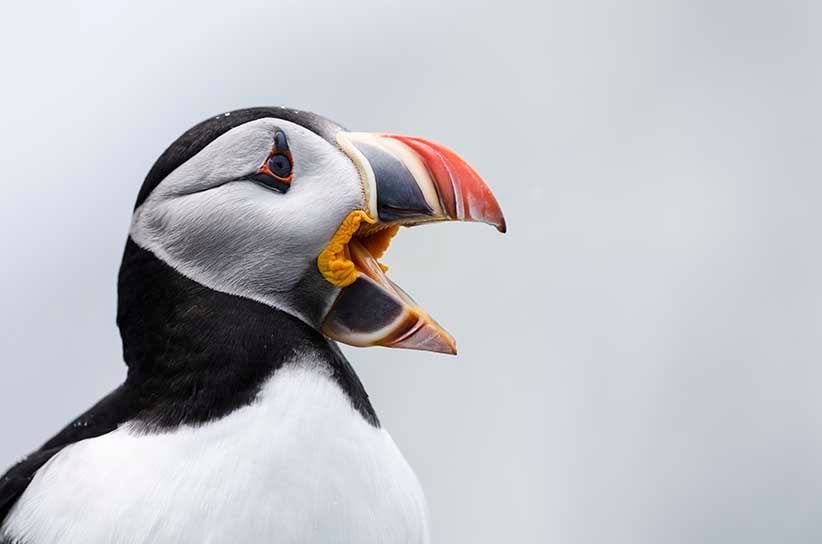 The larger of the two, Machias Seal Island, is a tiny, inhospitable place. Its 0.1 square kilometre is packed with nesting puffins every summer, a handful of researchers who study them, and a lonely lighthouse that has the distinction of being the only manned lighthouse left in Atlantic Canada. On July 2, Parks Canada granted heritage status to 74 lighthouses—including the one on Machias Seal Island. The decision is the latest in a string of subtle moves Canada has taken to assert its claim on the island.

Canadians have manned the lighthouse since 1832. The Canadian government declared the island a migratory bird sanctuary in 1944 and, notably, it’s the Canadian Wildlife Service that enforces the number of tourists who can visit the island each day—15 from the American side, 15 from the Canadian side. In the summer months, a team of scientists under the supervision of University of New Brunswick wildlife ecology research professor Tony Diamond live on the island to monitor the puffins and other seabirds.

Despite Canada’s de facto management of the island and the animosity between the lobstermen, American scientists regularly work with their Canadian counterparts. “Puffins don’t see borders,” says Rebecca Holberton, a biology professor at the University of Maine, who studied puffins on Machias Seal Island with Diamond from 2007 to 2012. Diamond is increasingly concerned about the declining puffin population, which, according to the annual census he just completed, is the lowest it has been since he started counting in 2000.

Stephen Kelly is a retired American diplomat who served in Canada and now teaches at the Center for Canadian Studies at Duke University. He feels Machias Seal Island is largely forgotten in Ottawa and Washington. “All the officials make the right noises about Machias, but, frankly, no one is paying close attention,” says Kelly, an expert in border disputes. He points to how similarly uninhabited islands around the world can become a flashpoint for conflict between nations—even long-standing allies. We already have one example of a seemingly innocuous border dispute gone wrong: Canada’s conflict with Denmark over Hans Island flared up in March 2004, quickly escalating from a war of words to military visits to a visit by then-defence minister Bill Graham to assert Canada’s claim over the island.

“Odds are, [the Machias Seal Island situation] is going to get worse, and there will finally be some incident that forces the governments to take action,” says Kelly, who tried to get both sides to resolve the dispute in 2012, when the price of lobster was low and the situation on the water was relatively calm.

Despite the animosity on both sides, there may be a chance to resolve this dispute—if Washington and Ottawa are willing. The two countries settled a number of similar territorial disputes in the area in 1984 after submitting their claims to the International Court of Justice (ICJ). However, the water surrounding Machias Seal Island was deliberately not included in the court case. According to Kelly, Machias was left off the table due to concerns that one side would get the island while the other got the entirety of the lucrative Georges Bank Fishery. In fact, the ICJ chose to divide Georges Bank between the United States and Canada. Now, Kelly says, the only thing preventing a resolution to the territorial dispute is a lack of willingness to negotiate by the two governments.

Both the Department of Foreign Affairs and the U.S. State Department are quick to assert their claim to the disputed islands. “Canada’s sovereignty over the area has a strong foundation in international law, stemming from 1621,” says Nicolas Doire, a spokesperson for the Department of Foreign Affairs. His sentiments are echoed by Katherine Pfaff, spokesperson for the U.S. State Department: “Our long-standing position is that the Machias Seal Island belongs to the United States by virtue of the 1783 Treaty of Peace.” When asked what their countries were doing to actually resolve the conflict, neither offered an answer.

For John Drouin, that just isn’t good enough. “The politicians can play their games, but we live this conflict every day. The longer they wait, the more likely it is that someone is going to get hurt.”