The judge acknowledged Sidhu's remorse and guilty plea were mitigating factors, but added she had to consider the number of people who died or were severely injured

By Bill Graveland and Stephanie Taylor, The Canadian Press March 22, 2019 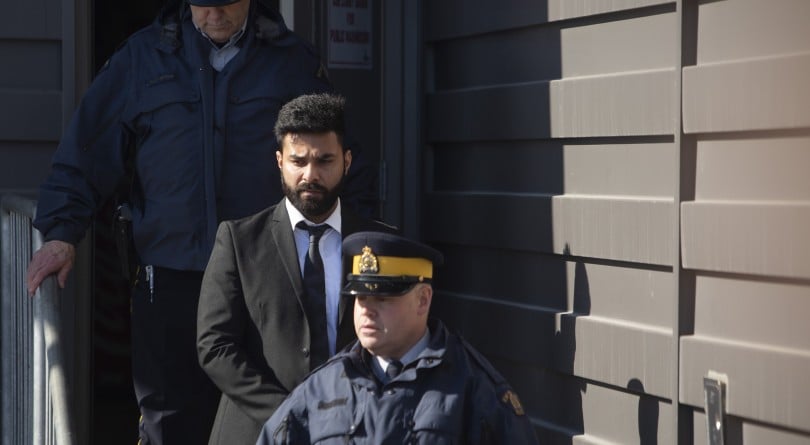 Jaskirat Singh Sidhu is taken out of the Kerry Vickar Centre by the RCMP following his sentencing for the Humboldt Broncos bus crash in Melfort, Sask., on Friday, March, 22, 2019. (THE CANADIAN PRESS/Kayle Neis)

MELFORT, Sask. – The truck driver who caused the deadly Humboldt Broncos crash has been sentenced to eight years in prison.

He stood quietly and looked ahead at the judge as his sentence was pronounced.

Judge Inez Cardinal told court in Melfort, Saskatchewan that she approached the sentence knowing “nothing can turn back the clock.”

She also noted that Sidhu’s remorse and guilty plea were mitigating factors, but added she had to consider the number of people who died or were severely injured and face life-long challenges.

Sidhu barrelled through a stop sign and into the path of the junior hockey team’s bus at a rural Saskatchewan intersection last April.

Sixteen people were killed and 13 were injured.

Cardinal said the collision could have been avoided had Sidhu been paying attention.

She said, “Somehow we must stop this carnage on our highways.”

The Crown wanted the 30-year-old Sidhu to be sent to prison for 10 years, while the defence said other cases suggested a range of one-and-a-half to four-and-a-half years.

Cardinal began her decision by reading each victim’s name aloud.

The judge said the hockey players who died were gifted athletes, while others on the bus were dreaming about families or had already started them.

She said families have been torn apart because of the loss.

Sidhu’s lawyers say he’s likely to face deportation to his home country of India after he serves time.