Scott Gilmore: Poverty, disease and inequality are actually getting worse, not better, reveals a new study. In a thriving Canada, how is this possible? 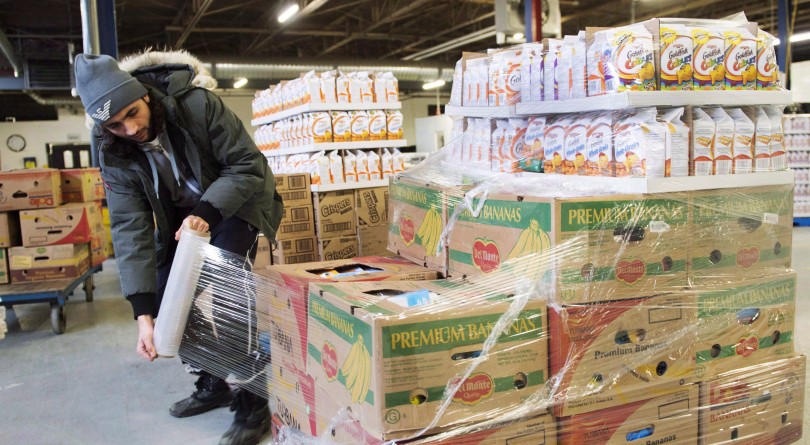 Artem Mousessian wraps a shipment for delivery at the distribution centre for Moisson Montreal, the largest food bank in Canada, Thursday, Jan. 28, 2016 in Montreal. (THE CANADIAN PRESS/Ryan Remiorz)

Objectively, these are the best of times for Canada. We have never been wealthier. The GDP and the stock exchanges are setting records. Our life expectancy just surpassed 82 years—we are living almost a decade longer than we were in the 1970s. The most recent data shows Canada now has the highest proportion of college graduates among all OECD countries. Not surprisingly, we are ranked among the world’s happiest people and only getting happier, according to an annual report released last month.

But a recent study from the Brookings Institution in Washington reveals that this new prosperity is masking another side of the country where poverty, disease and inequality are actually getting worse, not better.

The Sustainable Development Goals, commonly called the SDGs, are a set of objectives adopted by 150 world leaders (including then prime minister Stephen Harper), three years ago at the United Nations. The SDGs include goals such as ending malnutrition, eliminating gender gaps in education, and providing universal access to drinking water–all by 2030.

The fight against poverty in the developing world has been an historic success story over the last 50 years and there is optimism that this momentum will continue, and that these new targets will be met. Canada has been an outspoken supporter, and like most donor nations, is focusing its international aid spending on achieving these goals.

Understandably, a great deal of energy is being spent on tracking progress on the SDGs, most of it focused on developing nations in Africa and Asia. What we haven’t done is consider if we will achieve these goals ourselves. Instinctively we assume that Canada, booming and healthy and among the world’s wealthiest nations, is doing just fine. But the Brookings study shows that not only have we not achieved the SDGs, we aren’t even on course to get there by 2030.

The SDGs are being tracked with 169 different targets. The authors of this study, John McArthur and Krista Rasmussen, examined 78 of these which could be measured quantifiably and determined if Canada had achieved the target, was projected to do so, was lagging, or was going backwards. The results are stunning and question the very notion that Canada is thriving.

Consider poverty. The SDG goal is to cut domestic poverty in half by 2030. Currently, just over three million Canadians live in poverty, and that number is barely falling. In terms of ending hunger, we are actually going backwards. The share of the population suffering from food insecurity is rising (from 7.1 per cent in 2008 to 7.8 per cent in 2012, according to Statistics Canada), as is the rate of malnutrition.

In terms of education, one in 10 students aged 15 years old lack basic numeracy and literacy, and this is getting worse. According to this study, the implications are that between three and five million Canadians have fundamental skills gaps for the modern economy.

One of the most damning findings is that Canada has failed to achieve universal access to clean water, and the situation is only getting worse. The World Health Organization reports that as of 2015, over half a million Canadians do not have clean drinking water and 70,000 are without access to sanitation.

There are similar stories to be found across many of the SDGs. The number of Canadians who can afford housing is shrinking. Access to safe, green public spaces is falling. Income inequality is growing. The percentage of detainees who are awaiting trial has increased. We are lagging in gender violence, child abuse, addiction and biodiversity.

How is this possible? The answer is in the details. The study broke down the numbers and revealed that while the vast majority of us have never been better, we are leaving behind entire communities. For example, child poverty rates among First Nations, Métis and Inuit are more than double the national average and worse yet on reserves. For them, access to doctors is dramatically lower, literacy rates lag far behind and rates of violence are far higher.

Another community being left behind is immigrants. While the differences are not as extreme, new Canadians are much more likely to be going hungry, are less healthy, and lag significantly in literacy rates.

Most Canadians are doing extremely well, but we must remember that rising national averages can be very misleading. Even when most of us are thriving, many of us are still struggling, badly. But we don’t see them in our sunny national statistics or in our growing cities. They are literally out of sight, in remote northern and rural populations, or among isolated immigrant communities where they are enduring levels of poverty comparable to developing nations overseas.

Consider these facts when our politicians brag about economic growth, or promise more middle class tax cuts. Remind them that we first need to help the Canadians we’ve forgotten and left behind. Until we do, we should not be proud of our growing prosperity, but embarrassed.