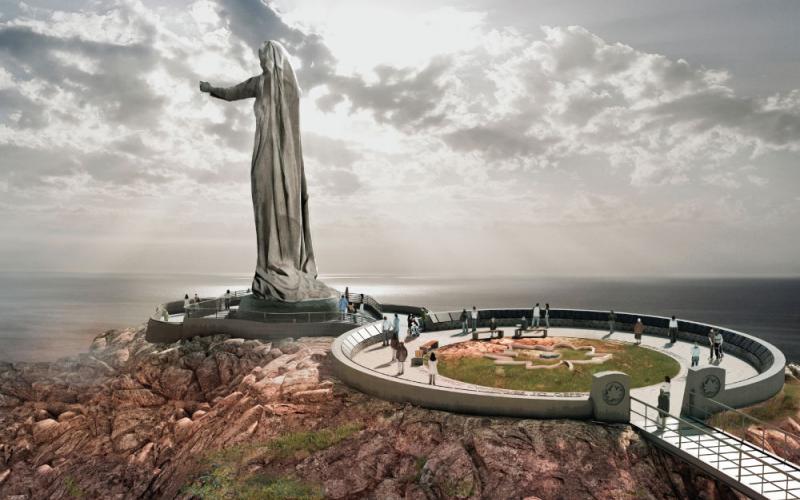 Rhadie Murphy has spent her life on the rugged coastline that snakes along Cape Breton’s northern flank, its pink granite rocks stretching out near her home in the heart of Ingonish.

The 72-year-old is unreserved in her pride and praise of the small community on the eastern edge of the Cape Breton Highlands National Park, calling that piece of the Cabot Trail “the most beautiful place in the world.”

So Murphy and her large family were left shaking their heads in bewilderment when their tranquil hometown took centre stage in a fractious debate over Mother Canada, the towering war monument that could adorn their shoreline.

“I’m 100 per cent for it, oh God yes. It’s the ideal location and it’s a good way to respect the veterans,” she said from her home about a kilometre from the proposed site in Green Cove.

“It will be good for the community and make jobs. I can’t see that little spot that they’re talking about hurting the environment. Why they’re making such a fuss over this I don’t know.”

The 24-metre statue depicts a doleful woman with her arms outstretched toward Europe and the Canada Bereft monument at Vimy in France. The draped figure, meant to embrace soldiers who never returned from distant conflicts, is the brainchild of Toronto businessman Tony Trigiano who was struck by the number of young Canadians buried in a European cemetery he visited.

It has attracted the support of the federal government and Canadian luminaries, including a former prime minister, business heavyweights, prominent journalists and the president of the Calgary Flames.

But the ambitious project has cleaved opinion across the country, with many saying it has no business in a national park and that it cheapens the memory of the war dead who are already commemorated at hundreds of less audacious sites.

It has elicited both praise and hyperbolic condemnation, with one national newspaper calling it grotesque, redundant, bombastic, and offensively tasteless, showcasing “an approach to art best left to Stalinist tyrants and theme-park entrepreneurs.”

However, little of the hubbub has moved the 1,000 or so residents who will live in its shadow.

“It’s going to bring a lot of people into the area and they’re going to need food, accommodations and gas and it’s going to be a big boost to the economy around here.

“I think we’d be very foolish to just throw it away.”

Warren, 59, says much of the concern over its environmental impact is coming from outside the immediate community, which has seen schools and businesses shut down as the economy falters and young people leave to find work.

Critics say it is proceeding without proper public consultation, environmental scrutiny or full funding from the private interests involved, raising concerns that taxpayers will be on the hook for what could be a $60 million bill.

They also insist it contravenes Parks Canada’s core mandate to not cause environmental damage and, rather, preserve “nationally significant examples of Canada’s natural and cultural heritage.”

The Atlantic Geoscience Society pressed the matter in a letter to the MP for the area, saying the Green Cove headland is of such geological significance that it is being considered for a provincial geoheritage designation.

And in a letter to federal Environment Minister Leona Aglukkaq, 28 former Parks Canada managers said the project — with an interpretive centre, snack and gift shop, theatre and steel walkway — does nothing to enhance the site’s ecological integrity.

Sean Howard of the Friends of Green Cove said his group is not opposed to the monument, but wants it placed somewhere else. He takes exception to the fact that Parks Canada gave Trigiano’s group a $100,000 grant even as it assessed the project’s environmental impact.

“You can’t do something that degrades the ecological integrity of the site, and pouring concrete over half-a-billion-year-old rock doesn’t enhance the integrity — it destroys the site,” he said.

Supporters, like retired Maj.-Gen. Lewis MacKenzie, have defended the choice of location and cite other memorials that have gone up in national and provincial parks, which are also home to hotels and ski resorts.

He said he’s disappointed it has attracted so much negative attention.

“This area was one of the last sightings of Canada as hundreds of thousands of troops left Sydney and Halifax,” he said in an interview. “So there’s a lot of emotion wrapped up in that particular part of Canada.”