The Whatcott case: Drawing a line between free speech and hate - Macleans.ca 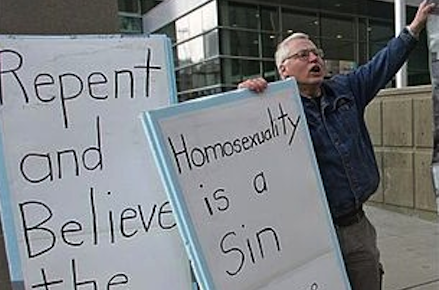 The Supreme Court has drawn a line between free speech and hate speech, but it did so with a slightly shaky hand.

The length of time it took the Court to provide a constitutionally acceptable approach to identifying hate speech—504 days from the hearing of the case to today’s decision—suggests spotting an “unacceptable” level of hate isn’t as straightforward as the justices seem to think.

At issue in today’s ruling were flyers distributed by William Whatcott containing a vile attack on gays that suggested exposure to homosexuals would “lead to the early death and morbidity of children,” among other odious beliefs. While no thinking person would find such thoughts acceptable on a moral level, whether the expression of such thoughts should be subject to state sanction presents a fundamental constitutional issue relating to freedom of expression under the Charter of Rights. The Court found that two of his four pamphlets fall under the Code.

Today’s decision keeps in place part of the Saskatchewan Human Rights Code that prohibits expression “that exposes or tends to expose to hatred, ridicules, belittles or otherwise affronts the dignity of any person or class of persons on the basis of a prohibited ground.” The decision also largely upholds the most relevant precedent (the 1990 Taylor case), but with a few changes that narrow the definition and application of “hatred.”

First, drawing largely on the Taylor case, the judges confront the obvious problem that emotion is central to a person’s reaction to speech, and that an approach that interprets “hatred” should not be premised simply on eliminating feelings of dislike. The purpose of the legislation is to prevent the risk of harms associated with “extreme” examples of speech, such as discrimination. The Court settles on “detestation” and “vilification” to describe the harmful effects (abandoning a third word from the Taylor case, “calumny,” as unnecessary).

Second, the Court emphasized that the focus should be on the effects of the speech, rather than on the nature of the ideas expressed. “If the repugnancy or offensiveness of an idea does not exclude it from Charter protection under s.2(b), they cannot, in themselves, be sufficient to justify a limit on expression.” Thus a blanket prohibition on hateful ideas would clearly be contrary to the core of freedom of expression. The distinction drawn here is between such expression and expression “which exposes groups to hatred.”

Finally, the judges find that the phrase “ridicule, belittles or otherwise affronts the dignity of” in the Code does not meet the standard of “detestation” or “vilification” and should be severed from the legislation.

This approach faces a number of challenges, which the judges make their best attempt to address. How can this standard of detestation or vilification be identified? Feelings, even the deepest, most extreme feelings that result from hatred, are inherently subjective. We can’t rely on the feelings of a potential victim of hate speech; after all, people react to different ideas in different ways. Instead, the Court lays out what it calls an “objective” approach: would a “reasonable person,” knowing the full context and circumstances of the hateful speech, believe it likely to raise the risk of discrimination or some type of societal harm?

Courts have long relied on this mythical reasonable person to deal with the interpretation and application of inherently subjective concepts. The problem, of course, is that reasonable people might reasonably disagree. To some extent the Court has reinforced the idea that hate speech, like pornography, is something a reasonable person knows when he or she sees it. The Court hasn’t put forward a definition so much as it has attempted to lay down a threshold for acceptable speech. But that line is obfuscated by the very emotions it is purportedly based on.

A more fundamental problem is that the Court’s notion of a risk of “harm” that results from hate speech is ill-defined. Shouldn’t there be evidence that the expression of hatred had actual discriminatory effects? The judges acknowledge that the Taylor case was subjected to criticism along those lines: the Court’s approach does not do enough to ensure limits on free expression were “demonstrably justified.”

Today’s decision responds to these concerns by saying such criticism “ignores the particularly insidious nature of hate speech. The end goal of hate speech is to shift the environment from one where harm against vulnerable groups is not tolerated to one where hate speech has created a place where this is either accepted or a blind eye is turned.” As a result, the best approach to take is one of a “reasonable apprehension of harm.”

While laudable in theory, the scenario where hateful speech produces an actual harmful environment for vulnerable groups seems to imply a lowest common denominator expectation of the reaction broader society will have to the hateful speech. Why expect, however plausible, that a harmful environment will be produced rather than the opposite: where individuals drown out the haters with expression of their own?

The argument that hate speech is “insidious” doesn’t appear to give sufficient weight to free expression. In fact, the “reasonable apprehension of harm” approach seems to act in direct contradiction to the Court’s stated position that the standard of review should be based on the effects of the speech rather than the ideas contained within.

It is highly likely that the Court took so long to render a decision in this case because the judges had to work hard to come up with unanimous reasons everyone could agree on. (A rare 6-0 judgment, the result of the retirement of Justice Deschamps, who took part in the hearing but retired more than six months before the decision was rendered and so could not sign on). The result is a bit of a messy compromise, where the standard laid out for lower courts to follow ultimately boils down to “some hateful ideas are okay, but not the really hateful ones that a reasonable person thinks might cause discrimination or harm.”

For some people, this will all seem eminently reasonable. For others, it is a line-drawing exercise fraught with difficulty.

Emmett Macfarlane is an assistant professor of political science at the University of Waterloo.