These Snowbirds are turning 50. But don't ask them about their age.

After a tragic year and persistent questions about the iconic aerial acrobats' uncertain future, the Snowbirds fly back to their spring training ground 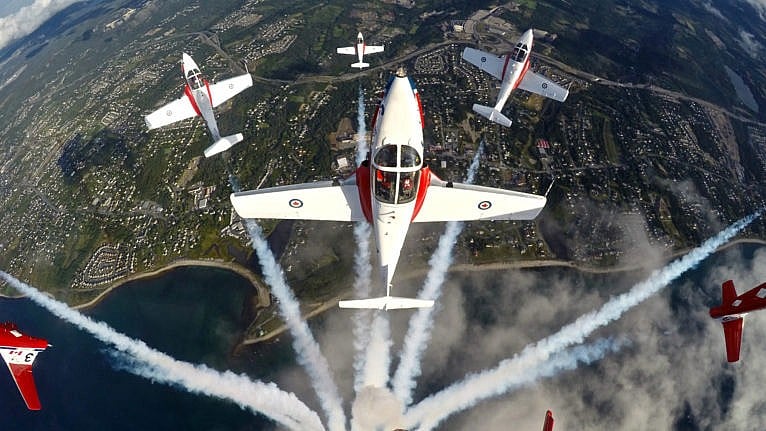 The Snowbirds’ Tutor jets were designed in 1954 and were meant to be retired last year, but DND now plans to keep them airworthy until 2030 (Courtesy of DND-MDN)

Tom Dishlevoy swears that when he watches the Snowbirds dart around the Comox Valley, there’s one spot where he can get close enough to see right into the pilots’ eyes. When the famed Tutor jets descend sharply in the direction of Air Force Beach, an aptly named patch of sand adjacent to the home of 19 Wing on Vancouver Island, onlookers like Dishlevoy have the best seat in the house—maybe the world—to watch aerial acrobatics.

Dishlevoy was raised with an uncommon Tutor pedigree. His father, Roy, joined the Canadair team that designed the jets in 1954 and watched the airplane’s maiden flight in suburban Montreal on a bitterly cold day in January 1960. Roy, an engineer, eventually left the aerospace industry for a long career at ATCO in Calgary, and eventually moved to Comox with his wife, Shirley, to be closer to Tom and his growing family. It was pure coincidence that the Dishlevoys lived in the town where the Snowbirds train every spring.

The jets didn’t make it to Vancouver Island last year, their typical routine upended by a global pandemic that halted their 2020 season. In April, the team was called into service for Operation Inspiration, a string of coast-to-coast flypasts meant to cheer up homebound Canadians. On May 17, a western tanager in Kamloops, B.C.—the home of another of Dishlevoy’s children, Eleanor, as chance would have it—collided with the engine of Snowbird 11. When the plane stalled, public affairs officer Capt. Jenn Casey and the pilot, Capt. Richard MacDougall, both struggled to properly eject. Casey died and MacDougall was seriously injured. The pair were only seconds into a flight. Their destination: Comox.

“That mission provided a distraction, a bright light and hope,” says Lt.-Col. Denis Bandet, a pilot and the commanding officer of the Snowbirds’ squadron. “It was a complete high to a complete low in a matter of minutes.” Casey had come up with the mission name, and “did the work and had the motivation of 10 people,” he says. After her death, the team laid low at a hotel in Kamloops. Their tour was paused indefinitely, and the planes eventually relocated to their Prairie training base in Moose Jaw, Sask.

It was, to say the least, a period of soul-searching—and of questions about the program’s future. Since its inception, nine people have died in Snowbirds accidents. Each time, the Air Force conducts a full investigation and makes changes, while the squad remains popular with adoring crowds across Canada. But with every tragedy, calls to end the team’s long run seem to grow louder.

That’s in part because the Tutors were supposed to retire a long time ago. The Department of National Defence had planned to replace them by 2020, but it now aims to keep them airworthy until 2030, at a cost of as much as $100 million. An archived DND website pegged their eventual replacement at between $500 million and $1.5 billion.

Bandet concedes that “moments of doubt creep in” about how much longer the show can go on. But he steers the conversation toward the Tutors’ amazing longevity, sustained by masterful maintenance crews, and how he sometimes wishes he could ask someone like Roy Dishlevoy if he ever imagined his plane would be flying in 2021. The elder Dishlevoy died six months before the pandemic, but the Tutors’ impressive lifespan speaks to how seriously he took his work. “I think he missed out on a lot of fun in life because he was such a perfectionist,” says Shirley.

RELATED: What it feels like to fly with the Snowbirds

Now, the iconic team is headed back to the Comox Valley as they gear up for their 50th season—almost 60 years after the Air Force ordered the jets, and almost seven decades since Roy Dishlevoy started playing with schematics. Bandet, who’s flown about 2,000 hours in a Tutor, says it’s “hard to sneak around” town in a bright red or blue jumpsuit. That’s by design, though there will be little mingling with the locals this year.

Of course, the jet engines are hard to ignore when they’re flying over downtown. “You hear them and go looking for them,” says Shirley, who has joined Roy and Tom on Air Force Beach over the years. “They’re beautiful in the sky.” Tom says his father was humble about his career at Canadair, and actually spent most of his life passionately studying the Norseman bush plane—building and flying a scale model. He had no idea when he moved to Comox that the Snowbirds regularly visited. And he wouldn’t let Tom, an architect who designed the local airport building and could pull some strings, arrange a ride-along in a Tutor. Still, the designer’s first creation always seemed to follow him. A former Snowbird, Scott Greenfield, even lived next door for a time.

The Snowbirds are training for a full season, and Comox is the dress rehearsal. By late April, though, some of the events on the team’s 2021 program—appearances in Brantford, Ont., as well as Niagara Falls, N.Y.—had been cancelled. Popular shows in Abbotsford, B.C., and Toronto are tentatively still a go, but most of the sure bets seem to be south of the border. They’re headliners, for example, at the California Capital Airshow in Sacramento.

In the meantime, the Snowbirds will dance through the skies above Comox. And Shirley, now 87, will keep an eye out the window. “As far as I’m concerned,” she says, “they’re coming home.”

This article appears in print in the June 2021 issue of Maclean’s magazine with the headline, “Return of the Snowbirds.” Subscribe to the monthly print magazine here.