As they balance school, a job and student debt, Canada's young climate activists are leading the fight for the future of the planet 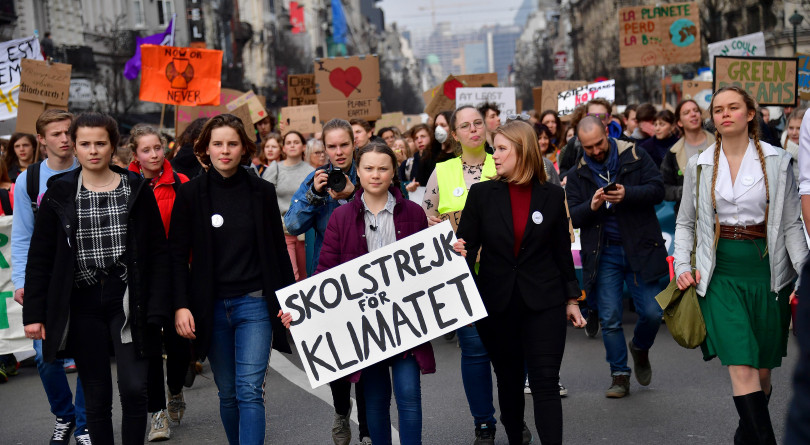 Swedish 16-year-old climate activist Greta Thunberg at a march for the environment and the climate organised by students, in Brussels, on Feb. 21, 2019. (Emmanuel Dunand/AFP/Getty Images)

Emma Lim, a first-year student at McGill University, launched the “No Children, No Future” campaign on Sept. 16 with more than 200 young Canadians pledging not to have any children until governments ensure a safe future for them. As of this week, over 600 had signed on.

“We’re terrified about the future,” says Lim. “I am facing a future of economic instability, of food scarcity and extreme weather,” she says. “Bringing a child into that future is the scariest thing I can imagine.”

Reversing “this very difficult decision” would mean being able “to think of the future with hope instead of fear” she says.

Lim, 18, was inspired by Swedish teenager Greta Thunberg’s “Fridays for Future” school strikes, and was the first school-striker at her London, Ont., high school last winter. She went on to co-organize the Climate Strike Canada Network that held Canada’s first national school strike last May when students from over 100 cities and towns went on strike to call for urgent climate action.

READ MORE: This summer, Canada’s land of ice was on fire

On Friday, Sept. 27, school-strikers from more than 400 schools will be among the hundreds of thousands of young climate activists who intend to shut down the city of Montreal, along with many more cities and towns in Quebec and across Canada. They will be joined by millions participating in Global Climate Strikes in more than 120 countries who are demanding actions to abolish fossil fuels.

This is just the most high-profile event in a new wave of climate activism in Canada that is being initiated and led by youth like Lim who have spent their entire lives under the shadow of a worsening climate crisis.

Their activism is a long way from recycling or banning plastic water bottles or past environmental crises that proved solvable like the ozone hole. It’s about climate justice: transforming Canada into a fossil-free society that respects Indigenous rights and sovereignty and is based on equity, social justice and participatory democracy.

Young activists are a far larger and a more diverse group than they were 10 years ago when Amara Possian first became involved. “They’re also smarter and more sophisticated. I’m 30 and I feel old around them,” says Possian, who is currently with the grassroots group 350.org Canada.

Youth have always been a big part of the climate justice movement, she says. This past year has seen a new surge of activism, in part in response to Greta Thunberg, but for many the tipping point was the Intergovernmental Panel on Climate Change (IPCC) 1.5C Special Report released in October 2018. And, in particular the framing of only 12 years to limit climate change catastrophe.

RELATED: Naomi Klein: ‘We are seeing the beginnings of the era of climate barbarism’

“There are so many new groups and organizations popping up, I can’t keep track,” says Catherine Abreu, executive director of the Climate Action Network Canada, an umbrella group with dozens of environmental organizations as members. The student school strikers are independent, organizing themselves through social media.

“It’s impressive they can juggle school, part-time work and worries about student debt to not only participate but to lead,” Abreu says, adding that youth know their futures are on the line with climate change.

“We are anxious about our future,” agrees Possian. “I really don’t think older people understand how this is affecting us.”

Modelled after the Sunrise youth movement and the Green New Deal in the U.S., the Canadian version involves an ambitious plan to tackle climate change and inequality together.

Millennials make up the largest voting block in this election and “Our Time” has more than 4,000 volunteers across the country with more joining every day. “They want to see Canadian champions of the Green New Deal like Alexandria Ocasio-Cortez in office,” says Possian. At 29, Ocasio-Cortez is the youngest person ever to be elected to U.S. Congress; she has called the fight to tackle climate change her generation’s “World War II.”

Nayeli Jimenez, who came to Canada as an international student from Mexico, is an “Our Time” volunteer in Vancouver. Jimenez says the more you know about the impacts of climate change—including that it makes hunger and poverty worse in poorer countries like Mexico—“the harder it is to look away.”

Jimenez acknowledges that she and many of her friends are sometimes overwhelmed by what’s called climate grief: feelings of depression, sadness and helplessness over climate change. “We’re witnessing the ever-worsening impacts of climate change every day. This is our future.”

Full-time organizers are already on campuses across the country asking students which issues they care about and explaining how government policies affect those issues. “We don’t talk about parties or leaders,” says Valiquette, adding that climate change, along with high costs of rental accommodation and student debt, are top concerns.

Students get excited about voting when they learn “about the power of our generation. We [youth ages 18 to 34] represent 37 per cent of all eligible voters,” says Valiquette. “Politicians need to listen to us and do something about the issues we care about.”

Student and youth activism will only increase after the election, says Sofia Descalzi, national chairperson of Canadian Federation of Students (CFS) and a former student at Memorial University in St John’s. “We have to create a future where we, and generations to come, can have a life. We’re not going to stop until we’ve made a just transition to a green economy.”

In the same sense, the Global Climate Strike on Sept. 27 is a kind of coming-out party, making the world aware of the global climate justice movement. On that day, Greta Thunberg will be in Montreal, marching through the streets with perhaps 200,000 others including youth from Indigenous communities from northern Quebec. Students from Quebec universities, colleges and high schools will be on strike as will seven unions, 400 community groups and a wide range of businesses.

“Even some of the local dépanneurs will close for the day,” says Léonard Leclerc, media relations person for the Quebec student climate activist group “La Planète s’invite à l’Université.”

“We hope our climate strike in Quebec can be an inspiration for the rest of Canada,” says Leclerc. “The message youth want to send to the rest of Canada is: “Are you listening to us? Are you paying attention to the science?” he said.

This a matter of conscience, not how old you are, says Leclerc. “Youth are making climate justice the top priority in their lives.”

Maclean’s is one of more than 250 media outlets participating in Covering Climate Now, an international journalism initiative co-founded by The Nation and Columbia Journalism Review. We will be publishing and sharing original coverage all through the coming week in the lead-up to the UN’s Climate Action Summit, to be held in New York on September 23. The summit is an attempt to spur world leaders to develop new plans to reduce carbon emissions by 45 per cent over the next decade and reach a target of zero net emissions by 2050.