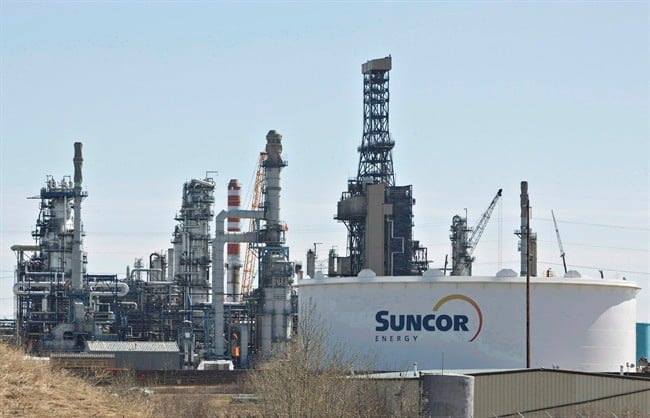 The Suncor Refinery in Edmonton is seen on Tuesday, April 29, 2014. An Ottawa-based think-tank says Canada’s oil extraction industry is headed for a $10- billion loss this year, the first time on record it has failed to be profitable two years in a row. THE CANADIAN PRESS/Jason Franson

OTTAWA – Canada’s oil extraction industry will have to ride through $21 billion in losses before it returns to profitability some time in 2017, according to the latest estimate from the Conference Board of Canada.

The Ottawa-based think-tank says the industry is headed for a $10-billion loss this year after a record-setting $11-billion loss last year, the first time on record it has failed to be profitable two years in a row.

To recover going forward, the industry will need to keep a much tighter lid on costs and productivity, said Carlos Murillo, who authored the report released Tuesday.

“They really need to change their mindset and operating way going forward for them to be more successful in a lower price environment,” said Murillo.

Over the last decade operating costs increased by an average of 10 per cent a year as material costs and wages all along the supply chain increased — two areas producers can have some influence while waiting for prices to recover, said Murillo.

“They can control their own wages, that’s one of the things that I think are a lesson learned for them. And they can be more efficient with how they use materials and all the inputs they need for producing oil,” he said.

Within the industry there has been a wide range of financial results, with some of the more successful companies owning refineries or hedging prices.

“It really ranges depending on what kind of strategy they have in terms of how they sell their products and how they manage their costs,” Murillo said.

But overall, the report found the industry has been unprofitable from the last quarter of 2014 and isn’t expected to climb out of negative territory until the second quarter of 2017.

“One hundred per cent of the companies’ balance sheets have been very severely impacted,” said Barry Munro, head of oil and gas at financial consultancy EY. “The decision to deploy capital, I think people are just going to be a lot more prudent and cautious.”

He said companies will have to focus not only on keeping costs down when the industry starts to turn around, but also making sure they’re not growing for its own sake.

“The industry is going to focus on how to create value, not just grow,” said Munro.

And while costs have started to come down, it hasn’t happened fast enough and dropping productivity has made profit margins even worse this year than last.

Murillo estimates that margins were negative 19 per cent this year for the worst on record, and negative 18 per cent last year. He estimates the industry should return to a narrow 0.3-per-cent profit margin by 2017 before ramping up to 3.6 per cent by 2020.

He said the outlook is dependent on companies achieving more cost cutting, as well as on oil prices recovering. But he said the estimate of US$67 a barrel by 2020 is relatively conservative.

“It’s definitely a hopeful outlook, but the counter argument is that by the time we do see profitability increasing again, it’s almost three years by the time that happens,” said Murillo.