Consumers were outraged to learn about the price fixing, but no one who shopped for bread in recent years was surprised to hear prices were pushed up

Earlier this week Loblaw Companies Ltd., Canada’s largest grocery chain, admitted it took part in an industry-wide scheme to jack up the price of bread. The collusion, according to Loblaw, had gone on for more than 14 years.

READ: Here’s how to get $25 from Loblaws after it admitted to fixing bread prices

Consumers have expressed outrage at the revelation, though anyone who has shopped for bread in recent years certainly wouldn’t be surprised to hear prices were pushed up. A glance at Statistics Canada’s data on food prices and the consumer price index, which compares the cost of a fixed set of goods and services over time, seems to show the price fixing in action. Throughout the 1990s prices for bread moved in tandem with other food prices and the overall consumer price index. Then just after the price-fixing scheme began, bread prices started to climb dramatically. 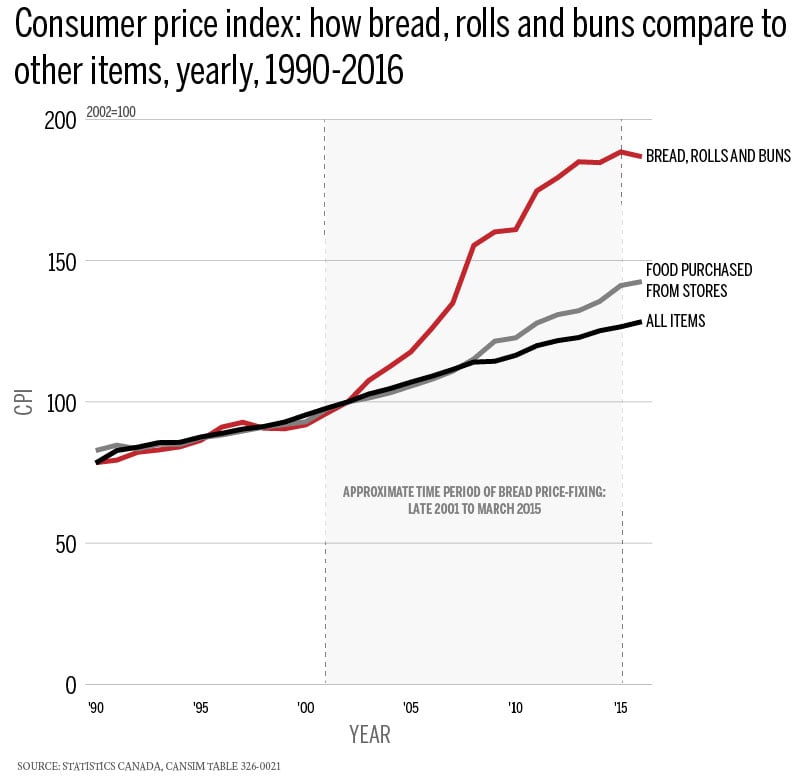 While the StatsCan data can’t put a dollar amount on the increase in bread prices, it can offer insight into how much bread prices changed compared to other foods bought at Canadian grocers over that time period.

While several other grocery stores are under investigation, Loblaws, along with its parent company George Weston Ltd, will receive immunity from criminal charges for tipping off the Competition Bureau and co-operating with its investigation.

Starting in January, Loblaws will offer customers who bought bread before March 2015, a $25 gift card as a goodwill gesture.

READ: Loblaw could owe you much more than $25