This Fredericton Tim Hortons drive-through is a notorious traffic nuisance

The lineup of cars waiting to turn into the Timmies often clogs a major street in the city. The solution is a $40,000 taxpayer-funded road redesign—and not everyone is happy about it. 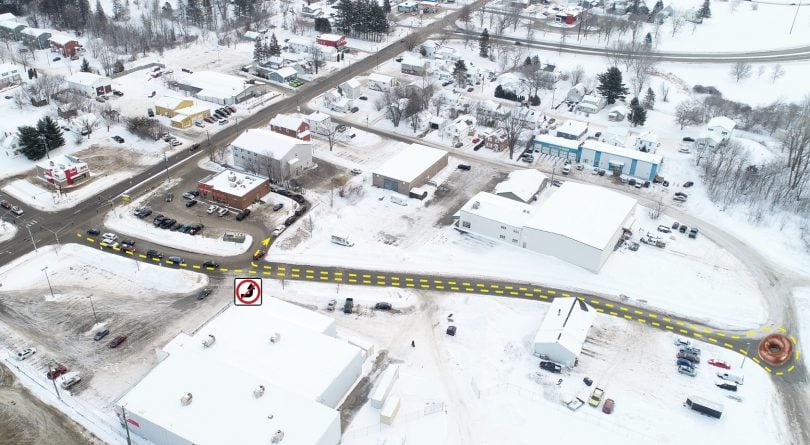 The council-approved solution rerouts cars so they can turn around in what one might call a traffic doughnut (Photograph by Atlantic Drone Imaging; photo illustration by Stephen Gregory)

They start slowing down en masse around 7:30 a.m., rummaging in their consoles for change, inching forward to form one long train of cars, puffing exhaust in their quest for a red paper cup of stewed caffeine.

It’s the drive-through queue for a Tim Hortons on Main Street in Fredericton, a traffic quagmire that’s become a nuisance for commuters and local businesses—and one that’s raised questions of just how far a community should go to accommodate Canada’s iconic coffee-and-doughnut store.

The lineup of cars waiting to turn into the drive-through off Wallace Avenue, which intersects with Main on the city’s north side, blocks the entrance to a popular local hardware store. Oftentimes, the queue backs up onto Main Street itself, clogging what is a major thoroughfare in the New Brunswick capital.

Susan Clarke, who co-owns the Home Hardware on Main with her husband, Rod, frequently finds herself trapped amid 20 or more idling cars while trying to get to work. Despite a no-stopping sign, vehicles look all but parked on Main, waiting with their turn signals blinking even when the traffic light at Wallace is green.

“If you honk, they kind of look at you like you’re crazy,” says Clarke. “They just don’t understand they’re causing a problem.” Her husband has even climbed out of his car and asked drivers if they can move so he can reach his store—to no avail.

Cities across the country have been grappling with whether drive-throughs, for all their convenience, fit into our 21st-century ideals of urban design. Many have passed bylaws banning or limiting them—including Fredericton, which in 2013 banned new ones from being built downtown. Drive-throughs to be built in other locations in the city would have to meet conditions around lot size, queueing space and pedestrian access.

But older ones remain, posing a challenge to city officials trying to balance their popularity with demands for traffic efficiency and environmental responsibility. After studying the problem at Main and Wallace, Fredericton municipal traffic engineer Jon Lewis struck upon the idea of building a turnaround at the end of Wallace, a secondary street most drivers use to access the drive-through.

The idea is to draw away the Tim Hortons traffic, allowing motorists to reverse direction and make a right turn, instead of a left, to reach their double-doubles. Says Lewis: “We finally hit the point where there’s an opportunity to at least try something.”

There was a public-interest rationale behind his idea. In addition to causing headaches for local businesses, the log-jam on Main Street was sending drivers spiralling into fits of road rage. They would speed around vehicles, putting pedestrians and themselves at risk. So, council unanimously adopted Lewis’s solution, with work slated to begin this spring—even though it meant spending $40,000 to re-engineer the road.

To put it mildly, not everybody sees this as taxpayer money well spent. At a time of climate crisis, a solution tailored to motorists idling in doughnut lineups drew derision—more so in a city that boasts the first Green Party MP elected in Atlantic Canada. (That MP, Jenica Atwin, declined to speak on the matter.)

“At first I couldn’t believe it,” says city resident Susan O’Donnell. “In my mind, Tim Hortons should be paying if they’re causing traffic problems. Why the heck should I have to pay for it?” To O’Donnell, the move invites a bigger question: What is the real cost of a cup of coffee, if you factor in the public infrastructure and environmental and health impacts of idling cars?

Shauna Chase, who mocked the decision in the Manatee, a satirical New Brunswick website, agrees. “It’s pretty crazy to me that the city has resorted to changing the structure of the streets and traffic to accommodate people’s addiction to bad coffee,” she says.

A request for comment from the Main Street store was directed to a Tim Hortons corporate spokesperson, who did not directly answer the criticism, but noted that Fredericton’s population has grown over the decades, which has affected traffic. “The owner was consulted about this proposed change,” she added, “and is working closely with the municipal government and city engineers as they look to implement a solution in the area.”

Aversion to drive-throughs runs deep in modern urban planning, which emphasizes safety, noise reduction and walkability. A University of Alberta study published in 2018 in BMC Public Health found 27 municipalities in Canada had enacted full or partial bans on fast-food drive-throughs, many of them in Ontario and British Columbia. Such rules, the study concluded, can improve population health as part of a comprehensive, multi-pronged strategy.

But Clarke, the Home Hardware co-owner, thinks the turnaround will relieve the congestion, noting that customers are turning up at her store irked after waiting 10 minutes to cut through the coffee queue. Some have threatened to never come back. Either way, she adds, cars will still be idling out there every morning, just facing a different direction. “It would be better,” she says simply, “if you weren’t allowed to wait in line on the street.”

Updated Feb. 3, 2020 to include response from a Tim Hortons spokesperson

This article appears in print in the March 2020 issue of Maclean’s magazine with the headline, “Driven around the bend.” Subscribe to the monthly print magazine here.