This just in: The PM has been phoning cabinet ministers

Paul Wells: Canada faces some hard questions on the Ukraine file. The latest release from the PMO suggests this government has nothing to say about it. 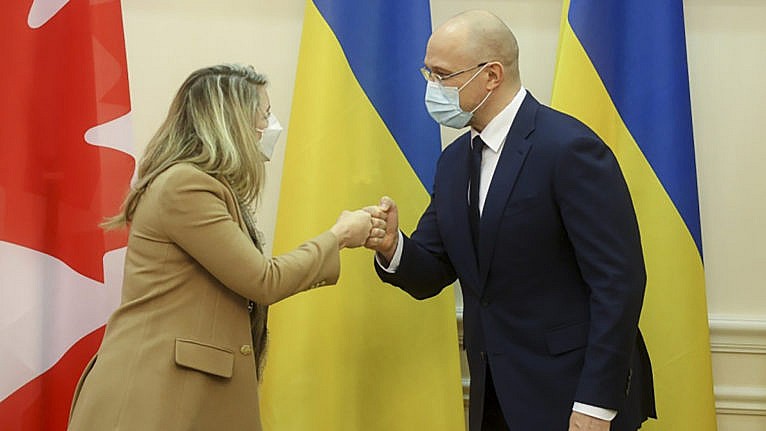 Ukraine's Prime Minister Denis Shmygal and Minister of Foreign Affairs Melanie Joly greet each other during their meeting in Kyiv, Ukraine on Jan. 17, 2022. (Ukrainian Prime Minister Press Office via AP)

Certain reflexes are learned from experience, which helps explain why lately I open emails from the Prime Minister’s Office in something approximating the way Jeremy Renner opened packages in The Hurt Locker. A wince, a clench, a glimpse through half-shut eyes: what fresh hell have we here?

Last night, reporters covering the federal government received a “readout”—the term of art for an artfully mealy-mouthed description of a conversation the Prime Minister is supposed to have had with somebody—in their inboxes. I will quote this readout in full:

During the call, the Prime Minister and ministers discussed the latest developments in Ukraine. They condemned Russia’s military buildup in and around the country as well as Russia’s annexation and illegal occupation of Crimea. They underlined the need for Russia to de-escalate the situation and uphold its international commitments, and emphasized Canada’s commitment to continued coordination and engagement between allies and partners.

Minister Joly, who is currently in Ukraine, provided an update on her work with her Ukrainian counterparts in support of the country’s sovereignty and territorial integrity in the face of Russian aggression. She met yesterday in Kyiv with Ukraine’s Prime Minister, Denys Shmyhal, and Deputy Prime Minister for European and Euro-Atlantic Integration, Olga Stefanishyna, and met today with the President of Ukraine, Volodymyr Zelenskyy.

Minister Anand highlighted the role of the Canadian Armed Forces (CAF) for military training and capacity building in Ukraine through Operation UNIFIER, which has trained more than 12,500 members of Ukraine’s Security Forces since the mission began in 2015. Approximately 200 CAF personnel are currently deployed to Ukraine under Operation UNIFIER. The minister noted she recently spoke with her Ukrainian counterpart.

Together, the Prime Minister and ministers raised the need to find a peaceful solution through dialogue. They reaffirmed Canada’s steadfast support for the sovereignty and territorial integrity of Ukraine, and considered current and future assistance to Ukraine. Prime Minister Trudeau emphasized that any further military incursion into Ukraine would have serious consequences, including coordinated sanctions.

The Prime Minister and ministers agreed to continue closely monitoring the situation over the coming days and weeks.

For context, it’s worth remembering that Russia might invade Ukraine, again and for keeps, very soon; that this would constitute a large war in Europe, the sort of thing many people prefer to avoid; and that Canada’s interests in the whole matter are acknowledged, by the government’s all-powerful marketing department, to be so pressing that the latest Global Affairs Minister is currently in Ukraine.

LONG READ: The future of the Liberal Party—without Justin Trudeau

For further context, I should add that meetings or phone chats between prime ministers and their cabinet ministers are not normally transcribed and emailed to the gallery. In fact, government websites explain in great detail why they shouldn’t be. I checked, and we didn’t get a “readout” of discussions over the appropriateness of a criminal trial for SNC-Lavalin (“Minister Wilson-Raybould said that, actually, she has made her decision. The Prime Minister agreed to send a never-ending stream of aides and factotums to bug her over the coming days and weeks, and noted that this would not be deemed to constitute ‘pressure'”)  or about options for managing payment to volunteers (“Nobody finding the notion of payment for volunteer work paradoxical or having any questions about WE Charity, it was a short discussion”).

Readouts usually only describe discussions between the Prime Minister and other foreign leaders. Or provincial premiers. Or, sometimes, conversations with the opposition leader that haven’t actually happened. I’m belabouring these old embarrassments because my point here today is to emphasize the gap between the tone the PMO hopes to conjure and the effect it actually produces. On an ordinary day, that gap defines the scale of a farce. On serious days it approaches the tragic.

This is not, however, the first time we’ve been sent a readout of what would otherwise have been an internal cabinet-level discussion. For a while after the 2019 election we were getting them quite frequently, because the government’s all-powerful marketing department had come up with the notion of an “Incident Response Group”—the PM plus varying lists of ministers and officials—who would meet to sort out crises. There have been fewer of those lately, whether because “Incident Response Group” didn’t poll as well as hoped or because everything is now a crisis it’s hard to say.

Anyway, on the latest meeting I’ll leave it to readers to puzzle through the participant list—Bill Blair? Really?—and to guess at how closely the written narrative reflects any real conversation. I’ll add only a few things.

First, if the Prime Minister of Canada had anything to say about Ukraine yesterday, he could have been on the evening news on half an hour’s notice. The same with anyone on that call. This Prime Minister seems to underestimate how easy it is to tell when he has nothing to say. The part of the communiqué where the Minister of National Defence apparently reads aloud the page in her briefing book listing troop levels in Eastern Europe is perhaps less impressive than it’s meant to be. The interesting questions are not answered or even acknowledged. If 140,000 Russians roll across the border, do the Canadians fight or come home? If overwhelmed would they be reinforced? Call us when you have answers. Or, come to think of it, never mind; we may find out soon anyway.

Second, and more broadly, everyone knows the real questions here. Should Ukraine be in NATO or, pending membership, defended by NATO with military force as though it already were? Should the pro-Western half of Ukraine, which lately includes its national government, receive lethal arms from NATO countries so it can participate in its own defence?

These are hard questions. They’re made harder by the news that the United States president, who alone could plan for a military rebuttal to a Ukraine invasion, has already called the likely invader to tell him he needn’t worry about anything worse than a salty banking invoice.

Let me upset some of my colleagues by saying this is probably the correct call. NATO is meaningless, and worse than useless, if it can’t guard its perimeter. So its members must be coherent democracies that joined the alliance of their own will and are willing to contribute to it. Defining “NATO” as “any country Vladimir Putin feels like threatening” is bad policy. This helps explain, incidentally, why Estonia and Latvia didn’t join NATO until 2004: because for the first 40-odd years of NATO’s existence they were constitutionally part of the Soviet Union, and then it took a decade and a half to get their democratic acts together. It will take Ukraine far longer, if ever. A country doesn’t need to be perfect to be in NATO—Hungary still is, for goodness’ sake—but it needs to not be a basket case.

Shipping lethal weapons is a matter of lesser consequence (though Russia could still construe it as an act of war, so, careful what you wish for), but as a practical matter almost anything that gets sent into a combat theatre is soon taken or sold and becomes fairly evenly distributed among all combatants. Not really a magic solution, then.

Short version: if Ukraine is invaded it’s substantially on its own, because Joe Biden already said so and because we need to be able to defend Latvia. I know it’s fantasy to imagine any Canadian government, especially this one, answering the hard questions as bluntly. But by the way, if you recognize the name Dominique de Villepin, it’s because once upon a time a cabinet minister from a non-superpower was willing to give blunt answers to hard questions in a crisis. In the meantime, any government activity on the Ukraine file should be understood as what it obviously is: a marketing exercise. I don’t know who’s going to break it to the PMO that the product being marketed (fecklessness) isn’t what they hoped it was (determination).

These little missives from the pit of my despair are sometimes taken as partisan broadsides, so please understand that I can’t imagine Erin O’Toole handling this hot potato with any greater agility. I concentrate on the government only because it’s the government. I do wish the view were better.

One last thing. I’m not writing this down to be sassy or to score points. I honestly wonder. When she was a journalist, Chrystia Freeland sometimes used to speak to serious people. What does she think she’s doing now?